A self-guided driving tour through Maryland and Delaware offers a glimpse into the heroine’s harrowing journey along the Underground Railroad. 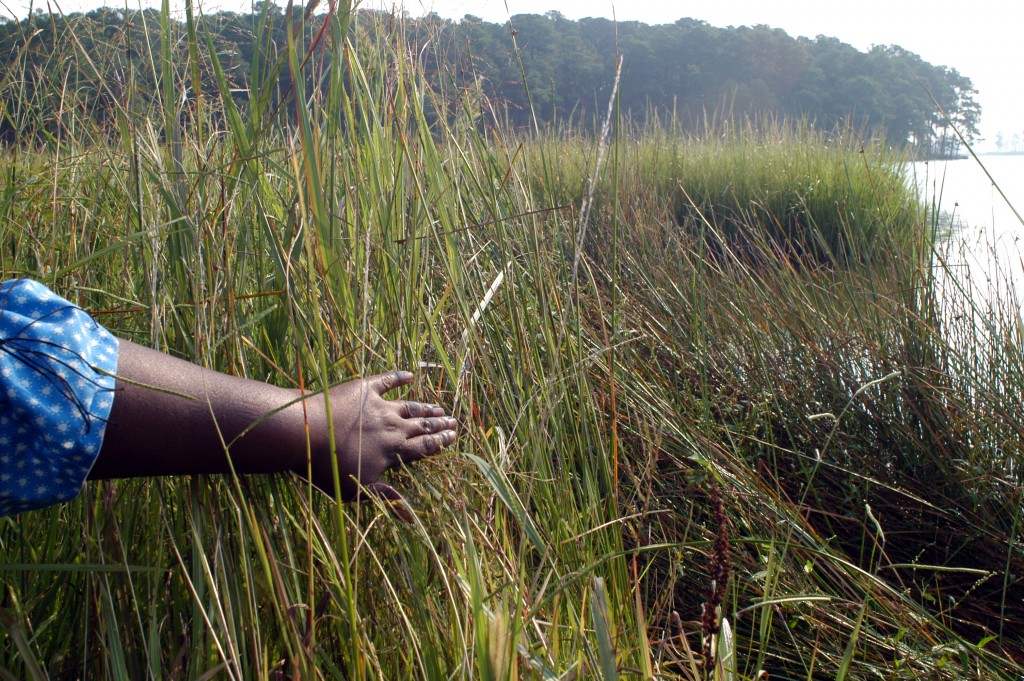 My husband and I arrive at the Brodess Farm in Dorchester County, Maryland, to quiet and serenity. The only sound is the melodious chirping of insects, birds and other wildlife this city couple can’t identify.

We are at the childhood home of Harriet Tubman, on the farm once owned by her enslaver, Edward Brodess. In one respect, I am in awe of the site where the mighty Tubman spent her formative years. It was here that she began to build the courage that ultimately precipitated her harrowing escape to freedom in 1849. She would return 13 times to lead about 70 others north.

At the same time, I am overwhelmed with emotion as I reflect on how savage this now seemingly peaceful place was for enslaved people like Tubman. History tells us she feared she might be sold to another plantation, never to see her family again. She endured beatings and had no control over her fate.

This was the first of three October outings I would spend making my way along the self-guided driving tour of the Harriet Tubman Underground Railroad Byway. The Brodess Farm in Bucktown is stop 16 on the list of 45 places. Though the byway itself might be drivable in one pass, there’s too much to see in a single day. Even three days left me breezing past some of the stops (I had to skip Philadelphia entirely) and feeling as though I hadn’t fully absorbed all that there was to experience and learn. 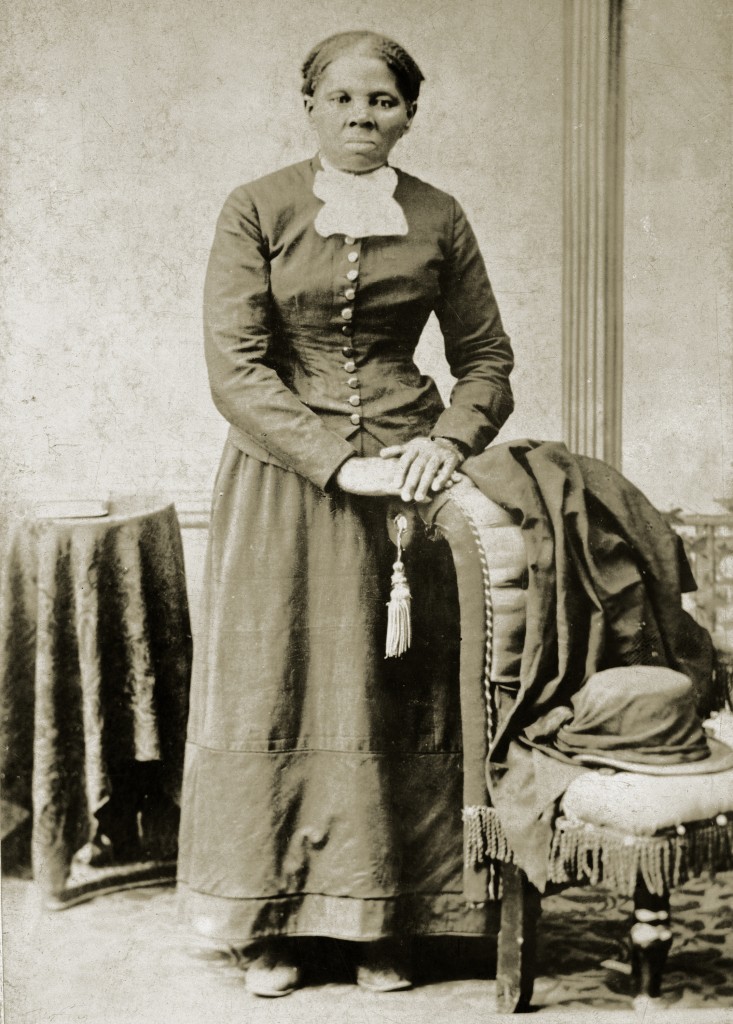 After her escape, Tubman returned 13 times to guide others to freedom along the Underground Railroad. (Photo courtesy of Library of Congress)

We made it through 18 stops that first Saturday, starting at the Dorchester County Visitor Center in Cambridge, with its beautiful water views and exhibits on Maryland’s slave history, and ending at the Bestpitch Ferry Bridge in Bucktown, which was closed for repairs the day we visited. The bridge wasn’t significant in Tubman’s life, but historic accounts indicate that fleeing slaves would stow away on ferries and hide in marshes around bridges like this one.

Snaking my way along 125 miles of Maryland’s Eastern Shore and 98 miles through Delaware, I tried to imagine the heroine’s mindset. A downloadable audio guide made the experience more immersive, as if I were in Tubman’s shoes.

At the Brodess Farm, a narrator depicting Tubman herself describes the moment she became old enough to be forced to work at a farm away from her family: “The man come after me riding horseback. He put me up front of him on the horse, and off we went.”

She soon missed her family. “I used to sleep on the floor in front of the fireplace,” the dramatization continues. “And there I lie and cry. Oh, I cry.”

That first outing also took us to the Harriet Tubman Memorial Garden in the heart of Cambridge, across from a grocery store and off a busy street. Charles Ross, a descendant of the abolitionist, painted the mural, a portrait of her, that’s located on the site.

At the nearby Dorchester County Courthouse, where Tubman’s niece Kessiah and her two children escaped from the auction block in 1850, we walked down the steps to the spot where the auction was once held—and where a concrete block stands, although it is unclear if it is the original. We then progressed to Long Wharf, where slaves were once sold along the waterfront. 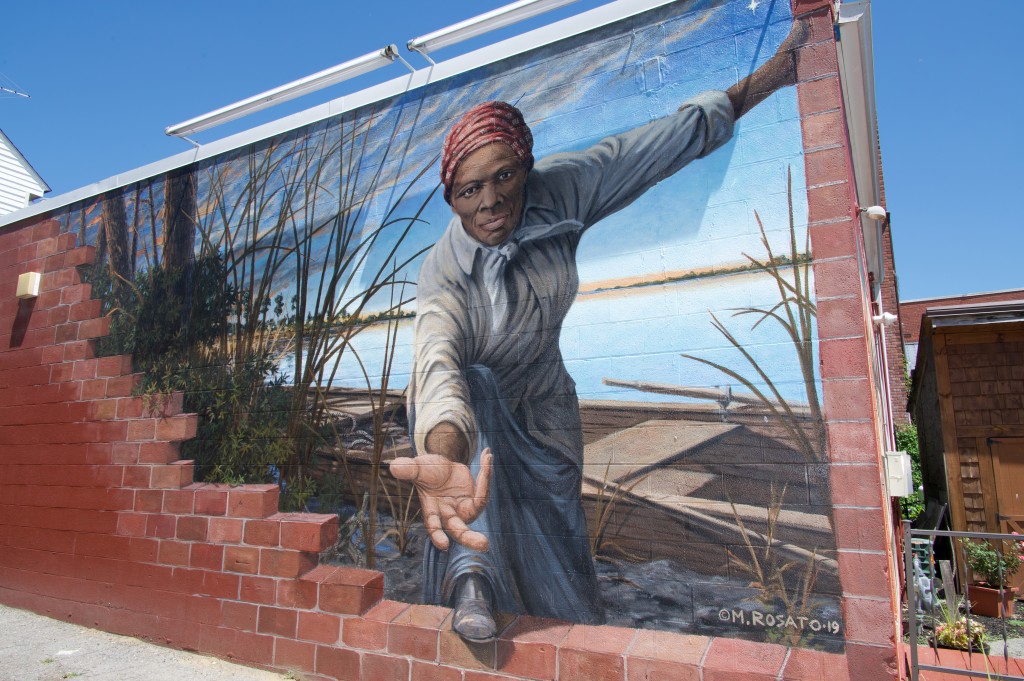 “Take My Hand,” a mural outside the Harriet Tubman Museum and Educational Center in Cambridge, Maryland. (Photo courtesy of Maryland Office of the Governor)

The Harriet Tubman Museum and Educational Center, a storefront museum on Race Street in downtown Cambridge, is a little worn but has a down-to-earth grassroots vibe that drew me in and offered what I considered one of the best parts of the tour. I met volunteers who for decades had fought for greater recognition for Tubman, took a picture next to a mural as if I were holding Tubman’s hand, listened to a jazz ensemble and watched a museum-sponsored lantern parade for local children. Lanterns once identified safe houses for escaping slaves.

The Cambridge museum has endured, even after the 2017 arrival of the 10,000-square-foot Harriet Tubman Underground Railroad State Park and Visitor Center in nearby Church Creek, which has all the staples of a modern-day museum, including a theater airing documentary films and glossy exhibits chronicling Tubman’s life, from childhood to her service in the Civil War. An outdoor nature path at the visitor center is reminiscent of the woods and marshes Tubman traversed in the dark of night to avoid capture.
Stop 14, the Blackwater National Wildlife Refuge in Cambridge, offers another example of the forested wetland terrain fleeing slaves were forced to navigate, often at their peril. I felt like an impostor as I followed Tubman’s path from the comfort of my car. 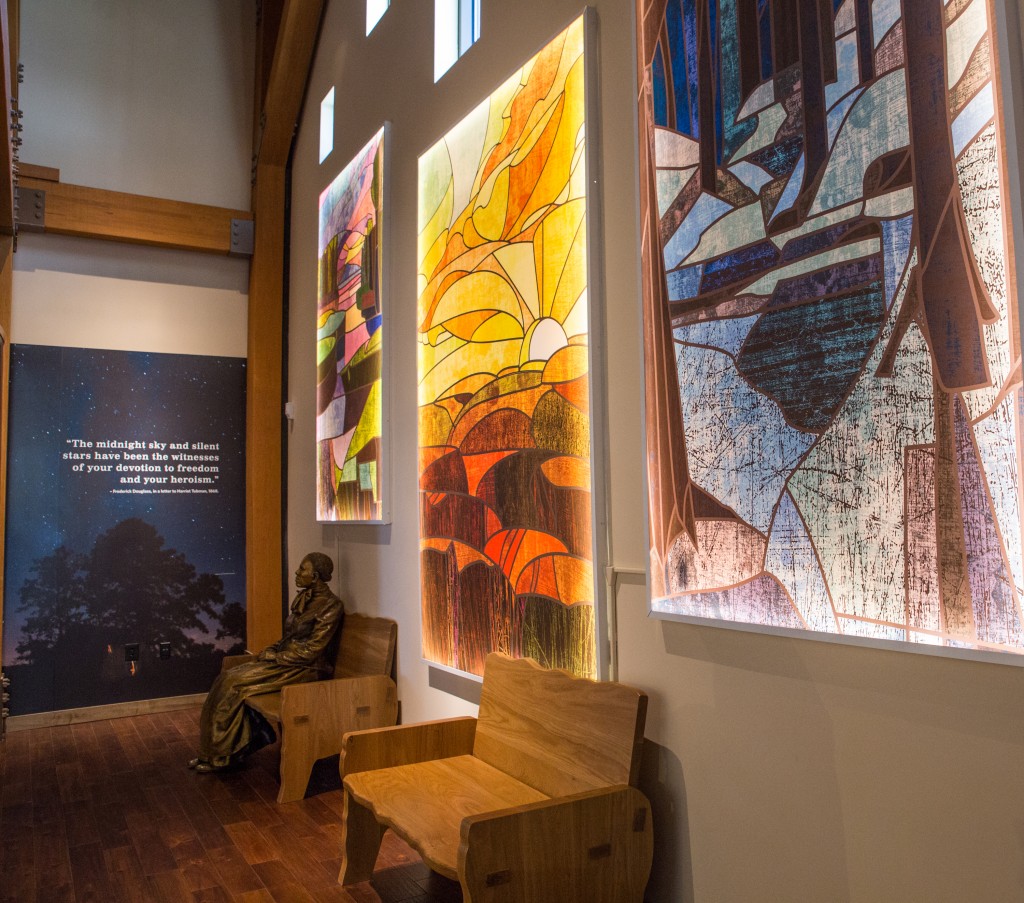 Traveling the byway reveals how historic churches, cemeteries and other landmarks are immersed in the communities that have built up around them—in some cases, with modern-day businesses and houses right next door. I found myself worrying about the preservation of these important pieces of history, while also noting how much they are treated as sacred ground.

At Stop 17 we encountered the Bucktown Village Store, a restoration of the building where Tubman was nearly killed when she was hit in the head by a 2-pound weight thrown at an escaping slave. The building was closed due to Covid restrictions, but a peek through the windows showed a setting that looks as it might have during Tubman’s era, with artifacts related to slavery. Tubman’s refusal to assist in that slave’s capture was said to be her first act of resistance. 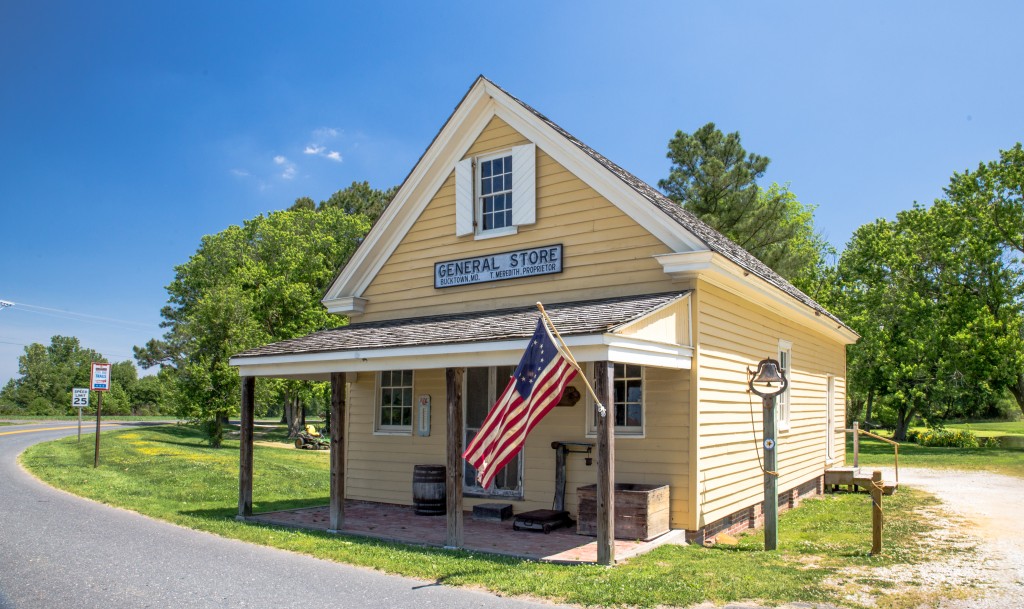 The following weekend my husband and I drove to Delaware, where the Tubman-Garrett Riverfront Park in Wilmington holds a beautiful sculpture of the abolitionist. The park overlooks the Christina River, near where Tubman once was trapped while hiding from slave catchers.

Three stops were closed when we arrived: the Center for African American Heritage in Wilmington; the New Castle Court House Museum; and the Old State House in Dover, where Samuel D. Burris, a free Black Underground Railroad conductor, was arrested, tried and convicted. I decided to return at a later date, making a mental note to check the hours of operation ahead of time.

Picking back up where we had left off in Maryland, we drove past Scott’s Chapel in Bucktown, which doesn’t offer public access but is worth a view from the outside. Brodess worshipped there, and Tubman might have as well.

At Webb Cabin in Preston, once owned by a free African American farmer, I lifted the floorboards to see the “potato hole,” a small space where slaves were hidden while trying to avoid capture. I got claustrophobic just thinking about being confined to such a tight space for hours, if not days. We ended the day at the Tuckahoe Neck Meeting House in Denton, a Quaker site that was friendly to slaves. 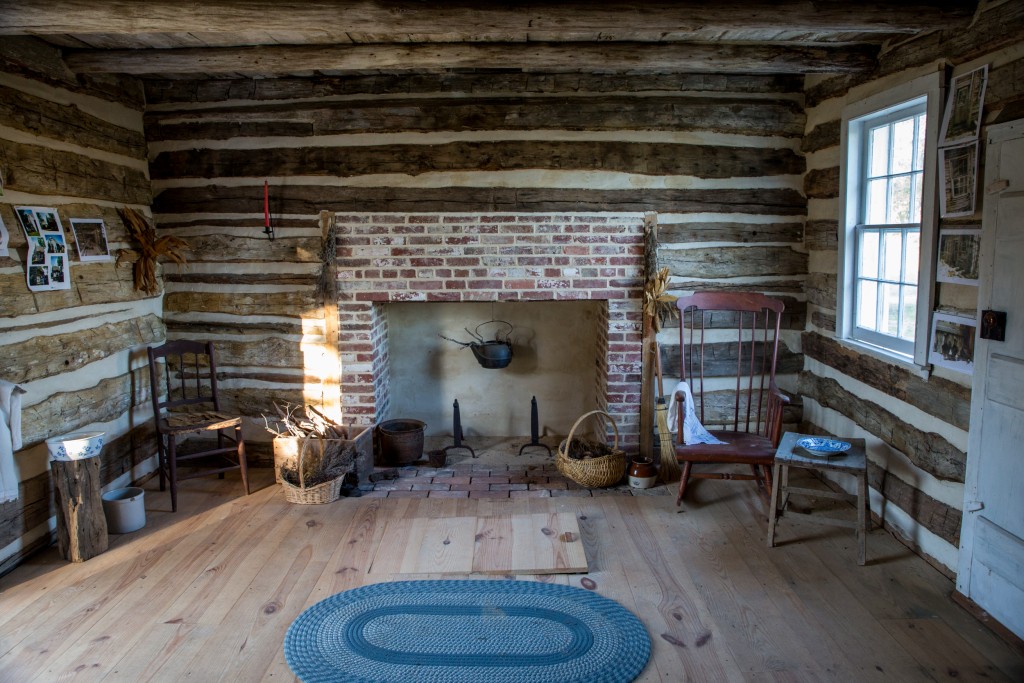 The next Saturday, my mom tagged along as I finished the Maryland part of the byway tour and revisited the Delaware sites that had been closed the first time around. We easily could have stayed a couple of hours at the 440-acre Adkins Arboretum in Ridgely, Maryland, which offers a separate audio tour and educational programs on how fleeing slaves survived in similar conditions.

I also could have spent a day hiking the trails at Blackbird State Forest in Smyrna, Delaware. “Blackbird” was one of the landmarks on Tubman’s route, according to the byway driving guide.

Back at the New Castle Court House Museum in Delaware, we learned the story of Quaker abolitionists Thomas Garrett and John Hunn, who were put on trial in 1848 and found guilty of violating the Fugitive Slave Act of 1793. New Castle was also a stop on the Underground Railroad.

One of the unanticipated joys of the byway tour was venturing off the beaten path—to places where tractors drive on the main road and produce stands operate on the honor system. We discovered small-town taverns, antiques stores, mom-and-pop retailers and beautiful water views.

As our country grapples with a racial reckoning and the accuracy of its taught history, which often glosses over slavery, I found the byway’s honest celebration of Tubman and other abolitionists refreshing. With each mile, my appreciation grew for this monumental figure, her resilience and the way she changed history.

The Harriet Tubman Underground Railroad Byway self-guided tour map, driving guide and audio guide can be downloaded, or you can stop by the Dorchester County Visitor Center for a printed copy. I found the map hard to navigate, but the driving guide—with stop-by-stop directions and a description of each site—is a good resource. There are guided tours in some of the towns and at some museums and historical sites; they are separate from the official byway tour.

Andrea K. McDaniels is a Baltimore-based writer. She is planning to spend a few more days exploring the sites she didn’t get to on the byway.