Space-saving fixtures, hidden storage and a serene palette make this condo bathroom feel bigger than it is. 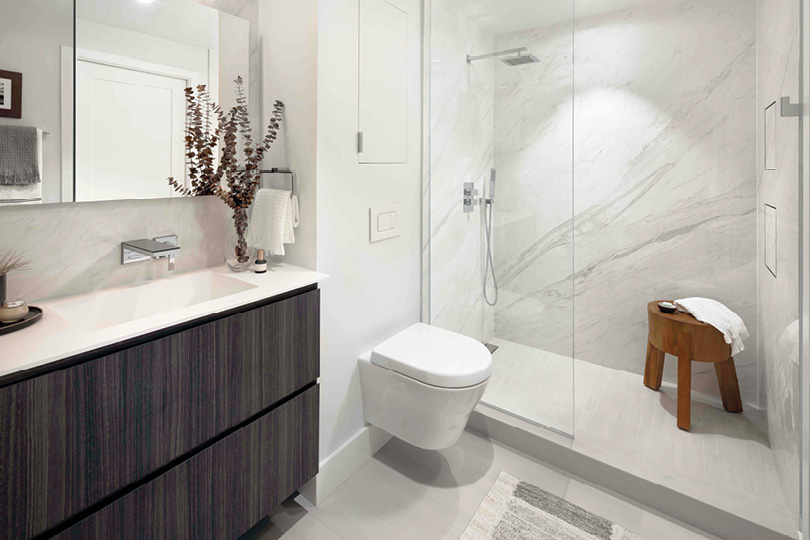 This condo bath makeover by designer Sarita Simpson makes the most of a small space. Photo by Jenn Verrier.

Catherine Orr’s high-rise condo in Courthouse was brand-new when she bought it in 2006, but, as she describes it, rather basic. She finally renovated the builder-grade kitchen a couple years ago. Next up: the boring bathroom.

Orr had gotten to know Sarita Simpson, co-owner of the D.C. firm Interior Matter, over the years, and consulted her on a few design decisions. The small bathroom was a puzzle she trusted Simpson could solve.

“I knew she got my design aesthetic,” says Orr, a lawyer whose tastes had been shaped by a stint in Japan. “I kind of like minimalist, sleek, linear—I don’t really like traditional stuff.”

In March 2020, Simpson set about making the 45-square-foot bath seem larger within the confines of its existing footprint. It feels roomier now, thanks to a design that favors clean lines, tranquil tones, hidden storage and pieces that appear to float, such as a wall-mounted toilet with a slim and simple profile.

“The more floor space you can see, the bigger a space feels,” says the designer, who introduced oversize gray floor tiles from Stone Source in D.C., and carved a recessed linen closet—one deep enough to stash neatly folded towels—into the drywall above the commode.

Orr happily ditched the tub in favor of a stand-up shower with marbled porcelain slab walls from Porcelanosa.

Understanding that her client liked the functionality of shower niches, but disliked seeing shampoo bottles on display, Simpson camouflaged two nooks from Easy Drain behind tap-to-open squares that sit flush with the shower wall. She pressed for a fixed-glass shower panel, knowing a swinging door would cut into the room’s precious square footage. “We studied that for a while—thinking about the best way to make that look kind of invisible,” Simpson says.

A bright white Corian counter sits atop an espresso-hued, wall-mounted vanity with hardware-less drawers that provide even more storage. The vanity and the mirror above it (which conceals a large medicine cabinet) have built-in outlets and docks that keep electric toothbrushes and other appliances out of sight when not in use.

Orr is thrilled with her custom space. For years, she says, her old bathroom left her feeling drained. Now every day is like a rejuvenating trip to the spa.