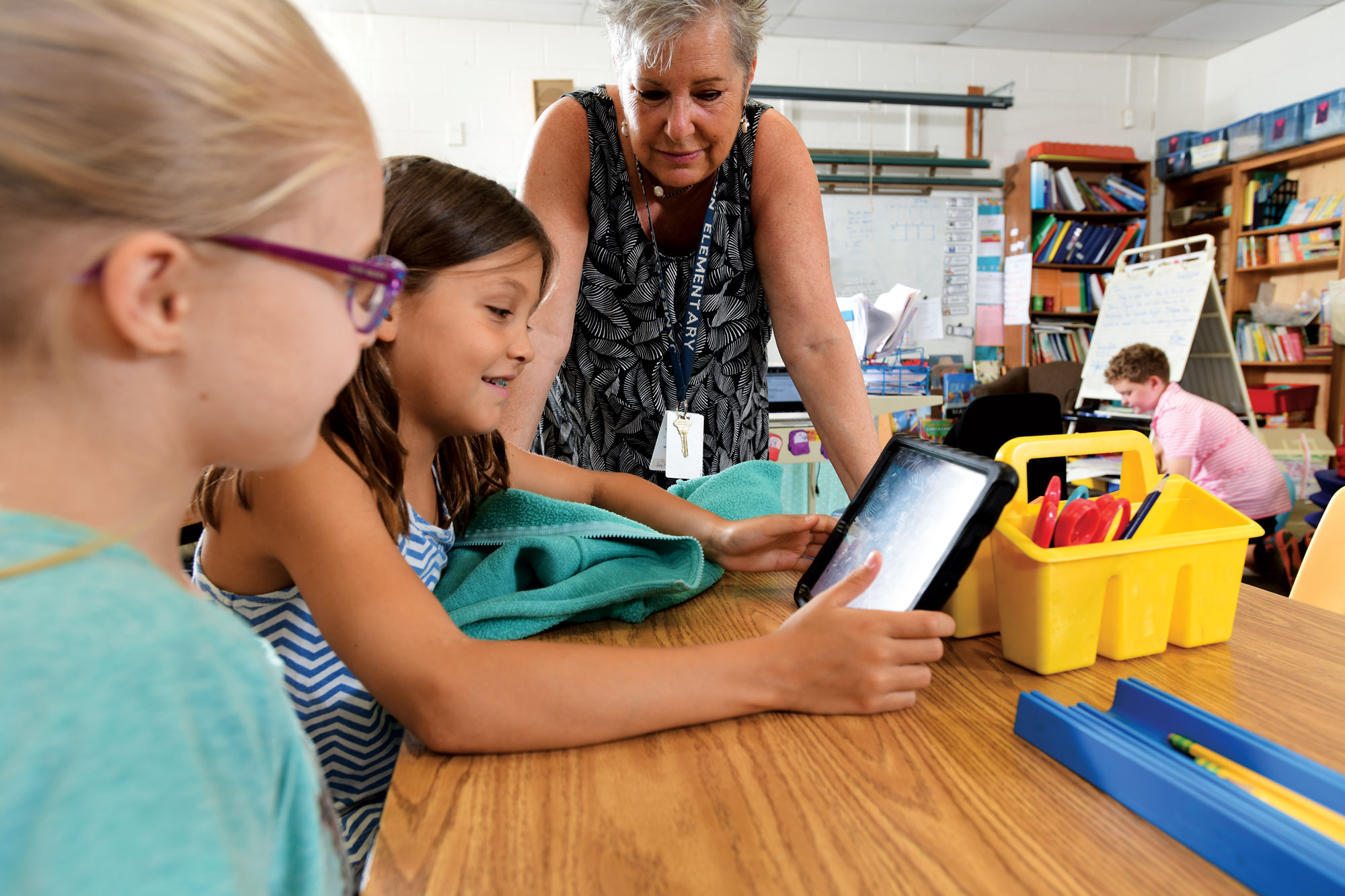 Ortiz is now a foot soldier in APS’ effort to transform the traditional classroom (think lectures and paper worksheets) to a more “personalized learning” environment in which each student’s academic needs are routinely assessed and teaching approaches are adjusted accordingly. In this new world, APS says, students help to direct their own learning, and digital devices bolster that effort. Since the pilot program went mainstream in 2014, elementary and middle school students in select grades have received tablets. High-schoolers have been issued laptops.

Arlington is hardly an outlier in this wireless new world. Similar initiatives have been launched in public and private schools in Falls Church City, Fairfax County and countless other school districts nationwide.

Last fall, the Virginia Board of Education voted to replace its “computer technology” standards of learning with “computer science” standards of learning—a shift that signified more than semantics. While the previous standards emphasized technology literacy, the new rubric has an expanded focus that includes systems design, networking, cybersecurity, data analysis, algorithmic processes, programming and the effects of computing. The new standards require children as young as kindergartners to be taught about social media and the importance of protecting personal information online.

“The world is every day more connected, and there’s no better time to make a difference [in how kids learn],” says Emily Liebtag, director of advocacy for Getting Smart, a Seattle-based learning design firm that has partnered with education giants such as the Bill & Melinda Gates Foundation, McGraw-Hill Education and the Barbara Bush Foundation for Family Literacy.

“It’s a real equity issue if we’re not giving students devices, not giving them access to unleash their full potential,” Liebtag says. “Someone could be the next Steve Jobs—but if we wait until after school to put technology in their hands, that’s a real travesty.”

Public schools in the U.S. now provide at least one computer for every five students and collectively spend more than $3 billion a year on digital content, according to a 2016 “Technology in Education” report published in Education Week.

After the launch of President Barack Obama’s ConnectED initiative (a push to equip 99 percent of America’s public schools with broadband Internet access), the percentage of school districts with high-speed broadband increased from 30 percent in 2013 to 88 percent in 2016.

But connecting the dots between classroom technology and academic gains has proved difficult. “There remains limited evidence to show that technology and online learning are improving learning outcomes for most students,” wrote Education Week’s Benjamin Herold.

Seven years into its strategic plan to equip every student in grades 2-12 with a personal digital learning device, APS says it will conduct a comprehensive evaluation of the program during the 2018-19 school year. But some parents—many of whom grew up using floppy disks and scouring library books for research—aren’t waiting for the report; they’re already raising concerns.

Kelly Alexis, administrator of a local Facebook group called Arlington Education Matters, says she’s so far been troubled by the absence of measurable outcomes for digital device use. “What are kids not doing that they were doing before?” she asks. “I’m not a Luddite, but there’s been a lack of consistency and a lack of explanation to parents about what [the devices] are being used for countywide.”

Alexis says she pays $70 an hour for a handwriting and reading tutor for her fifth-grade son. She worries that APS is deemphasizing life skills such as penmanship and essay-writing.

Other parents have raised red flags about how devices are being used outside the classroom. This spring, Gunston Middle School parent Erin Gaston-Owen launched a successful Change.org petition to adopt and enforce countywide policies keeping iPads out of middle school cafeterias. She says she was moved to take action after hearing that some students were watching horror movies on their school-issued tablets during lunch.
“Our concern was that there wasn’t sufficient monitoring,” she says. “This should not be the opiate of the masses in the lunchroom.”

APS’ “acceptable use policy” for student devices expressly prohibits activities such as downloading unauthorized software, plagiarizing online content, cyberbullying and destroying or compromising data by creating or spreading viruses. It also outlines rules for the care and storage of devices, and offers guidelines for parents to follow when the devices are at home.

But in surveys and community workshops, some parents still seem uneasy with the idea that their kids have school-issued devices at all.

“I say instead of disciplining our kids for doing what comes naturally to them on iPads, don’t give them the opportunity to mess up,” said one survey respondent. “Keep their childhoods simple and let them learn technology at home or when they get a little older at school.”

“Often teachers rely on iPads to keep kids busy while they are working with other kids,” another parent remarked, “and kids on the iPads are unsupervised and playing games. I have heard this from my kids and it is very common.”

Digital overload is yet another widespread concern. “Our children are becoming addicted to the screens at early ages,” wrote another parent. “My seven-year-old received an iPad from Arlington, and over the two years he has had it, he spends more and more time on it, choosing it over playing outside, making neighborhood friends, building things in our basement. I have tried to monitor and limit time, but it becomes a problem between us. I did not want my child to have an iPad; I never would have bought him one.”