The Cicada World, According to Oxana Ware

Move over, Peeps dioramas. The cicadas are here, and they’re ready for their close-up with this hilarious Arlington photographer. 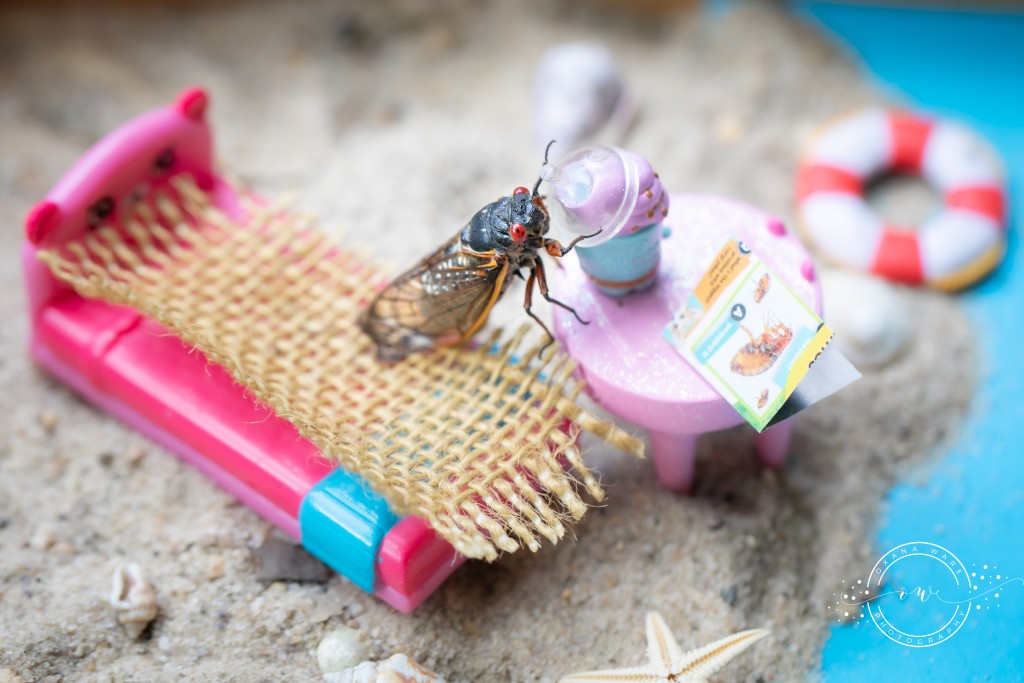 Cicadas at the beach. Photo by Oxana Ware.

As a portrait photographer specializing in newborns, Oxana Ware likes to build her own sets to create magical worlds. She knits ethereal blankets and bonnets, crafts headbands from scratch, and hand-braids baskets of the softest yarn to make swaddled babies look snug as a bug in a rug.

But after a year of social distancing, the Arlington photographer and mom of three is feeling a little punchy. So she’s turned her camera lens on actual bugs. You can guess the ones we’re talking about. 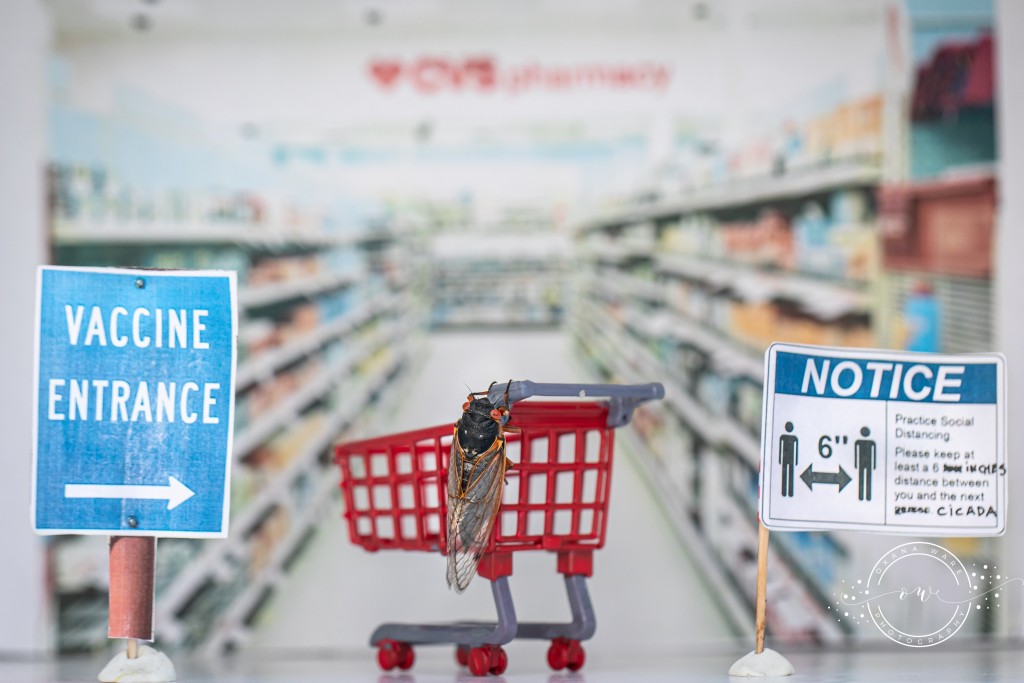 A trip to CVS to get vaccinated. “The line was not too bad,” Ware says.

“I have always loved insects,” says Ware, who lives with her family in Tara Leeway Heights, “from ladybugs and ants to the spiders that are iridescent colors with lots of crazy eyes.”

Though her Instagram feed does include some gorgeous shots of local wildlife in their natural habitats, the subjects in her X Brood Adventures! series aren’t exactly doing normal bug things. They’re getting vaccinated, partying hard, traveling the world and—in the case of one “Lil’ X”—joining the ranks of social media influencers making “CikTok” videos.

Because frankly we all just need to laugh right now.

In building the sets for her vignettes, Ware has borrowed a few toys from her kids (they are 2, 4 and 5), resurrected old photos to use as backdrops and repurposed a few household objects. The global props for her “Around the World in One Rainy Day” study (from the Eiffel Tower to Easter Island to Angkor Wat) are airport tchotchkes courtesy of her husband, Jon, an attorney whose wanderlust has taken him to dozens of places around the world. 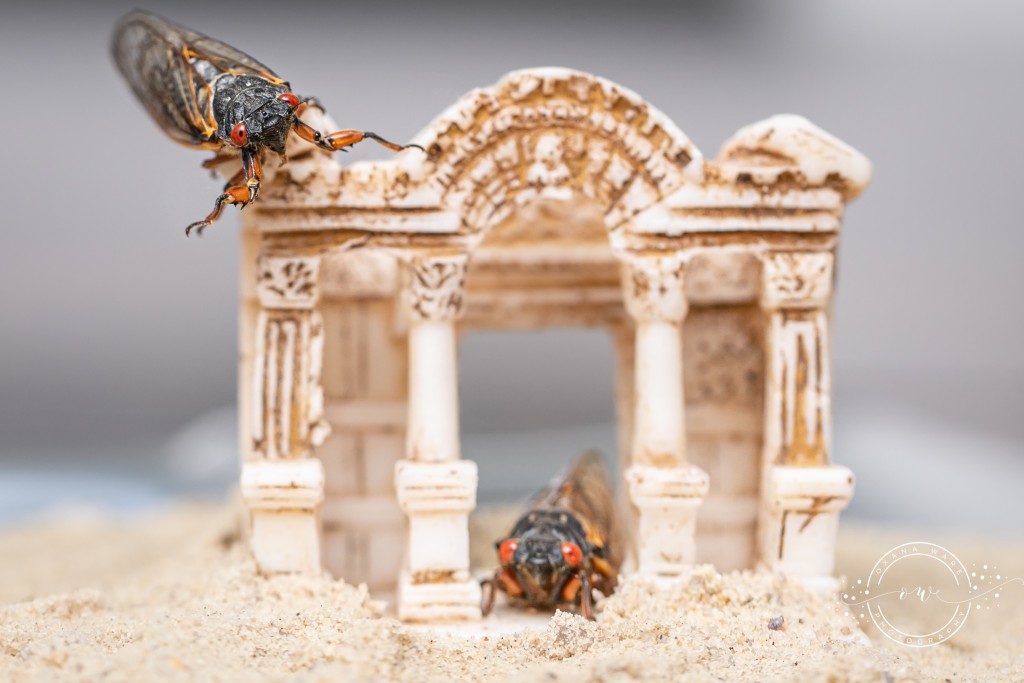 An homage to antiquity. Photo by Oxana Ware.

She’s also borrowed some cicada-size furnishings, including tiny patio chairs and a dollhouse, from a friend who made miniature models during the pandemic to alleviate stress and ennui.

Cicada at the beach. Photo by Oxana Ware.

Ware concedes that cicadas don’t make the best models. “It’s been a bit of trial and error,” says the photographer, who previously spent seven years in international development with The World Bank (and still does some contract work in that field). “How do I portray a cicada on the beach? I was thinking it would be nice if it relaxed on a chaise lounge and read a newspaper, but cicadas hate being on their backs. So instead it’s drinking a milkshake.” 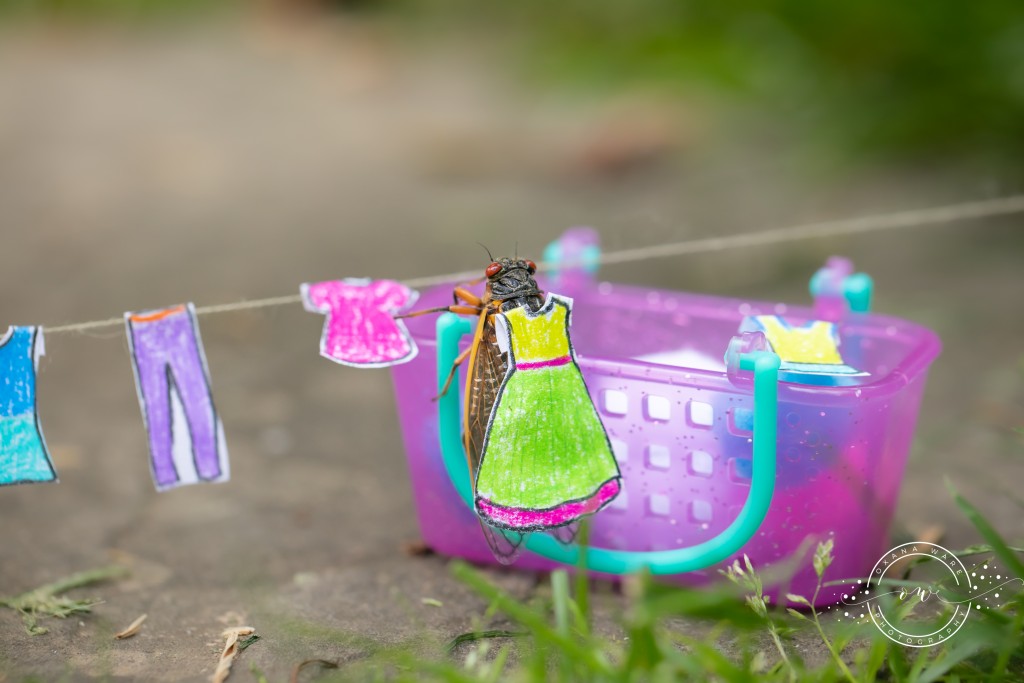 Realizing how much the ephemeral critters like to cling to things, she shifted her crafting to “clingable” objects like miniature clotheslines. And circus apparatus. But now that they’ve fully emerged from their exoskeletons, she says the insects are less sluggish and more apt to fly away. “And they don’t like wearing dresses.” 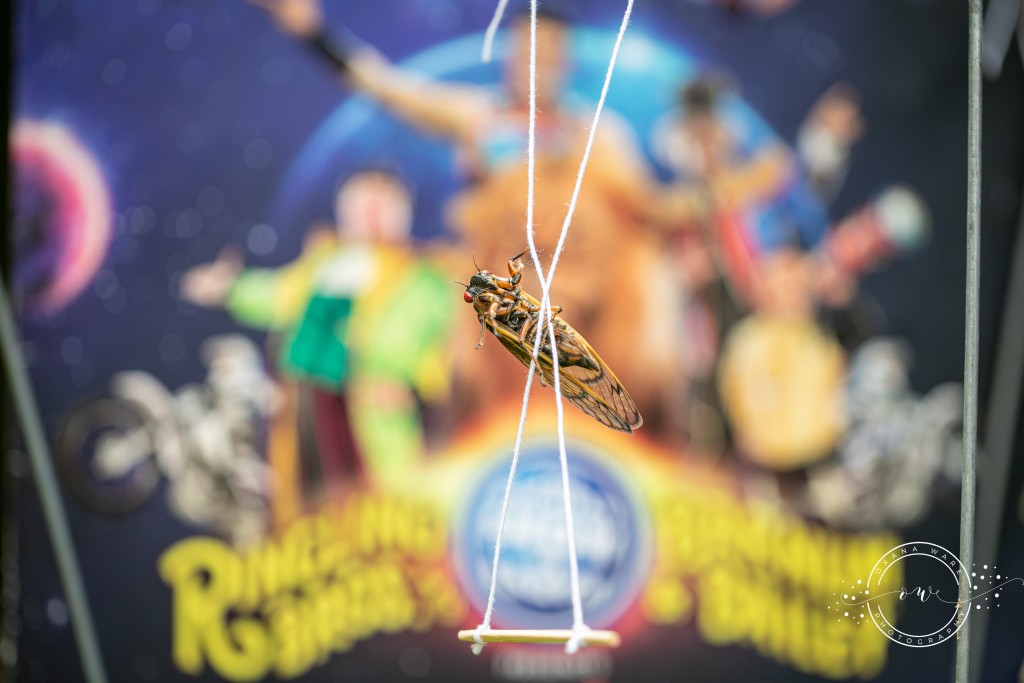 A cicada on the flying trapeze. Photo by Oxana Ware.

Some folks may be grossed out by the re-emergence of the red-eyed bugs, but Ware thinks they’re cool.

“People are freaking out: The cicadas are coming. They’re going to kill our trees, scare our dogs, make a deafening noise,” she laughs. “I want them to feel welcome. I mean c’mon. They’ve been underground for 17 years.” 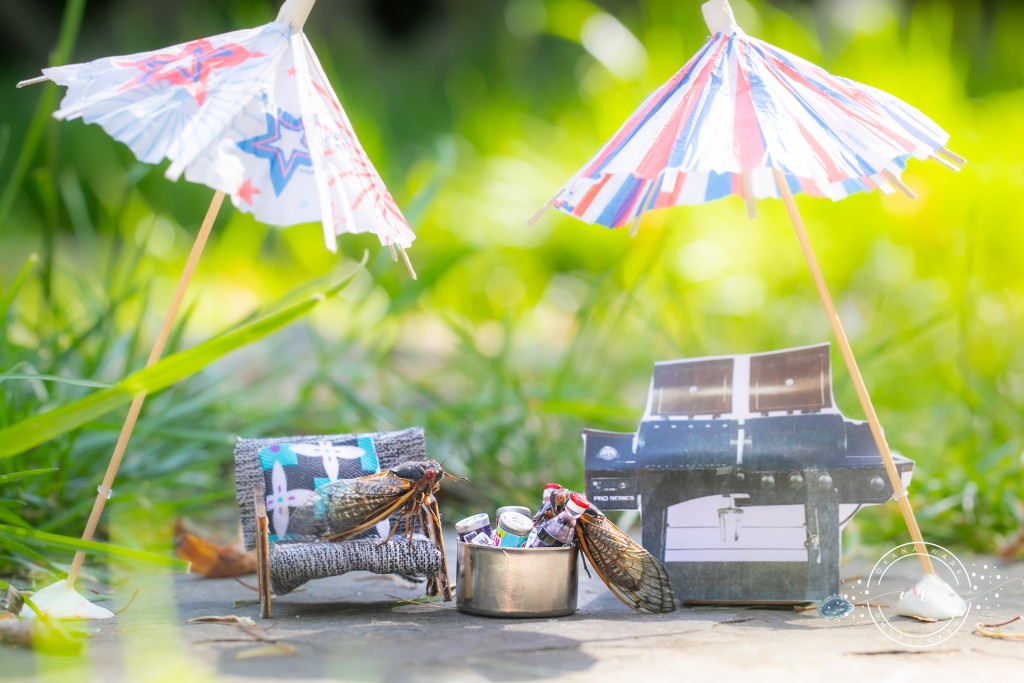 Which of the vignettes is her favorite so far? “Probably the July 4th one,” she says. “The umbrellas and flag are from Ayers Hardware in Westover. I spent way too much time finding the perfect grill [for a cardboard cutout] and they seriously hated it. They would just crawl away or knock it over. Thank god I didn’t waste time cutting out a spatula.”

They were, however, all in on the miniature ice bucket with its miniature beverages. “This went on for a while and most of them were goners before the fireworks,” Ware says. But there was one patriot who managed to stay up for the finale. 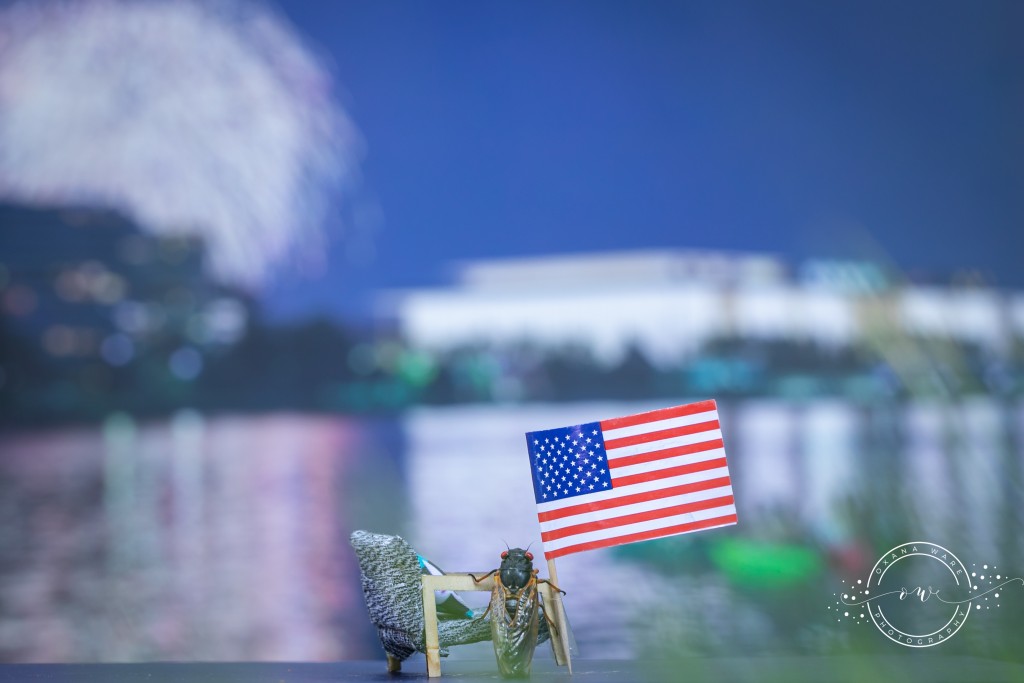