20 Great Trivia Nights In and Around Arlington

Grab a pencil and a Bavarian pretzel at these rollicking eateries that are perking up weeknights. 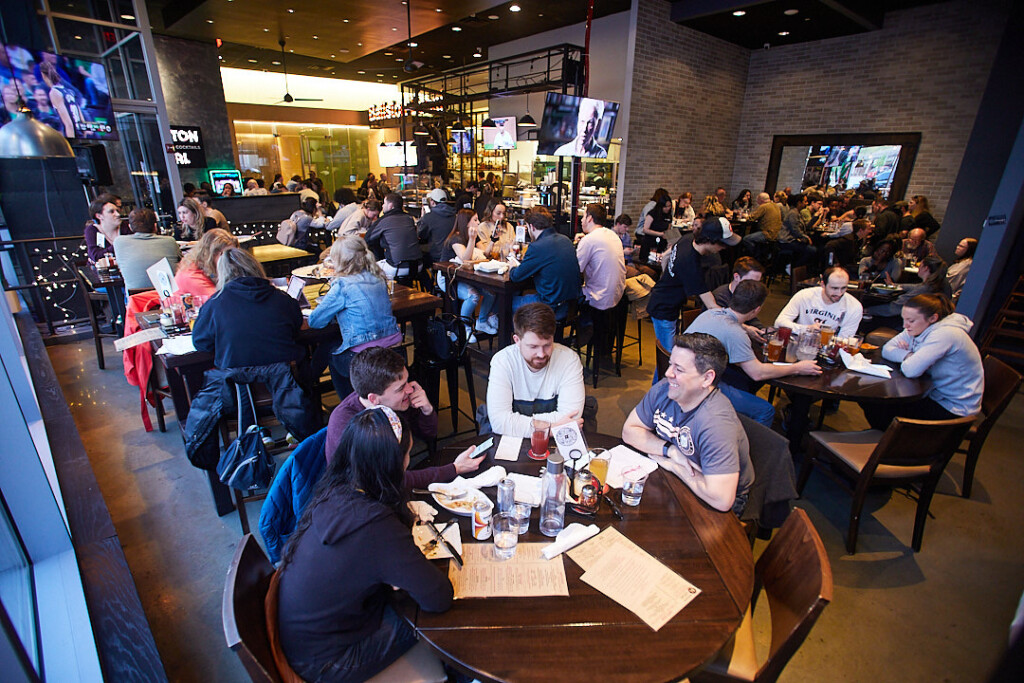 Snag a table early at Ballston Local, one of dozens of local bars and eateries hosting trivia nights in and around Arlington. It fills up fast. (Photo courtesy of Ballston Local)

Weeknights. Just what are you supposed to do with them? Staying in night after night is a drag, but going on an all-night pub crawl may not be the smartest idea when you’ve got to report back to your laptop the next morning. Enter trivia night, an evening of revelry and intellect that wraps up by 9 or 10 p.m. With questions on everything from ancient history to the latest in pop culture, these games are sure to challenge even those with the highest of GPAs. Test your mettle at these competitions around town:

Voted Best Trivia Night by Arlington Magazine readers this year, this Ballston hub hosts two nights of mind-bending questions each week, on Mondays and Wednesdays. Be sure to grab a table early before the place fills up, and dig into the New York-style pizza or the Chesapeake poutine while you’re noodling on an answer. // 900 N. Glebe Road, Arlington (Ballston)

The “come-as-you-are bar” on Langston Boulevard hosts trivia bouts each Monday, accompanied by $3 off all sandwiches (lookin’ at you, chili cheese half-smoke dog). The restaurant sports more than a dozen beers on tap and plenty of cocktails, including one that may be ideal for celebrating a win or forgetting a loss: the Cowboy Cider, made with hot cider and Jack Daniels apple or fireball whiskey. // 4792 Langston Blvd., Arlington

Head to this longtime watering hole on Crystal City’s 23rd Street restaurant row for Bavarian pretzels, crab cakes and a workout for your brain. Get there for happy hour if you can, which runs 3-6:30 p.m., and take advantage of select $4 beers, $4 rail drinks and $7 appetizers. // 529 23rd St. S., Arlington (Crystal City)

This Alexandria spot can make just about any pizza you want, with more than two dozen specialty pies on the menu. Gather round the trivia table to share an Herbs in the Burbs (alfredo, chicken, bacon, garlic, basil, oregano) or a Bulldog (sausage, banana peppers, roasted red peppers, red onions), and wash it down with something tasty from the beverage list of craft beers, wine, cocktails and zero-proof drinks. // 2218 Mt. Vernon Ave., Alexandria (Del Ray) 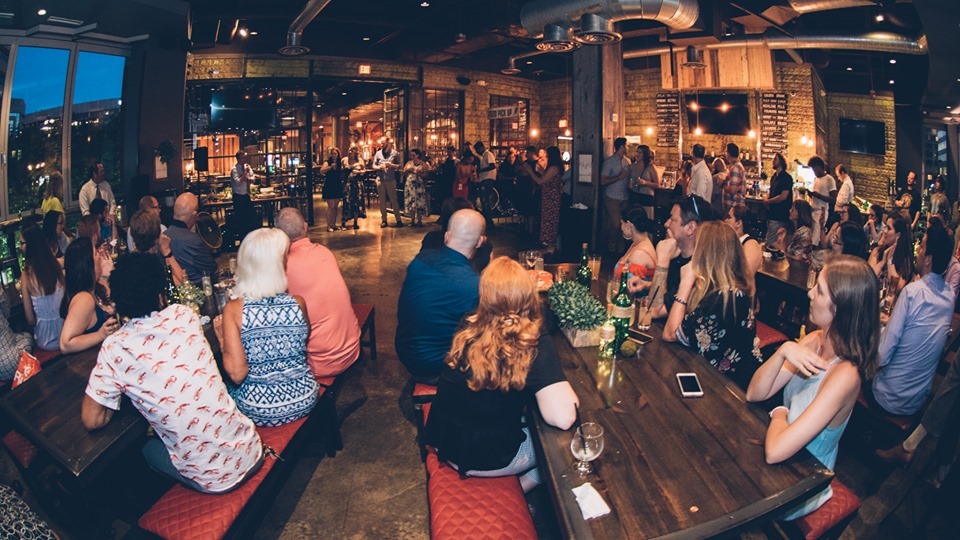 Find some 40 beers on tap at Highline RxR in National Landing. (Photo courtesy of Highline RxR)

They’ve got parmesan truffle fries, Buffalo chicken sliders and 40 beers on tap to keep your mind lubricated as you ponder questions about sports records and world architecture. Highline RxR, a nearly 8-year-old nightspot in National Landing, hosts trivia each Monday, as well the Capital City Showcase on the last Saturday of each month. The triathlon-esque entertainment event blends trivia with karaoke and a stand-up comedy show. // 2010 Crystal Drive, Arlington

This destination for “pints and pizza” features $5 rotating beer specials during the two-hour game. Not a beer fan? No problem—they’ve got draft cocktails, including a spicy mango-rita. And if you want to double-up on the brainteasing fun, they also host trivia nights Tuesdays. // 4001 Fairfax Drive, Arlington

This Courthouse eatery is home to some 20 screens to watch the big game and regularly hosts live music. But come Mondays it also welcomes in trivia lovers to play a few rounds with orders of brisket egg rolls, flash-fried oysters and cocktails like the Chocolate Old Fashioned.  // 1345 N. Courthouse Road, Arlington (Courthouse) 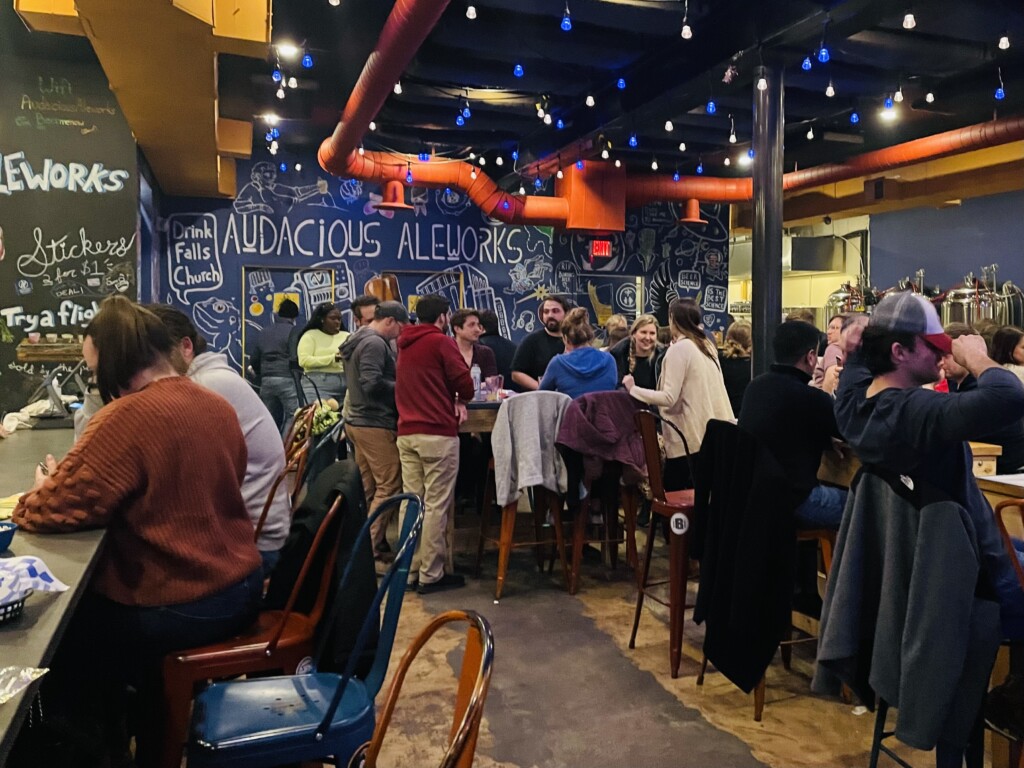 Test your brain while sinking your teeth into an “epic” grilled cheese at Audacious Aleworks in Falls Church. (Photo by Eliza Tebo)

Find 20 craft beers on tap at this Falls Church brewery, known for cheekily named brews such as There’s Something About Mango and Highway to Helles. A customizable “epic” grilled cheese (smoked gouda, havarti, pesto, sauerkraut, buffalo sauce…why not?) is a must-order, but they’ve also got brats and bottomless popcorn to fuel your brain. // 110 E. Fairfax St., Falls Church City

How much do you know about opera composers? Or Superman? Or college football? This board game destination in Clarendon doles out prizes for the top three finishers each trivia night, and promotes themed bonus questions in its Instagram feed. While there, sip on house brews  and dive into loaded nachos or veggie flatbread. // 925 N. Garfield St., Arlington (Clarendon) 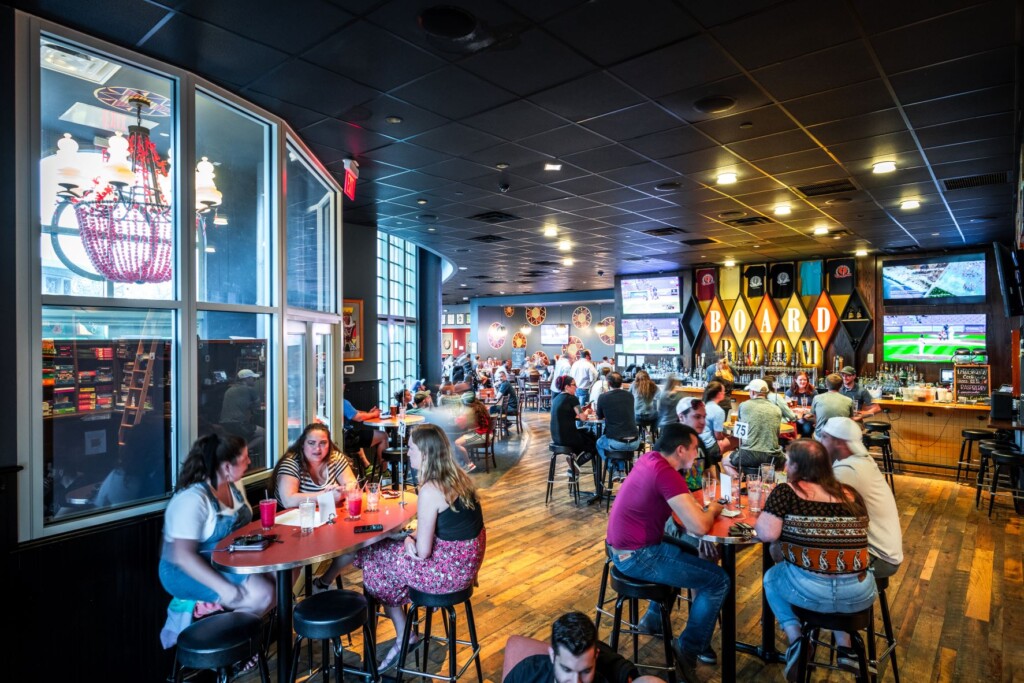 Made for serious socializing, this 11,000-square-foot Shirlington sports pub hosts trivia contests on Taco Tuesday, when you can grab taco trays for $10, as well as drink specials. Happy hour runs 3-6 p.m., featuring $10 pitchers and $10 wings if you want to start filling up before the game. // 2766 S. Arlington Mill Drive, Arlington (Shirlington)

Hop over to this nearly 15-year-old Ballston bar, home to more than 30 TV screens, and show off what you know. First Down also boasts some 40 flavors of wings, from teriyaki madness to honey-lime sriracha, and a brownie sundae if you need some sugary sustenance to power yourself to victory. // 4213 Fairfax Drive, Arlington (Ballston)

Since 2011, Samuel Beckett’s has entertained Shirlington restaurant-goers with live music, rugby-watching and brunch. On Tuesdays, the tavern hosts trivia contests, accompanied by food and drink specials and prizes for the brainest of the bunch. Catch happy hour from 2-6 p.m. for additional discounts. // 2800 S. Randolph St., Suite 110, Arlington (Shirlington) 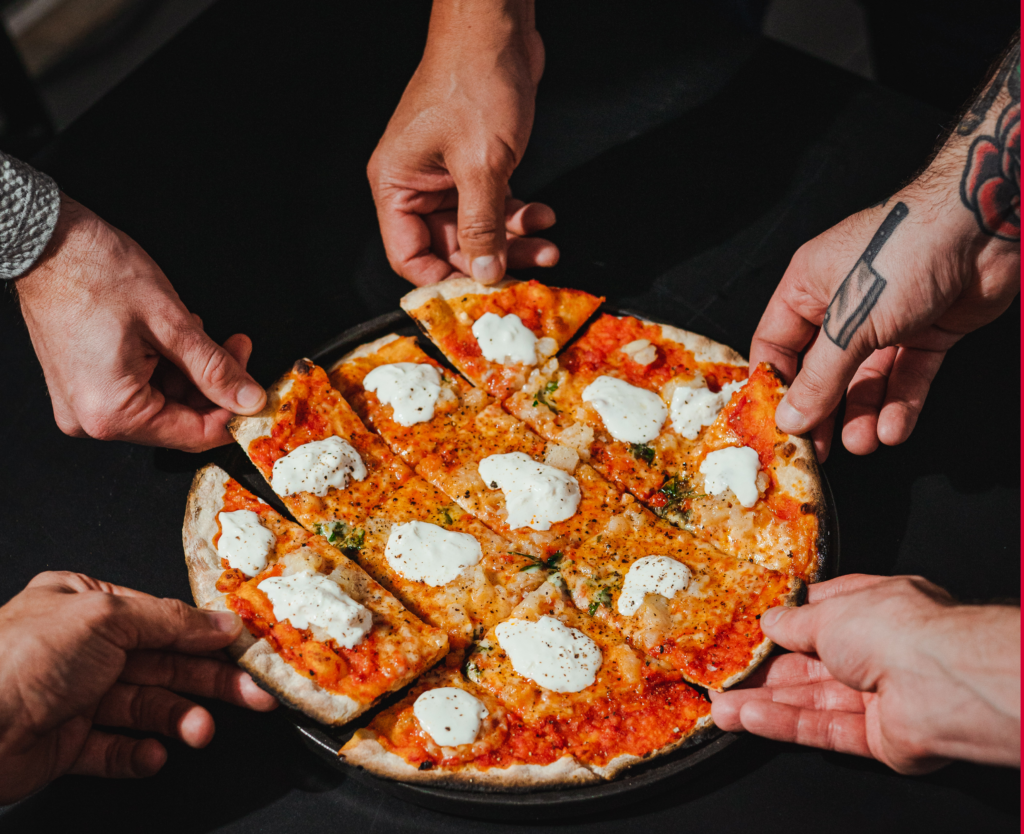 Need a mid-week pick-me-up? Park yourself at this beer garden, where the nachos are crafted with house-made potato chips and two dozen beers make the tap list. Happy hour runs 3-6 p.m., with $2 off draft beer, cocktails and wine, as well as food specials. And when things warm up, take advantage of the dog-friendly patio. (Fido might know a few of the answers as well.) // 2300 Clarendon Blvd., Arlington (Courthouse)

For more than 15 years, O’Sullivan’s has been a Clarendon staple, hosting live tunes, comedy nights, trivia and a devoted cadres of regulars. Settle in on Wednesdays with a group of friends and an order of Irish potato cakes or crab-and-corn chowder. The barkeeps pour an assortment of Irish mixed drafts, including the Black velvet (Guiness and Magners). Did we mention their 130-plus whiskeys? // 3207 Washington Blvd., Arlington (Clarendon)

Make a night of it at this roughly 5-year-old Falls Church microbrewery sporting more than a dozen brews on its tap list. Players can band together with teammates or play alone if they’re feeling particularly quick-witted. Hungry? Grab some tacos from the on-site El Tio Tex Mex Grill stand. // 2822 Fallfax Drive, Falls Church (Merrifield) 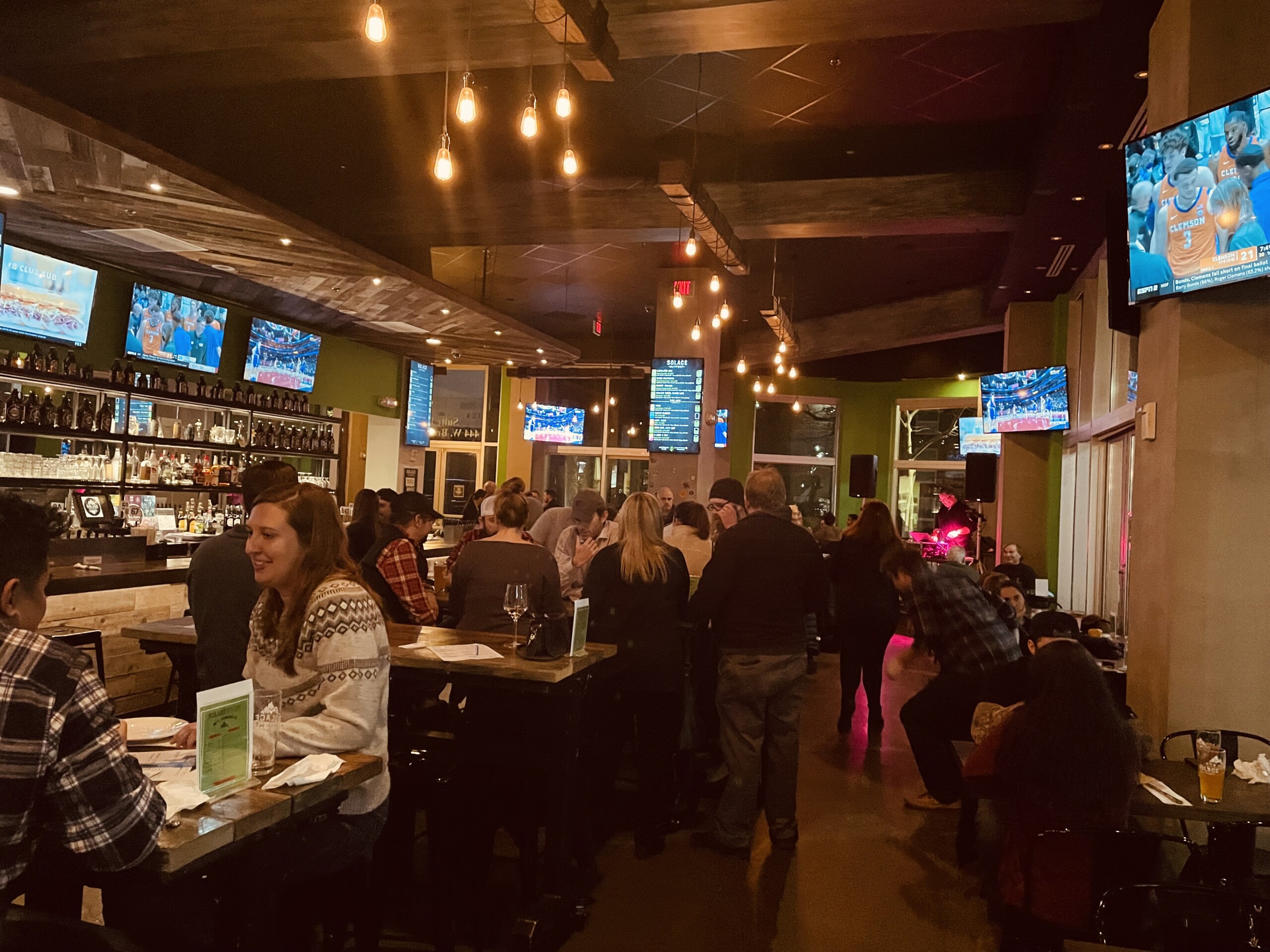 Enjoy trivia on Tuesdays and Thursdays at Solace Outpost. (Photo by Eliza Tebo)

Procure some nibbles from an on-site food truck and a pour of the National Landing IPA or That’s My Horse porter at this Shirlington brewery, known for its annual food and culture fest. Leashed dogs are welcome. // 2709 S. Oakland St., Arlington (Shirlington)

Can’t think straight when you’re hungry? Fix those cravings with an order of tot-chos, fried Oreos and one of more than a dozen craft brews on tap at this Falls Church brewery, tucked inside the former home of Mad Fox. Happy hour runs 4-6 p.m., and if you can’t make it Thursdays, they’ve also got trivia Tuesday nights. (Or heck, go both nights if you just can’t get enough.) // 444 W. Broad St., Falls Church City 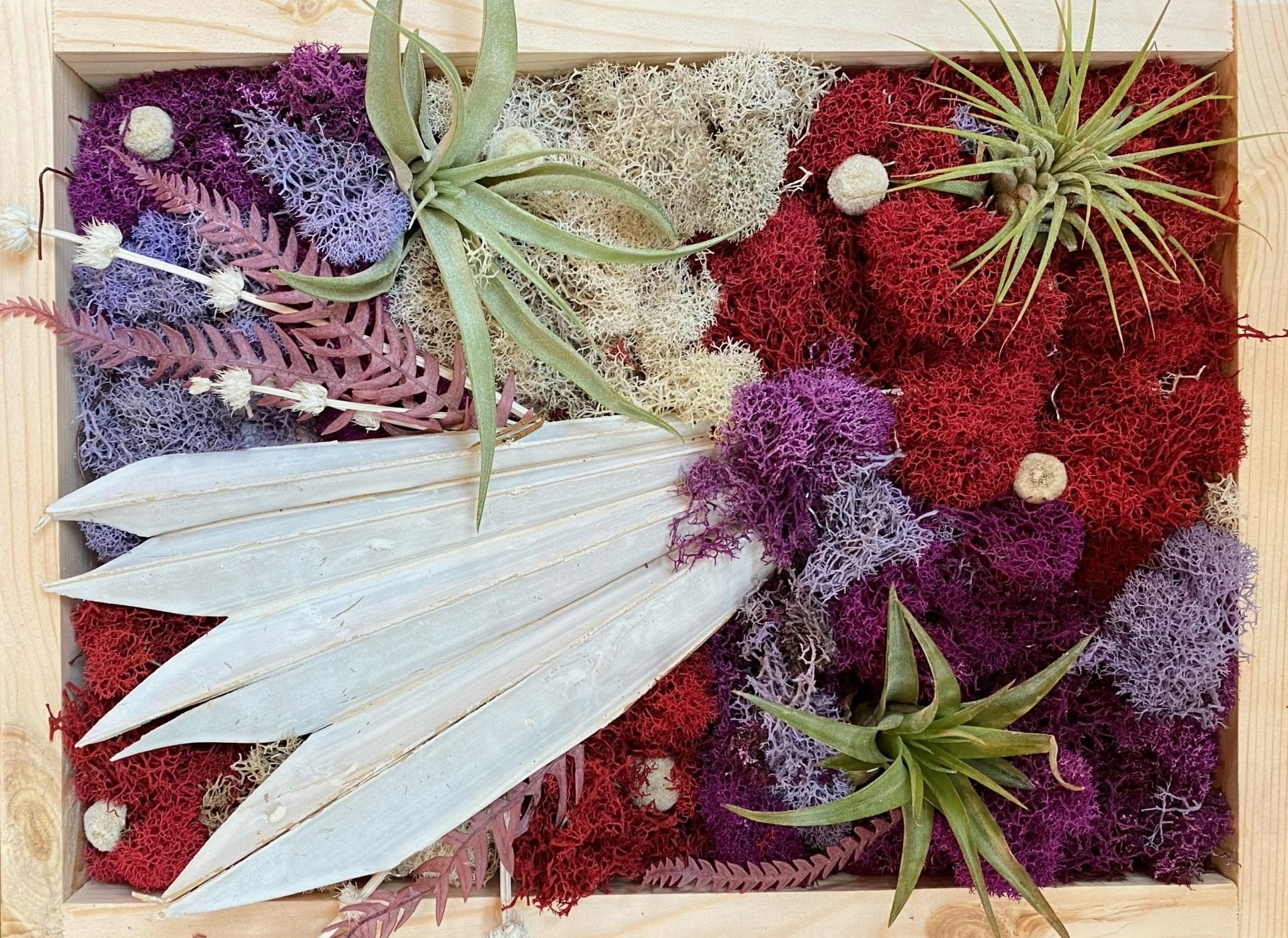 Looking for a New Passion Project in 2023? Try These 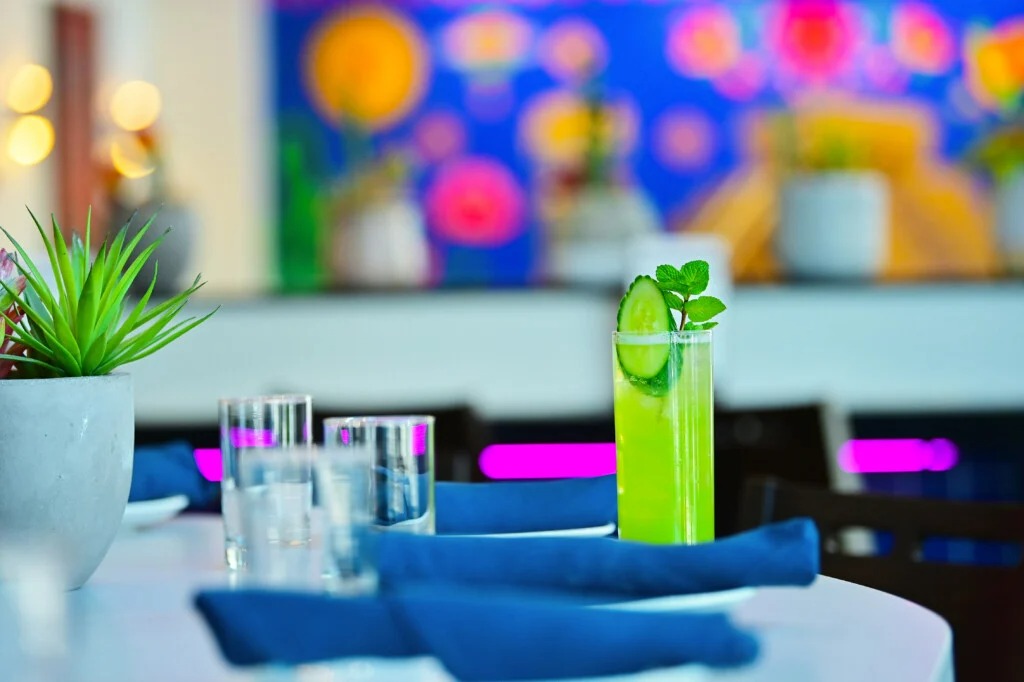 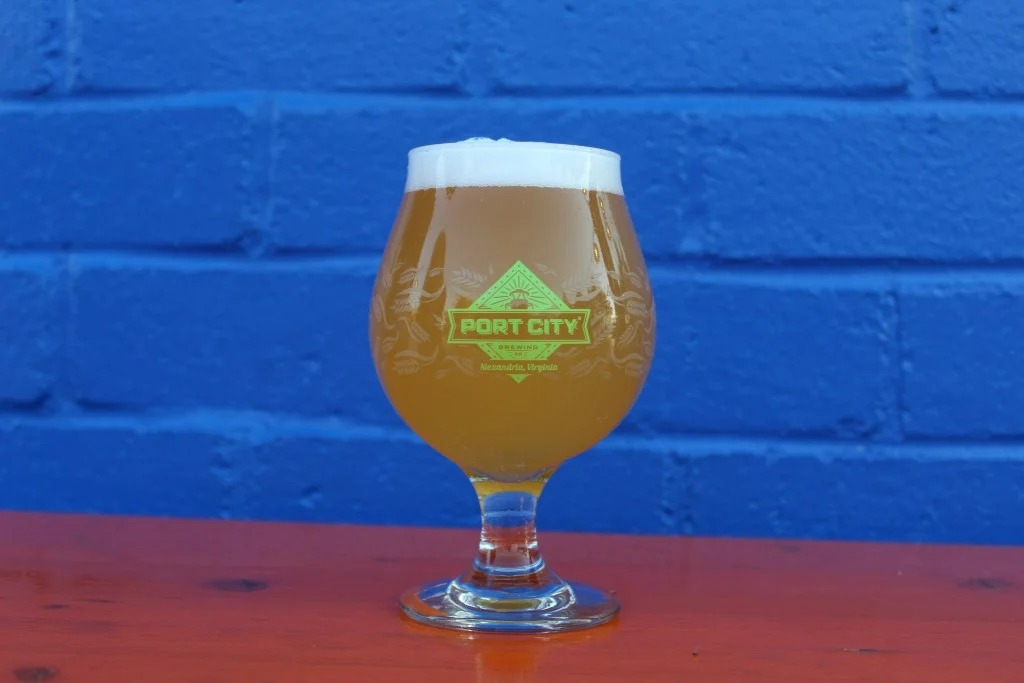