Shazia Mirza says no topic is off-limits when it comes to comedy. 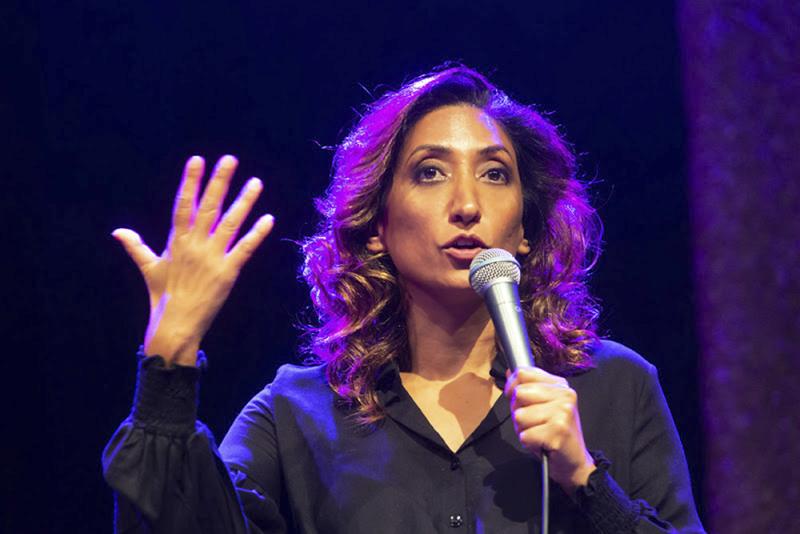 The British comedian and writer—whose mother and father were born in India and Pakistan, respectively—has done stand-up for about 13 years, including plenty of jokes about her cultural background. The 36-year-old has gained notoriety in recent years for being on a relatively short roster of female Muslim comedians, the brains behind controversial show The Kardashians Made Me Do It (more below) and appearing on U.K. Survivor-like reality show Celebrity Island with Bear Grylls.

Tonight and tomorrow, Mirza joins fellow comedians Julia Hladkowicz (Canada) and Joseph Opio (Uganda) as part of the DC International Comedy Showcase. The series presents two slates of international comedians, with stand-up sets at Arlington Cinema & Drafthouse and D.C.’s Drafthouse Comedy May 16-18. (Mirza appears on the 16th and 17th. A second trio of comedians performs at the Saturday, May 18th show.)

We caught up with Mirza to chat about her background in comedy—including how she found her calling by teaching science to disinterested East London teens.

How did you get into stand-up comedy?

It was an accident, really, because it wasn’t really a possibility for someone like me. When I was growing up, and I watched comedy on TV, it was white men that did it. I never thought that would be something for me because nobody who looked like me did it.  I knew my plan for my life because it was told to me when I was growing up: “This is what you do. You be respectable and you get married to a nice doctor, and then you will have some children who will also be doctors. And you’ll be a very nice wife, and you’ll have a very nice house.” And so I did that; I went to university, I did a degree in biochemistry, I became a teacher. It was never anything that I ever wanted to do. I taught in some very rough schools. I didn’t realize it at the time, but I was doing stand-up. I was standing in front of this class every day. None of us wanted to be there. And so to make all of our lives easier, we just entertained each other. I didn’t know I wanted to do comedy, but I wanted to be on stage somewhere, doing something else.

Did you get married and have children?

No, I’ve been on the run ever since. I just avoided everything that I was supposed to do. I tried to live my life how I wanted to. That comes at a price, obviously. If you’re a Muslim woman and you want to be a stand-up comedian, that’s not going to come for free. You pay a price for that.

Why is it such an aberration to become a female stand-up comedian if you’re Muslim?

Where to begin? Women are in fashion now—that’s great. This has been a long time coming. But it’s only now, in the past one or two years, that women’s stories are being heard and people are actually listening. When I started, I was the only Muslim woman and the only Asian woman in Britain doing stand-up. I was always on a bill with white men. From my background, women just don’t do that kind of thing. Muslim women still don’t really have a voice. We have one person, Malala, who got shot in the head by the Taliban for her to have a voice.

Do fans approach you and say you’re paving a way for them?

I have so many letters and emails, even some from Muslim men. I had an email recently from a girl who said, “I’ve seen you on TV—you really made me laugh. I’m going to have an arranged marriage. I don’t want to get married to him, but I’ve agreed to it because I don’t want to bring shame on the family. You haven’t been able to help me with my situation, but you must carry on because you might be able to help another girl in her situation.”And I just thought, I’m a comedian. I just tell jokes—I haven’t saved anybody. I can’t even save myself. But I thought about it for a long time afterwards. The reason now is the time for women is because you need to see people who look like you reflected back at you. So you can say, “OK, if they can do that, and say that, and live that life, then I can do that too.” It doesn’t necessarily mean that loads of Muslim women are going to become stand-up comedians. It just means that, “Oh I can live another life other than the one I was born into.”

Tell us about The Kardashians Made Me Do It.

I wrote this show a couple of years ago. It was based on political correctness, people being offended, representation—like what people expect me to be and talk about all the time on stage. It was also a bit about how the three girls from Bethnal Green in East London went to join ISIS and why I think they went. I did about 110 nights of this show all over England and Europe and abroad. It just became really big because what I said in the show was a slightly different viewpoint from what people had read about [their story].

As a stand-up comedian, you’ve talked about everything from suicide bombers to STDs. Are there any topics that are just going too far?

I talk about whatever I talk about in my stand-up. I never think of it as controversial; I just think of it as the truth. Comedy is about the truth, whether it’s your truth, your life, how you see things. It’s your honest, real thoughts and feelings. I never think, “Oh, this is going to be controversial,” or “People are not going to like this.” I never think of the audience. I don’t think you can do a true piece of work if you think of the audience. I never know what the outcome is going to be. As a comedian, you can talk about anything, absolutely anything. As long as it’s funny and it’s truthful, it will always work.