Arlington’s favorite redhead has faced a slew of medical setbacks that nearly ended her career. Her response? Just dance. 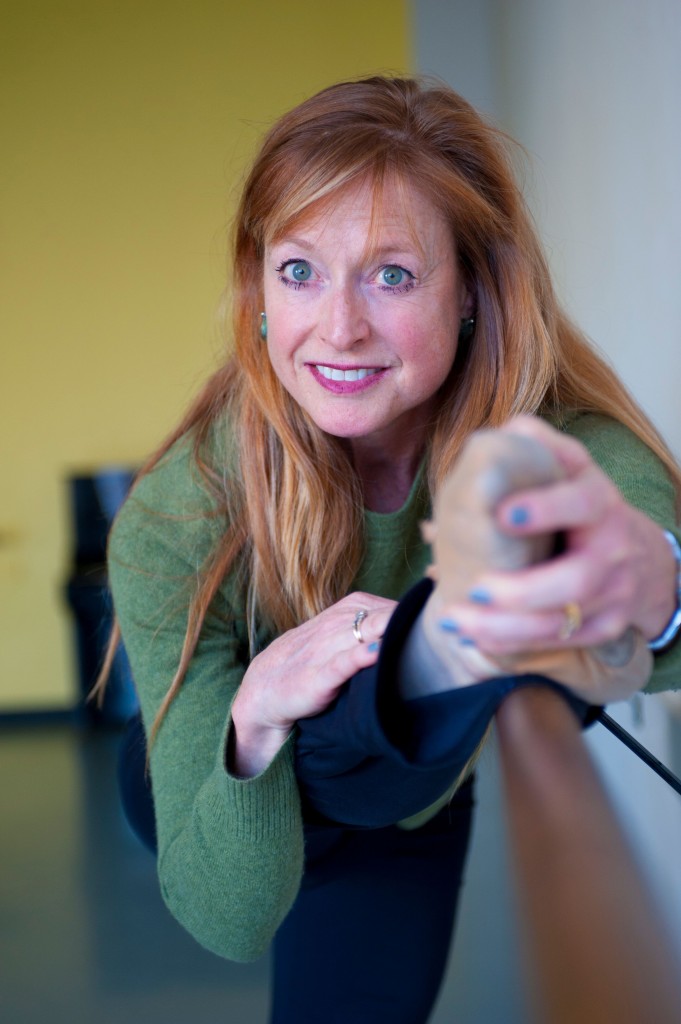 Lucy Bowen McCauley’s aqua eyes are intent on seven dancers as they raise their arms high, their feet swirling across the shiny wood floor. The music in the background flows from salsa to Benny Goodman as she directs them in a choreographic exercise. Each person says his or her name and does a “signature move” that all then imitate, in sequence.

“Soon you’ll be ready for your bikinis!” she jokes, as they concentrate on remembering each maneuver.

But these dancers aren’t professionals in the Arlington-based repertory company that Bowen McCauley heads as artistic director. They are adults with Parkinson’s disease, eager participants in the free class her company offers six times a week. And they’re moving to the music while seated in chairs. 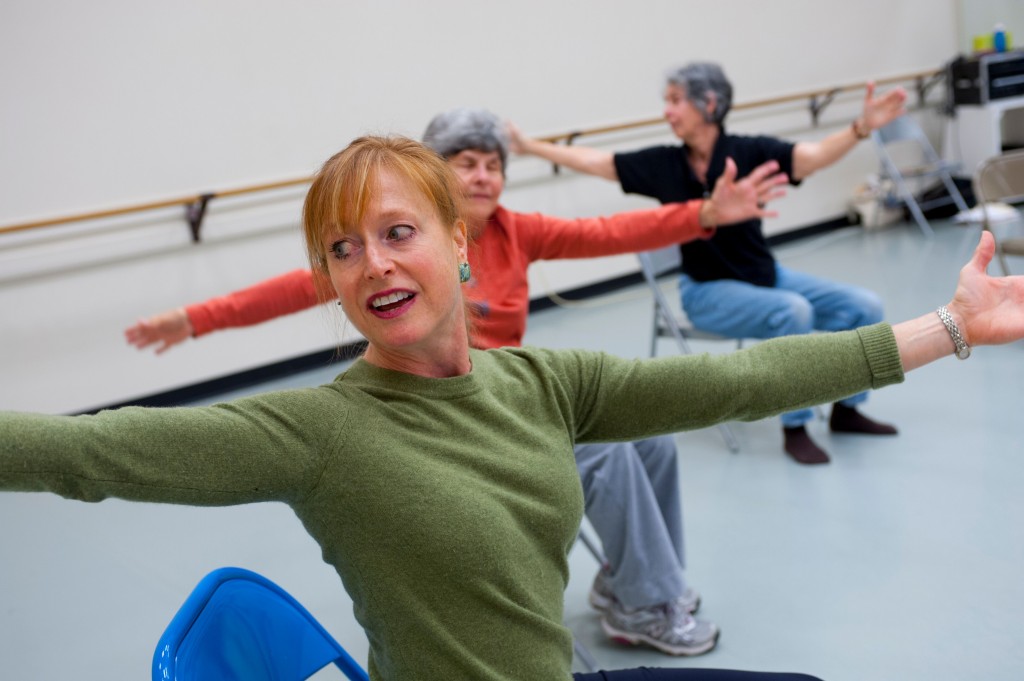 Teaching a class for people with Parkinson’s disease. Photo by Michael Ventura.

Dance—the one-time ballerina and self-described “rocker” asserts with a broad smile—is for everyone. “There is so much joy in dance,” she says. “It’s what I fell in love with so long ago.”

Although it wasn’t exactly love at first plié for the young dancer. Bowen McCauley first took up ballet at age 7, during her “tomboy” phase, but didn’t care for the pink tights and strict instructor. She quit after two years.

As a tween, she gave the discipline another try, studying first at Indianapolis’ Jordan School of Music and Dance, and then at the Interlochen Center for the Arts near Traverse City, Mich. By the time she turned 18, she was an apprentice with New York City’s acclaimed Joffrey Ballet, training as an extra for a full production of Petrushka on Broadway, and later, at Lincoln Center.

“It was a really special time,” she says, recalling the awe she felt while rehearsing onstage with greats such as Rudolf Nureyev and the renowned ballet company’s namesake, Robert Joffrey. 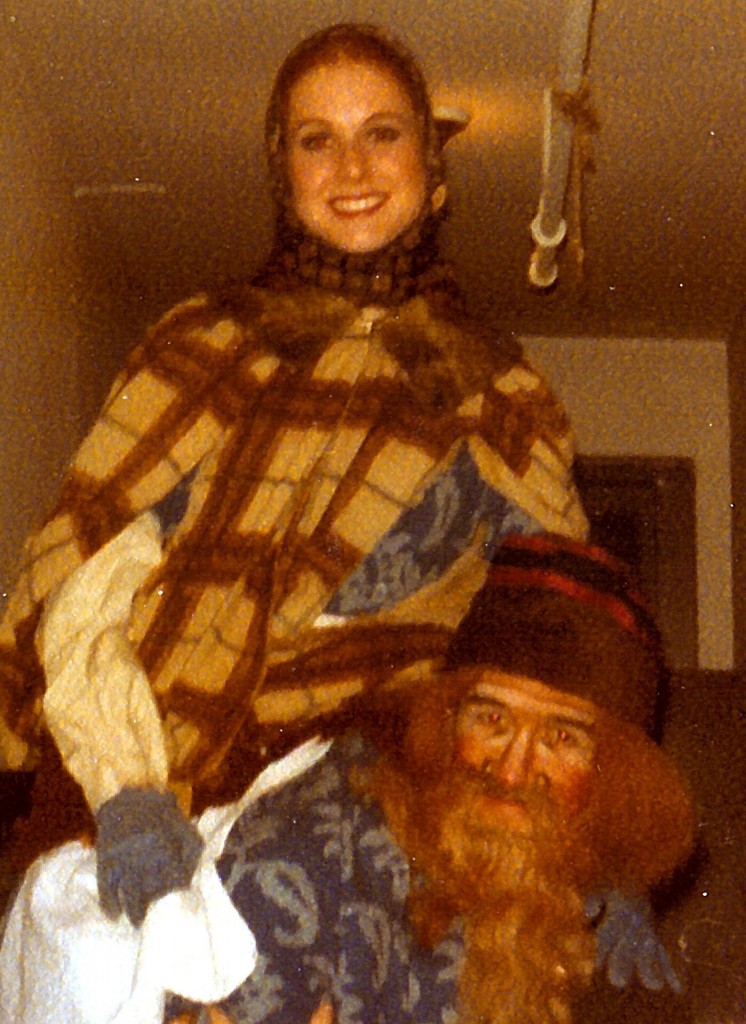 The young dancer, backstage in 1979, during a performance of “Petrushka” with the Joffrey Ballet

That fairy tale chapter of her life ended abruptly at 25 when a car ran over and broke her left foot, leaving her permanently unable to dance en pointe.

“It was a heartbreak. That foot has never been the same,” she says. But the injury also had an upside, in that it prompted her to explore modern dance—a performance style she now believes is better suited to her gymnastic body type and restless personality.

“I’m a person who makes lemonade a lot,” she says.

Leaving New York, she moved to Virginia in 1987, joined two of the area’s then-leading dance companies (DC Contemporary Dance Theatre and Daniel West Dancers) and met John McCauley, an IT specialist and guitarist for the local rock band Neon Hari. They married in 1989.

Soon after, Bowen McCauley began developing a reputation as not only an expressive dancer, but a risk-taking choreographer. Though her first foray into dance composition wasn’t by choice (it was a requirement for classes she was teaching at the Washington Ballet and George Washington University), Washington Ballet’s legendary founder Mary Day took note and complimented some of her early arrangements.

Taking that feedback to heart, she finally worked up the nerve to launch Bowen McCauley Dance (BMD) in 1996. Day passed away that same year.

Since then, the chamber-sized troupe, which includes eight to 10 part-time dancers, has garnered notoriety for its avant-garde interpretations of works by composers ranging from Johann Sebastian Bach to Duke Ellington and Elvis Costello.

Critics have described Bowen McCauley’s pieces as athletic, buoyant, quirky, and delightfully eclectic—as in the case of her edgy 2012 rendition of Stravinsky’s Le Sacre du Printemps (The Rite of Spring) at the Kennedy Center, which Washington Post reviewer Sarah Kaufman summarized as “a muscular, theatrically arresting view of an Armageddon erupting at the intersection of the Electric Circus nightclub and ‘Doctor Who.’ ”

It wasn’t always an easy journey for the experimental artist. After the broken foot came other medical setbacks that threatened to end her career.

In 2000, she visited an ophthalmologist, reporting that a “gray curtain” had twice descended over her left eye—once, while she was driving on the Beltway. She was shocked by the diagnosis: idiopathic dilated cardiomyopathy, a serious heart condition in which one chamber becomes weakened and enlarged, causing it to pump less efficiently. She was 40.

“You just can’t beat your genes sometimes. I’m lucky to be alive,” says the Waverly Hills resident, whose boundless energy gives no indication of the pacemaker-like device now embedded in her chest.

“Her passion for the arts has withstood a diagnosis which can leave many patients depressed and without motivation,” says her cardiologist, Antonio Parente, director of cardiovascular services at Virginia Hospital Center. “Her strength of character has blossomed  despite the challenges of her illness.”

Seven years later, while vacationing in Mexico, Bowen McCauley slipped on wet pavement and fractured her kneecap, necessitating three reconstructive surgeries and months of physical therapy. Doctors told her grimly that she would walk with a limp and never dance again.

Unwilling to accept that fate, she pushed stubbornly and painfully forward, marking the completion of her rehabilitation with a defiant comeback performance. She returned to the stage with a bandaged knee, lurching and careening, as though trapped in a mosh pit, to the Ramones’ “I Wanna Be Sedated,”using her crutches as props. 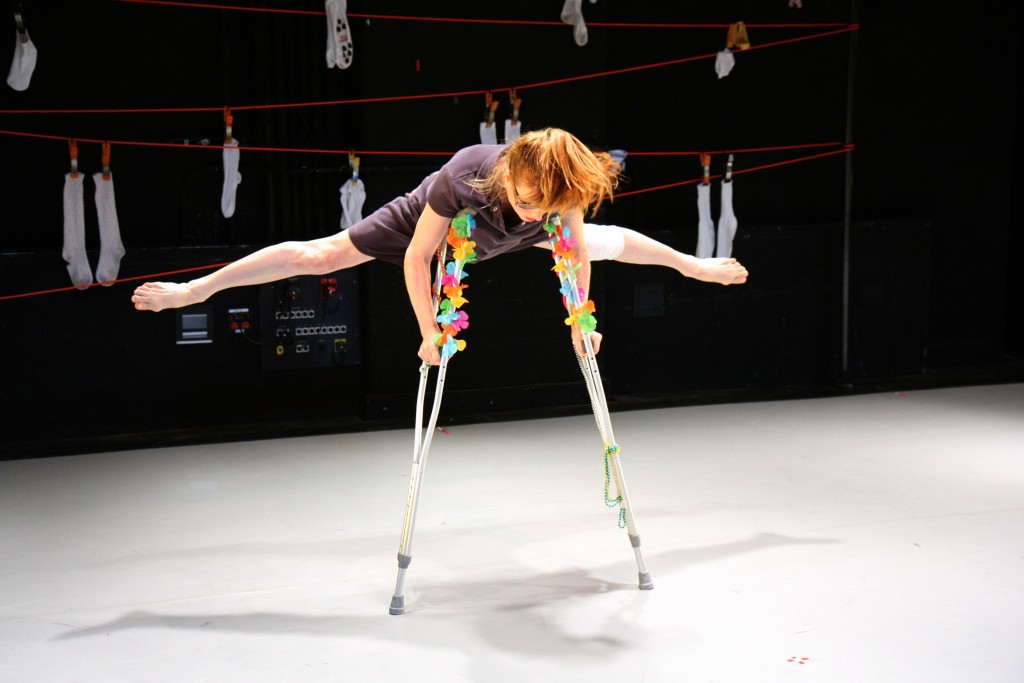 “Lucy is incredibly resilient,” says dancer Alicia Curtis, 29, who studied under Bowen McCauley at the Maryland Youth Ballet and is now in her fifth season with BMD.  “She’s so strong. She always bounces back.”

Physical therapist Jennifer Gamboa, founder of Body Dynamics in Falls Church, has witnessed that same grit firsthand. “We have treated Lucy for multiple orthopedic injuries and she is always positive about the outcome, no matter how arduous the path to recovery may be,” Gamboa says. “She can withstand a tremendous amount of discomfort and is willing to do the work.”

The cathartic performance on crutches, it turns out, was one of several pieces that Bowen McCauley created for the first “Lucy’s Playlist”—an annual performance that now plays to sold-out audiences. Although the first show (which premiered in 2009 at Signature Theatre in Shirlington) was set to tunes from her own iPod, more recent performances have been accompanied with live music by local bands such as Imperial China, Cobra Collective and DC Traffic. (More than 40 area artists responded to the most recent call for demos, from which Bowen McCauley chose 10 songs to choreograph for the 2013 show.)

The playlist is just one of many endeavors that speak to its creator’s collaborative nature, her multidisciplinary curiosity, and her use of dance as an autobiographical medium.

In 2004, Bowen McCauley partnered with TONE—an instrumental rock band that has played at Iota in Arlington and The Black Cat in D.C.—on an interpretation of the band’s song “Telemetry.” (The song’s heartbeat-like rhythm, sheexplains, inspired her to commit some of the feelings about her heart condition to dance.)

Following its debut at the Kennedy Center’s Terrace Theater, BMD and TONE took the performance to the 2006 Schrittmacher Festival in Aachen, Germany (Arlington’s first sister city), where it drew a standing ovation. “Lucy helped us with some edits and made it a better song,” says TONE band member Norm Veenstra.

In another collaboration, Bowen McCauley convinced former U.S. poet laureate Rita Dove to read her poem “Ozone” aloud, while BMD dancers moved to a musical score by Larry Alan Smith, artistic and executive director of Wintergreen Performing Arts in Virginia. (Not long after, Smith signed on as BMD’s music director.) 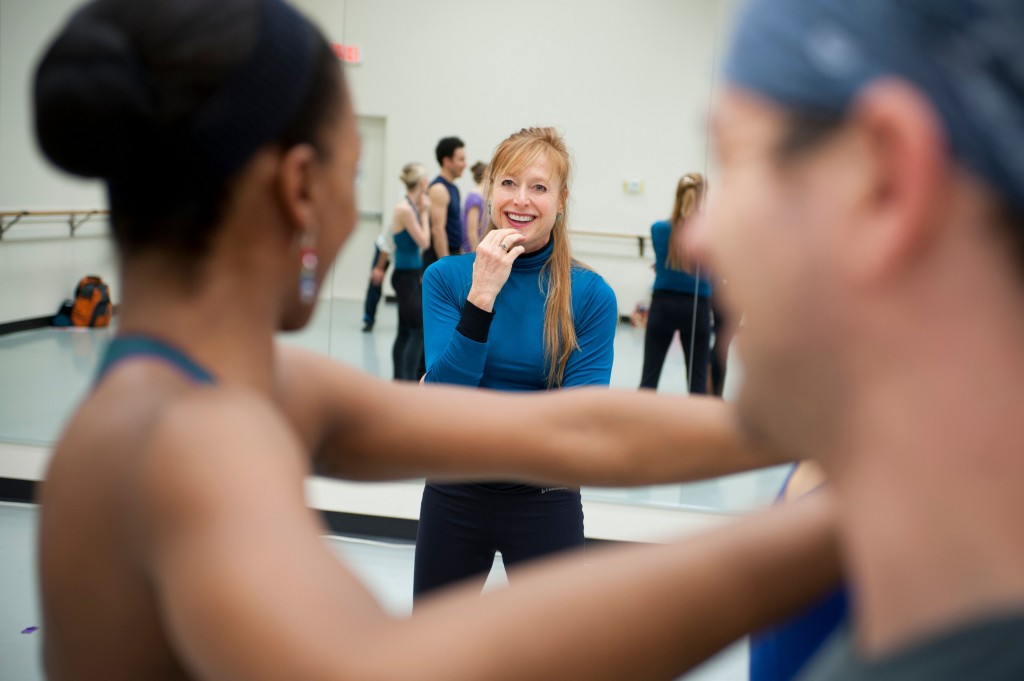 A rehearsal for “Afoot in Vienna.” Photo by Michael Ventura

Bowen McCauley’s latest alliance, with the Austrian avant-garde composer Wolfgang Seierl, explores the interaction between surface and movement. “Afoot in Vienna” features film footage (shot in Seierl’s native city) of the auburn dancer moving across multiple distinct surfaces, from sand, to a staircase, to a barroom floor. In the live performance, dancers move in tandem with the film and Seierl’s music while Seierl plays electric guitar onstage.

The free-form nature of modern dance does yield some occasional frustrations. During rehearsals for “Afoot in Vienna,” BMD grappled with the “how” of translating Seierl’s dissonant musical score—which includes crashes, whale-like moans, and even a blender-like sound—into a kinetic language.

“We’re still a little ahead,” Bowen McCauley tells the dancers during one practice session, jotting notes in a black moleskin notebook. “The music is so uncountable, but we can keep a pulse.”

Her subsequent directions are sculptural and metaphorical. “Do a Rodin hand,” she says at one point. And later: “Think of a squeaky barroom floor…it’s like gum on your shoes.”

The poetry of her tireless instruction is something her dancers have found motivating.

“Lucy is 24/7, and she gives you everything,” says Alvaro Palau, who joined BMD three years ago after 10 years with the Washington Ballet and the National Ballet of Venezuela.  “She’s a really down-to-earth kind of person who cares about her dancers. She takes time for the human side.”

Now 52, Bowen McCauley still dances the occasional “cameo or age-appropriate role,” but for the most part, her emphasis is on choreography and on giving back to the community that helped her launch her company 17 years ago. “I was an egg, and I was incubated in Arlington,” she says, referencing the county’s “Arts Incubator” program, which gave her fledgling company access early on to a practice studio, costumes and office space.

In return, BMD orchestrates an array of community programs, including dance classes for senior citizens, arts workshops for students (the company has maintained a residency program at Kenmore Middle School for the past eight years), and Arlington’s annual Move Me Festival, a celebration of local storytellers, dancers and music ensembles that culminates in a joint performance of professional and student dancers.

“It was really cool,” says Reiss Gidner, 14, a Yorktown High School student who took two years of classes with BMD and danced in last year’s festival finale. “We learned some of the moves the dancers were doing in the company, and we had a lot of opportunities to go out and have more people see us.”

“The residency has galvanized our school community around the arts,” she says.

In one performance last year, Kenmore students danced to music inspired by poems they had written themselves about dancing. The music was performed by the Fairfax Choral Society, with students singing the verses.

Other efforts to evangelize dance have been more informal—such as the flash mob Bowen McCauley drummed up to kick off the Arlington Central Library’s 2011 summer reading program (more than 60 people materialized in the library’s atrium and danced to Mama Mia, while twice as many spectators flooded in to watch).

“Lucy’s belief that dance can be important in everybody’s life is infectious,” says Arlington County Board Chair Mary Hynes, who first met Bowen McCauley in 2006 while gliding across the floor for “Dancing with the Arlington Stars,” a fundraiser for affordable housing. Hynes went on to serve as BMD’s executive director for one year, and later, as its board treasurer.

All told, Bowen McCauley estimates that she has choreographed more than 80 pieces in her career. Some performances, she says, were “real stinkers” that were justifiably panned by critics. But she is unfazed by these and other stumbles, looking back on them as learning experiences.

“For a piece to be good, it has to resonate and offer something more than the sum of its parts,” she explains. “Modern dance can be scary. Sometimes the audience feels uncomfortable and doesn’t know what to think. I want people to somehow connect—to see something about their lives in the dance. My pieces are always about something, but I also like it when 10 different people look at a dance and see 10 different things.”

The beauty of dance, she reiterates, is that it offers something for everyone.

Amy Brecount White is a writer and author in Arlington.