Hit this lively Orange Line hub for tacos, beer, paella, seafood and one of the best hot chicken sandwiches around. 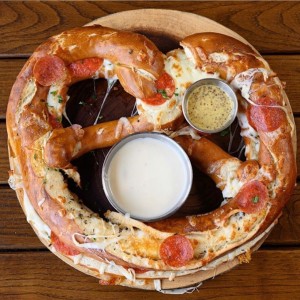 Ballston is booming. This bustling high-rise district along Metro’s Orange Line corridor is home to 16,500 residents and some 950 businesses with more than 22,000 employees, according to the Ballston Business Improvement District, and it’s got a robust dining scene to match. All that activity has made it a delicious destination for hot doughnuts, seafood, beers from around the world and one of the most coveted hot chicken sandwiches in the D.C. region. Put these restaurants and bars on your list. 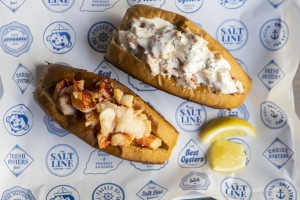 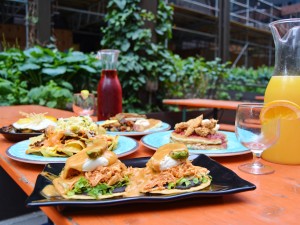 Ian and Eric Hilton’s taco joint opened in December 2021 as a sister outpost to the original El Rey on U Street in the District. The grilled birria tacos (which come with a side of beef consommé for dipping) pair nicely with frozen margaritas in four fruity flavors, including strawberry, lime, mango or watermelon. (If you can’t decide, go for a frozen swirl.) Crowds enjoy piles of nachos during an extended happy hour that lasts from 11 a.m. to 6:30 p.m., Monday through Thursday, and all day Sunday. Nested in the heart of Ballston Exchange, the colorful space is insulated from the street, and its wraparound patio is dog-friendly.  // 4201 Wilson Blvd., Arlington 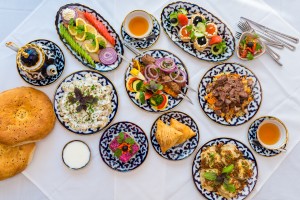 A feast at Rus-Uz (Courtesy photo)

Now celebrating a decade in Arlington, this Russian and Uzbek restaurant serves classic Central Asian dishes like borscht, manti (steamed lamb dumplings) and the national dish of Uzbekistan, plov, a seasoned rice made with lamb, carrots, chickpeas and raisins. The restaurant has a small patio with umbrellas along Fairfax Drive for outdoor dining. Explore its selection of Georgian wines or try a house-infused vodka. You can also visit the adjacent market for deli items, caviar, fresh baked goods, groceries, souvenirs and Russian beer. // 1000 N. Randolph St., Arlington 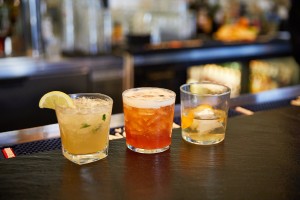 Co-owner Jason Johnston—formerly executive chef at the MGM National Harbor—oversees the menu at this year-old tavern, turning out wings, burgers and a pair of upscale poutines (topped with short ribs or Old Bay and blue crab), as well as more than a dozen signature New York style-pizzas, available by the pie or the slice. Daily happy hours (even on weekends) bring food and drink discounts, and the pub hosts games, trivia or live music nearly every evening. Hit the patio for Sunday brunch and order the Baller Egg Sandwich, made with cheddar, avocado, bacon and tomato on brioche, and a pitcher of Bloody Marys or mimosas. // 900 N. Glebe Road, Arlington

This bare-bones but storied eatery—made famous when it received a mention from the late Anthony Bourdain on an episode of “No Reservations”—opened its first Arlington location in 1987 and moved to Kenmore Street 20 years ago.  Revered for its Peruvian rotisserie chicken, it has tables to eat in, but also does a brisk take-out business. Watch for a new location in Fairfax, set to open this fall. // 932 N. Kenmore St., Arlington 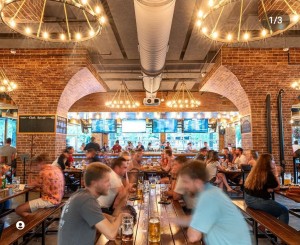 Now celebrating three years in the neighborhood, Scott Parker’s German-American biergarten serves 16 brews on tap, making it a great place to raise a stein. But it’s not just for humans of legal drinking age. The 3,000-square-foot patio—much of which is covered—is dog-friendly and a popular spot for families. Nosh on five kinds of bratwursts, schnitzel, and enormous Munich-style soft pretzels with house-made beer cheese (or stuffed with jalapenos, cheese, pepperoni and other savory ingredients.)  // 4100 Fairfax Drive, Arlington 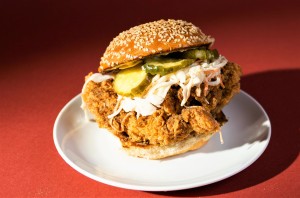 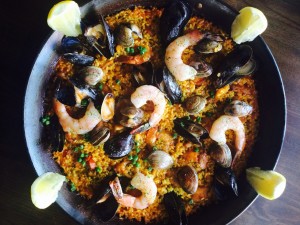 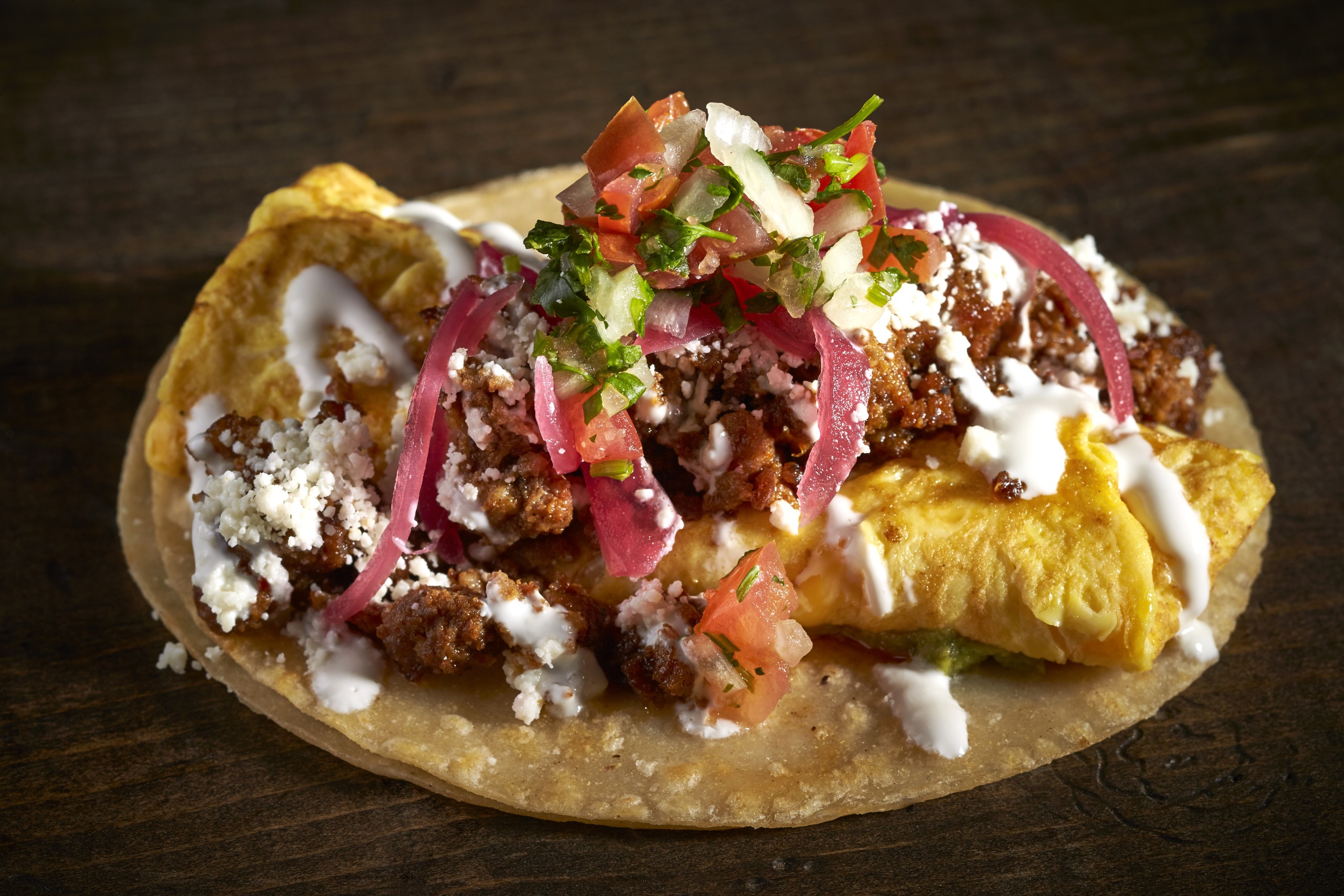 A breakfast taco at Taco Bamba (Photo by Greg Powers)

Opened in 2020, the Ballston location of Victor Albisu‘s homegrown taqueria empire is one of the smallest, but it’s also one of its busiest, with a full service bar and a 17-seat patio space. Several menu items are unique to this particular location, including the “Wario Lopez,” a crispy eggplant-filled quesadilla with pickled jalapeño and chihuahua cheese, and the “Jeneral,” which packs seared ahi tuna, pickled ginger slaw and furikake into a cabbage cup. Enjoy free coffee daily (until mid-afternoon) with any purchase.  // 4000 Wilson Blvd., Arlington 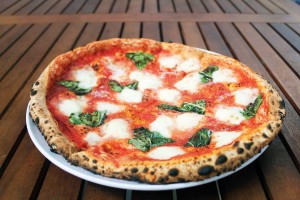 Enzo and Anastasiya Algarme’s Neapolitan pizzeria now has seven locations in the DMV and Richmond, but the shop on Wilson Boulevard, just a few blocks from the heart of Ballston in Bluemont, is where it all began. Parking can be tricky in the tiny lot, but the VPN-certified pies, which adhere to strict Neapolitan pizza-making traditions, are worth the wait. The wood-fired margherita remains a top-seller.  Regulars also fancy arancini—fried risotto stuffed with eggplant or sausage—and house-made gelato. A large rear patio is heated in cooler months and has space for kids (and dogs) to play.  // 5104 Wilson Blvd, Arlington 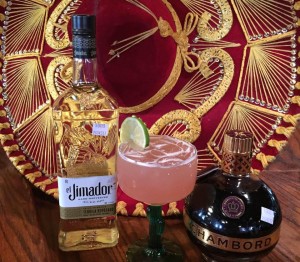 El Paso is marking 30 years of Tex-Mex cuisine in the Buckingham neighborhood, just a few blocks from the heart of Ballston. If you love a good marg, you’ve got multiple options here, including the 1942 Original, made with Cazadores Reposado, Cointreau and fresh squeezed lime juice on the rocks. The kitchen turns out giant platters of fajitas, burritos and tacos, and offers an extensive vegetarian menu, including the “Glebe Platter,” loaded up with mushroom enchiladas, a chile-cheese relleno and a fresh corn tamale. Hungry and on a budget? The weekday lunch specials are all under $12 and include enough leftovers for multiple meals.  // 4235 N. Pershing Drive, Arlington 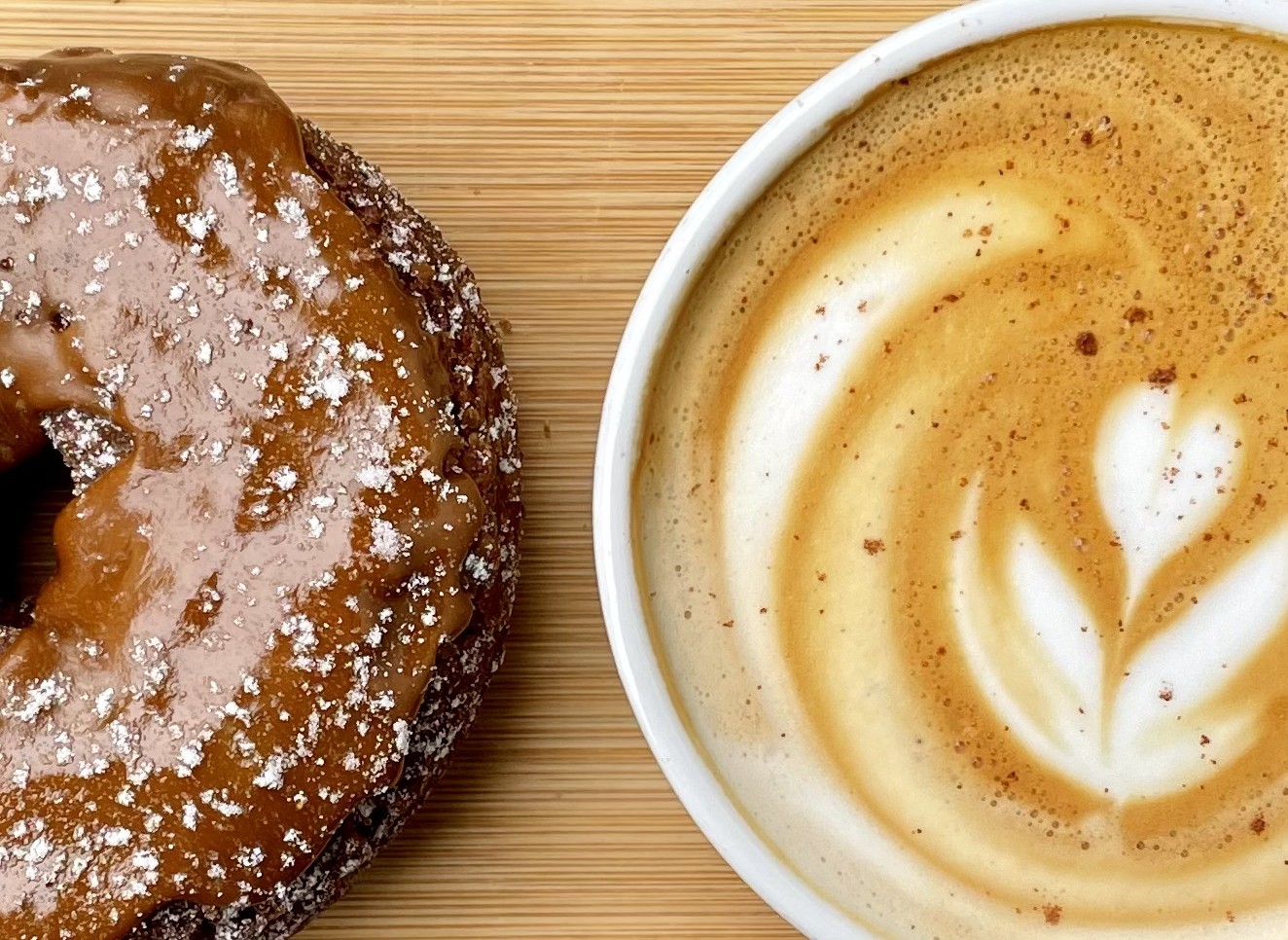 This veteran-owned family operation is known for hand-cut yeast and cake doughnuts in unusual flavors, like honey-dipped and orange creamsicle. (As a testament to its popularity, the shop’s bakers have worn out eight mixers making buttercream filling in the past year alone.) But the goodies in the bakery case aren’t the only reason to visit. The cafe also offers an all-day food menu with offerings ranging from avocado toast and breakfast shakshuka bowls to brisket sandwiches and lobster mac ‘n’ cheese. Next up, Good Company plans to offer catering from a commissary kitchen in Tysons, and a second doughnut shop/cafe is in the works for Amazon’s HQ2 in National Landing, set to open in 2023. // 672 North Glebe Road, Arlington 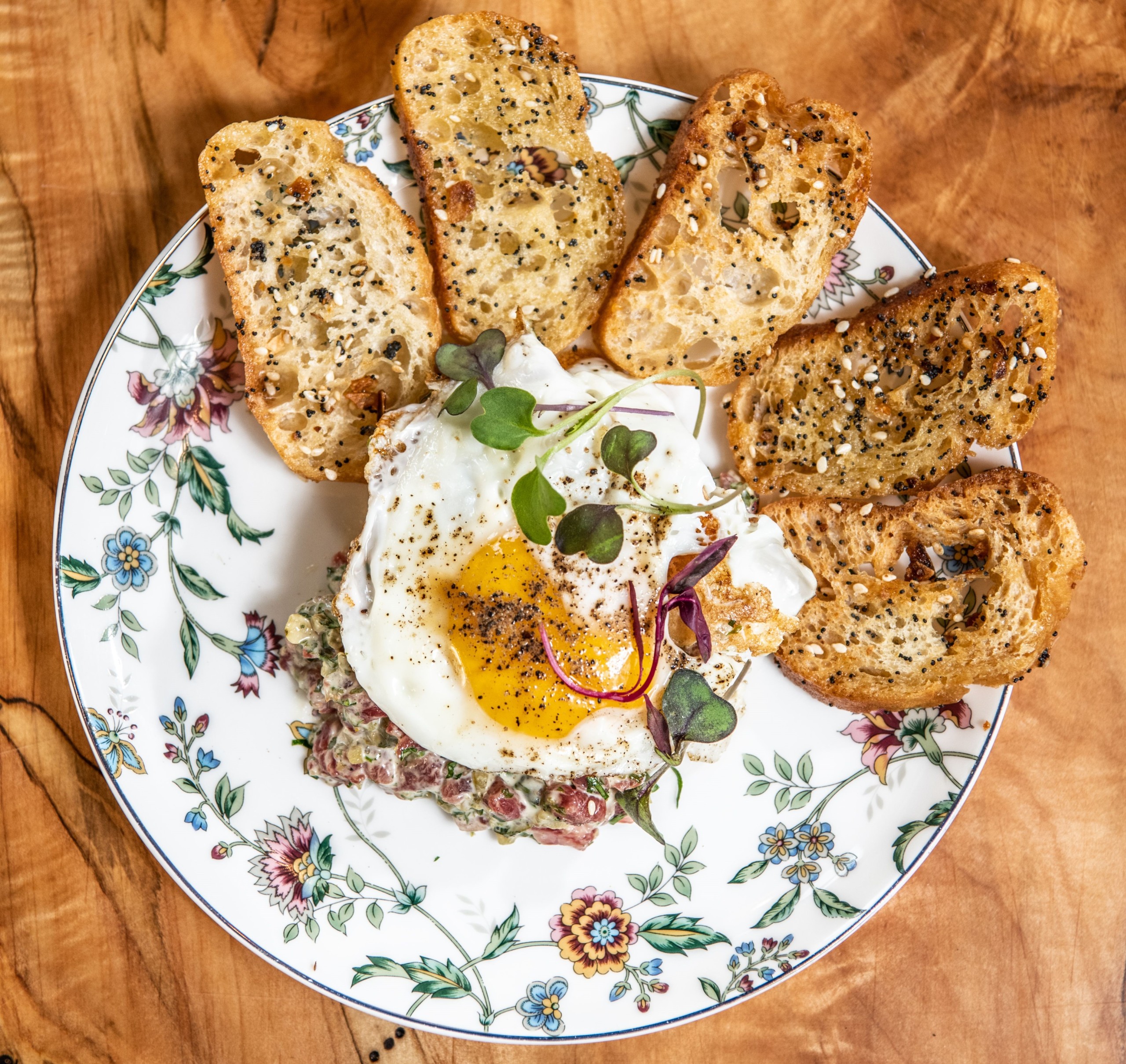 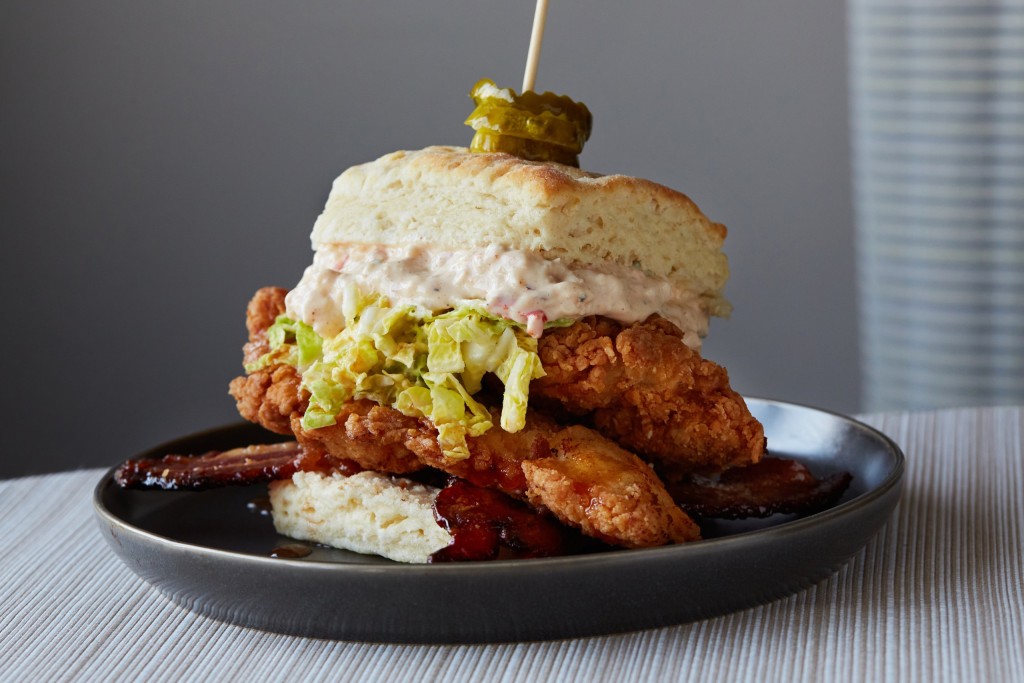 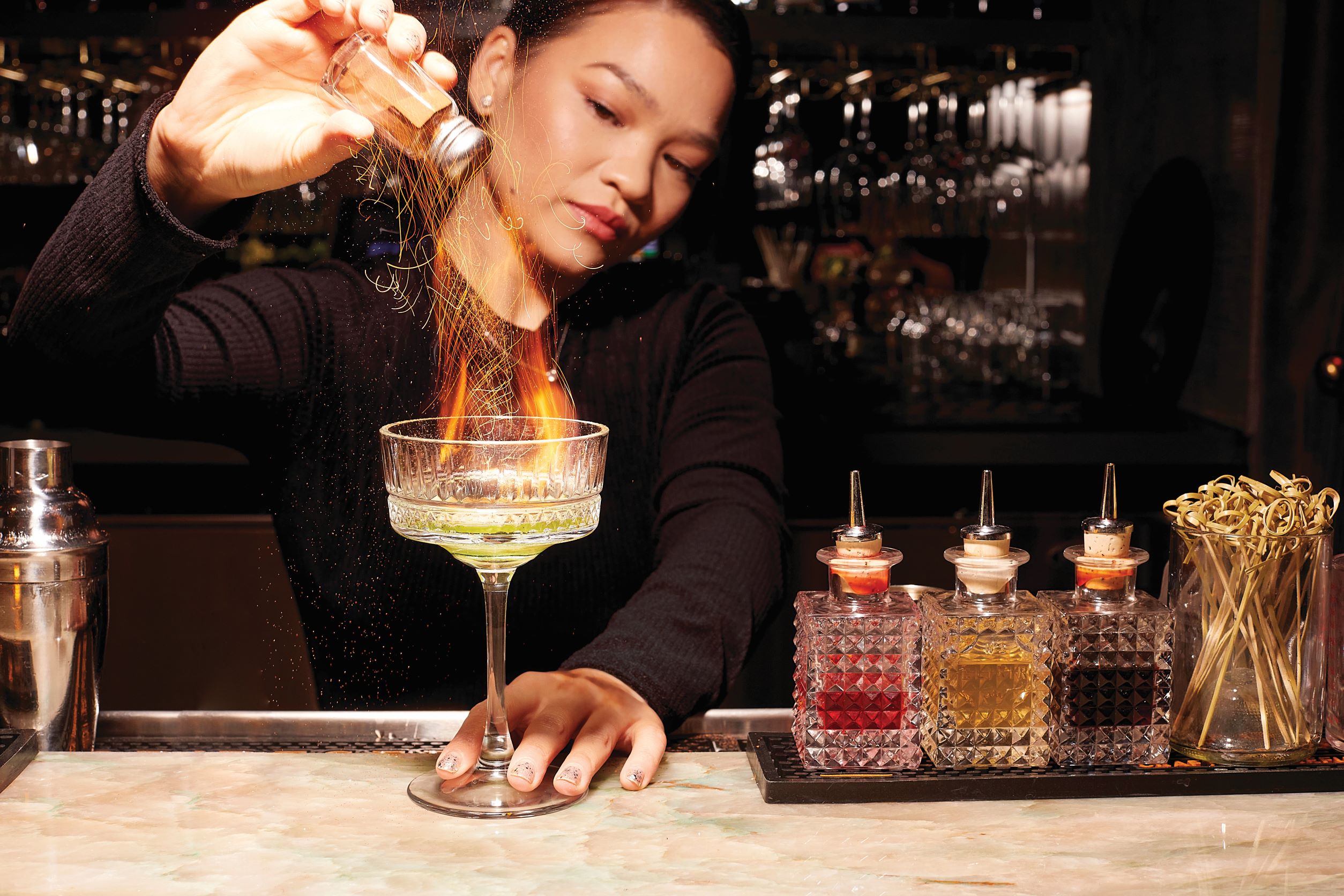