Leo Sushansky's violin performances are fervent and triumphant. Much like his life. 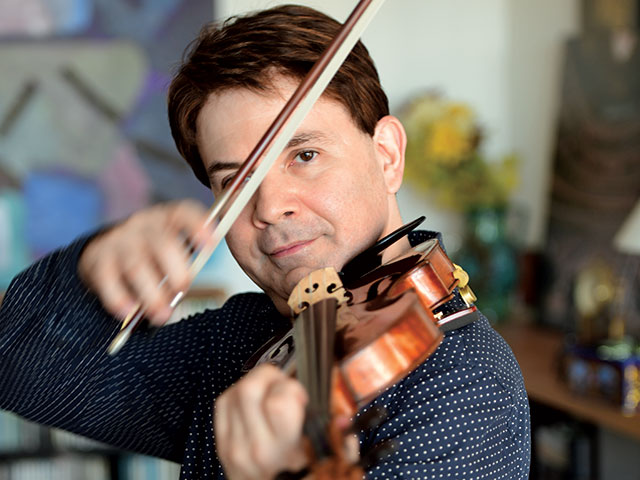 In the fall of 2018, Leonid “Leo” Sushansky tripped over a harpsichord that was lying disassembled on his living room floor and landed on his right hand—not a place a concert violinist and conductor wants to land. He sustained a “boxing fracture,” the same kind of knuckle break brawlers suffer when they punch a jaw with a closed fist.

“My first thought was, I hope it’s not as bad as it looks,” says the soloist and artistic director of the Arlington-based National Chamber Ensemble (NCE), which Sushansky founded in 2007, just two years after his Carnegie Hall debut. “I didn’t want to let anyone down, because the big opening of the [next] season was coming up. I wanted to make sure it was a success.”

The ensemble scrambled and found a substitute violinist and conductor to save the season premiere, “Masters of the Italian Baroque.” Sushansky, with two fingers poking out of a plaster hand cast, did manage to conduct the finale, Pergolesi’s “Stabat Mater.”

“I couldn’t hold the baton, so I put it down and conducted with my cast,” he says. “I was taking painkillers and keeping my mind on the music. The concert was great.”

The D.C. Metro Theater Arts critic agreed, calling the program “magnificent” and declaring, “the National Chamber Ensemble soars above your average classical outfit in skill, delivery, and style.” Sushansky’s accident and performance received so much positive publicity that friends wondered what other body parts he’d be willing to break for an encore.

In the months that followed, the maestro filled his schedule with physical therapy and silent fingerboard practice to keep his left hand nimble while his bow hand healed. When the cast was removed, his right pinkie emerged shorter and curvier than before. To a layperson, the difference would seem minor, but to a violinist, whose bow hand controls rhythm, dynamics and volume—music’s heart and soul—the change was huge.

“I had to rebalance how I used the bow and how I used my fingers,” says Sushansky, who lives near the Pentagon. Before he moved to the D.C. area, he was a scholarship student at the Juilliard School in New York City and studied with famed virtuoso Isaac Stern. “I had to find a better way to keep control.”

In a way, his entire life has been a rebalancing act—a series of upheavals and obstacles to overcome.

It started out smoothly enough in Leningrad, the cultural epicenter of Russia before the Soviet Union collapsed in 1991. Young Leo, with his dark hair and penetrating brown eyes, was the adorable son of Rimma Sushanskaya, a heralded concert violinist with “dead center” intonation and a “rock-steady” bow arm, according to a 1979 New York Times review. (His father was a physics professor.)

Long before he picked up a violin and became his mother’s student at 7, Sushansky’s treasured grandmother, Ba, had taught him to sing and delight adults by warbling tunes while dressed in a sailor suit.

“What I loved from an early age was performing,” says the musician, now in his late 40s. “Whether I was onstage singing or playing the violin, what engaged me was telling a story and making people happy.”

Music was the family’s business and bane. In the 1970s, Rimma’s celebrity became yet another reason the Soviet government blocked the Sushanskys—Soviet Jews—from emigrating to the U.S. to escape personal, professional and cultural discrimination.

But by the time Leo was 8, his parents had divorced, and the government caved to international pressure and gave the family two weeks to get out. They landed in New Jersey, where his Ba had emigrated earlier.

Rimma struggled to reestablish her musical career in Manhattan while Leo attended fourth grade in Elmwood Park, speaking no English and seeing his mother only on weekends.

Nobody knows why struggle brings some people to their knees and lifts others up. Sushansky says his mother’s and grandmother’s love gave him the stamina to overcome a host of obstacles, including a major car accident in his 20s that left him with three broken ribs and 35 stitches in his face.

It also gave him the confidence to pick up a baton. Music is largely a gig economy, and most concert musicians spend decades waiting for someone to hire them to play, but Sushansky wasn’t interested in waiting around. He says he built NCE to guarantee himself the freedom to perform music he loves and to conduct musicians he calls friends.

The ensemble stages five multimedia performances each year that illuminate the classics with projected images and interesting anecdotes about the composers. Concerts may involve two to 16 musicians, depending on the music, and typically are held at the Gunston Arts Center or the Unitarian Universalist Church of Arlington.

“Growing up, there was a formality to classical performance,” Sushansky says. “The performer came onstage, bowed, played and went off. There was a distance between performer and audience. I want to create a more welcoming environment that facilitates a deeper connection.”

The National Chamber Ensemble’s next concert, on Dec. 18, will feature seasonal holiday favorites, including Handel’s Messiah.