Economic differences are also evident in South Arlington schools such as Carlin Springs and Randolph Elementary, where 80 percent of students qualify for free or reduced-price lunches. By comparison, less than 5 percent of students at Jamestown, Nottingham and Taylor (all located in the north) qualify for this government benefit, according to Arlington Public Schools (APS).

This becomes a cyclical force, insofar as perceptions of schools tend to influence real estate prices. (Several real estate agents, speaking on condition of anonymity, confirmed that there are homebuyers in today’s market who perceive South Arlington schools, which are more economically and ethnically diverse, as academically weaker. As a result, these buyers tend to avoid neighborhoods in those school districts and are willing to pay a premium for “better schools.”)

Another uncomfortable reality feeding into the equation is community engagement, which some observers say is more pervasive in the county’s northern neighborhoods.

There is a perception that municipal problems get taken care of faster on the “north side,” says Alfred Taylor Jr., a lifelong resident of Nauck (his father was a county employee for four decades) who served as president of his neighborhood civic association from 2001 to 2006, and again from 2011 to 2014. But northern residents may also be more likely to call and report issues.

“If there was a pothole in the street [here],” Taylor says, “the pothole would remain. But later you would come to find that no one called. The county doesn’t just drive around looking for potholes.”

Generally speaking, northerners tend to be squeakier wheels, says John Antonelli, who has served on the Arlington County Community Services Board, the County Housing Commission and held other posts. “They are much more politically savvy [in the north] than most South Arlington families,” says the government analyst, who lives in Douglas Park near Columbia Pike.

But time is also an issue. “If you’re working three jobs, you don’t have time to go to PTA meetings” or to petition the county board when you’re unhappy with its plans, Antonelli says. Residents who are non-native speakers also are less likely to write letters to elected officials or speak up in community forums. 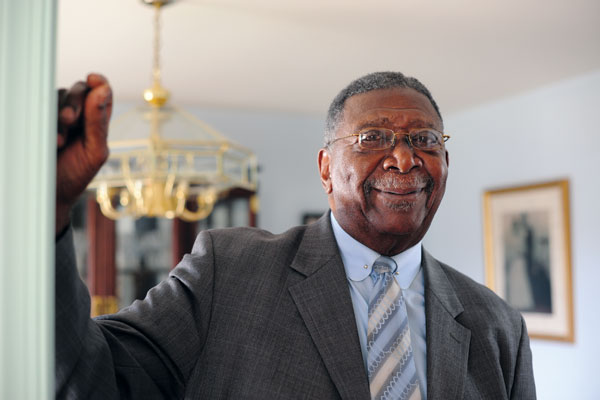 Historically, North Arlington residents have been more likely to mobilize NIMBY (not-in-my-back-yard) protests against proposals they disagree with. Consequently, South Arlington has been saddled with “the things that nobody wants,” Antontelli contends. As examples, he cites a detox and rehabilitation center on Columbia Pike, and the county’s Department of Human Services, which is in the process of moving all of its operations from Clarendon to the county’s Sequoia Plaza just south of Route 50.

To be fair, North Arlington is also home to a few county facilities that are less than bucolic. Among them: a salt dome, a leaf mulch site and a water tower in the Old Dominion neighborhood.

Nevertheless, the perception of geographic unfairness can be hard for county officials to overcome. Especially when they are operating in the wake of decades-old animosities—like the ones that former county board chairman John Purdy cemented in 1975 in an op-ed letter to The Washington Post, which he penned in response to citizen complaints about an existing incinerator (used to burn sludge) and an expanding sewage plant off of South Glebe Road.

“The current preoccupation of some persons with the idea that South Arlington is somehow a stepchild in terms of services seems to me to have stemmed from a combination of frustrated political ambitions,” Purdy wrote (referencing the failed attempt to overhaul the county board structure to a district-based system), “and the disgust of a small neighborhood affected by the incinerator and the sewage plant.”

That, in turn, prompted responses from a number of South Arlington residents, including John Marr, then president of the Arlington Ridge Civic Association (whose neighborhood overlooks the sewage plant), Emmy Lou Runyan and Sherman Pratt.
Together, they outlined a litany of concerns, from the sewage plant and sludge-burning to the dominance of I-395 and other highways in the South Arlington landscape.

Why was it that in North Arlington, citizen complaints had resulted in Route I-66 being pushed below grade and downscaled to occupy a smaller footprint, whereas public concerns over highway traffic and environmental blight in South Arlington seemed to be falling on deaf ears, they wondered?

Though Wakefield High School—the only Arlington public high school south of Route 50—was recently renovated to the tune of $118.6 million, the project was third in line after Washington-Lee (renovated in 2009 for $99.4 million) and Yorktown (which reopened in 2013 after a three-phase, $84.1 million remodel).

Some residents viewed the pecking order as evidence of a northern bias, although Arlington County Board Chair Mary Hynes insists that when the buildings were being evaluated, Wakefield appeared to be in the best shape of the three. Only after construction was underway was it discovered that the original Wakefield building had mold issues.

“So you can say the school board or the superintendent or the head of design and construction or facilities should have taken a different approach,” Hynes says. “That would be legitimate, and that approach may have brought Wakefield to the front of the line. But by all the metrics that the board was looking at [during the evaluation phase], Wakefield didn’t need to be done as urgently as Washington-Lee.”

Tensions were again ignited in January when APS announced Thomas Jefferson Middle School and Community Center (TJ) as a potential location for a new elementary school building to alleviate overcrowding. One site solution would have encroached on the park and athletic field next to the school, taking a bite out of neighborhood green space.

The timing of the announcement came just as the county also began looking into an expansion of Benjamin Banneker Park, near North Sycamore Street in North Arlington, Antonelli points out.

Though the proposal for TJ has since been amended (the revised plan does not compromise green space, but instead confines most of the construction to an existing surface parking lot), the county board has asked APS to look at other options.

Hynes acknowledges that the final decision, whatever it may be, is bound to leave some citizens unhappy.

“There is no place where there’s zero impact,” she says, noting that the school system needs to create an additional 700 elementary seats,1,300 middle school seats and 2,200 high school seats to accommodate a countywide capacity problem and a growing student population. (This year alone, APS welcomed 1,200 new students.) “TJ may be one of [the sites],” she says. “It’s a good plan.”