The first weekend of October brings a ribbon-cutting for a new mural, a gallery show, a walking tour examining Lee Highway's history of racial injustice, and a fall festival. 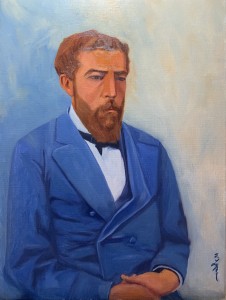 “What I like to do with my work is to use it as a facilitator of conversation, or to educate—to highlight unsung heroes,” says the painter and sculptor, who lives in Pentagon City.

Coates is one of four artists exhibiting work during this weekend’s two-day celebration of the renaming of Lee Highway to Langston Boulevard. The festivities begin at 5 p.m. Friday with the unveiling of an original mural of abolitionist, activist and attorney John Mercer Langston—the first Black representative from Virginia in the U.S. House—painted by D.C.-based artist KaliQ Crosby on the facade of Sport Fair.

Attendees can then head across the street to Dominion Lighting for a reception and gallery show featuring works by local Black artists, which runs through the end of the month.

Coates, a member of the county-appointed working group that researched and recommended new names for the road, painted two original pieces for the art show. One is a depiction of the Calloway United Methodist Church on Langston Boulevard, founded in 1866 by residents who were formerly enslaved. The other is a portrait of Langston.

Coates also serves on the equity committee of the Arlington County Commission for the Arts. Last year, the committee met with arts groups throughout the county to discuss and develop the commission’s statement on equity.

“I’m really proud of Arlington County that’s really pushing for diversity and equity in the community,” she says. 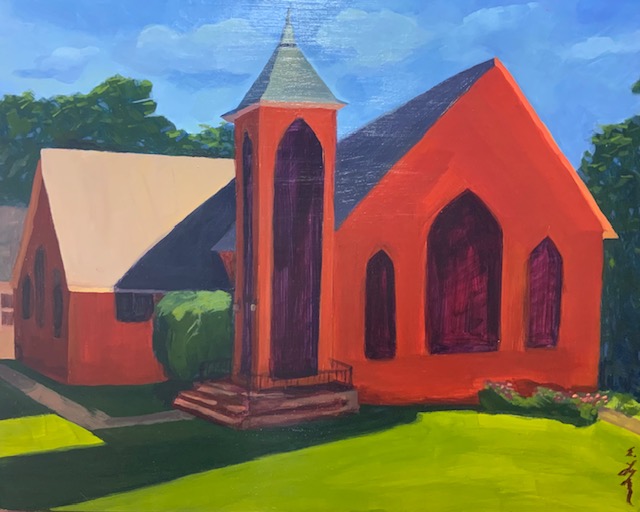 Coates painted the Calloway United Methodist Church, founded in 1866 by formerly enslaved Arlington residents, for the October exhibit. (image courtesy of the artist)

In addition to paintings by Coates, the Dominion Lighting exhibit will include works by Reshea Deloatch, Barry Barnett Keith and Justyne Fischer.

Fischer, a D.C.-based printmaker and photographer, has taught art at South County High School in Lorton since 2006, and has pieces in permanent collections throughout the country, including at the Boston Athanaeum and Tulane University. Much of her work focuses on racial injustice, including what she terms “social memorials.”

“Social memorials honor those killed unjustly by police and vigilantes,” she said via email. 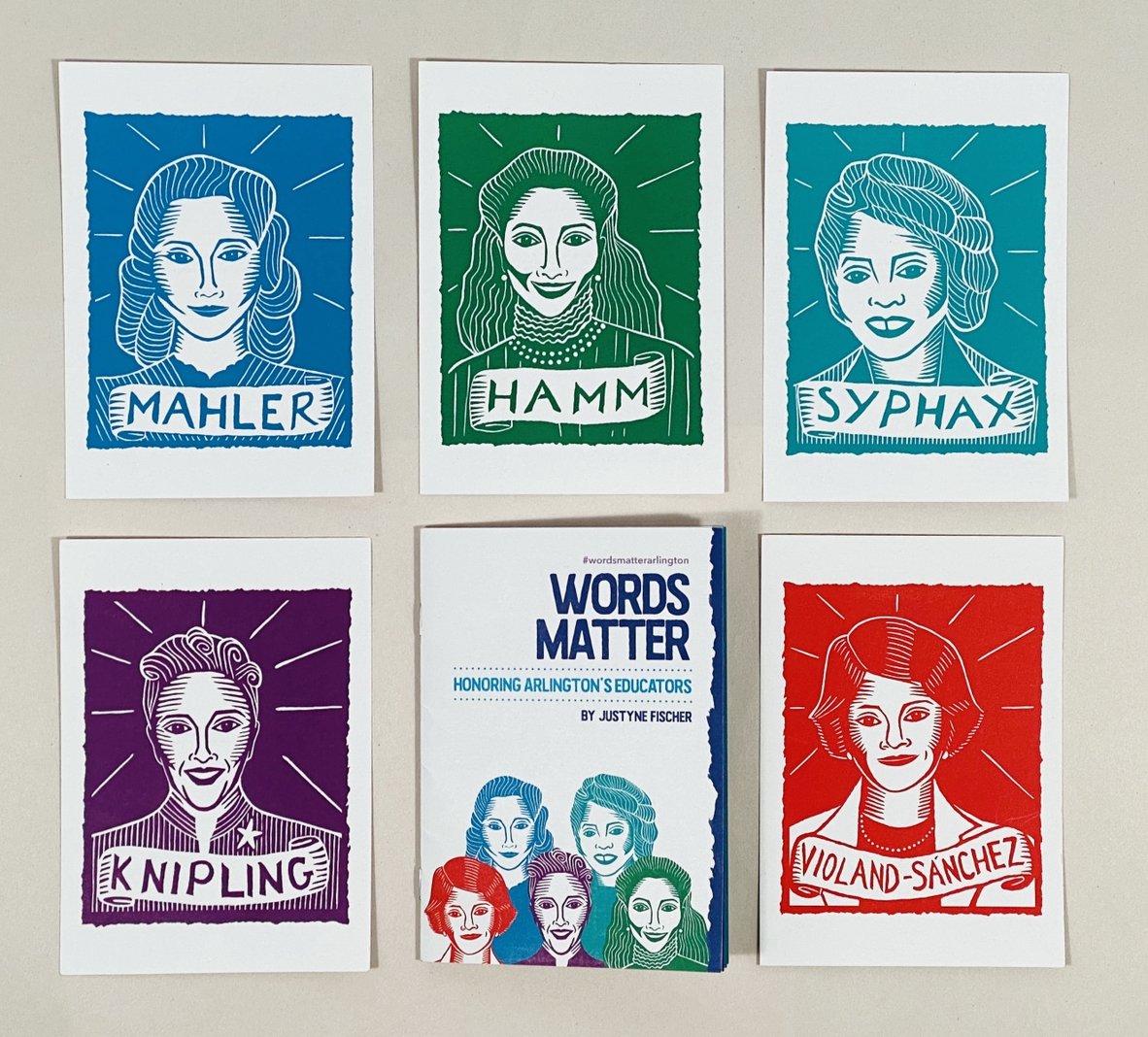 One such work is a diptych called “Systematic.” It depicts side-by-side images of a slaveowner whipping a slave in chains, and a police officer wielding a gun above a hooded Black male. When the viewer steps in front of the gun’s barrel, blue LED lights flash from a police car behind the police officer.

“The more things change, the more they remain the same,” Fischer says of the work. “Police profiling and brutality leads to inflated arrests and slavery in our prisons.”

Fischer has contributed six pieces to the Langston Boulevard exhibit, including a pyrogravure (a type of wood etching done with a heated instrument) portrait of the former congressman in which a set of shackles is broken. Langston was born free in Louisa County, Virginia in 1829. 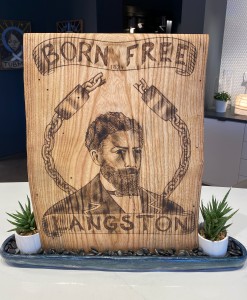 A pyrogravure of John M. Langston by Justyne Fischer (courtesy of the artist) 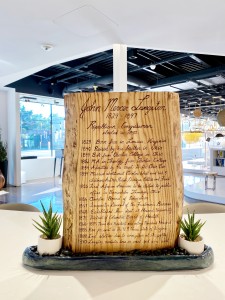 On the reverse side of the portrait, Fischer details notable achievements in Langston’s biography (courtesy of the artist)

Langston served as inspector general of the Freedmen’s Bureau after the Civil War. He also established the law department at Howard University, becoming its dean in 1868, and served as the first president of what is now Virginia State University. In 1888, he ran for Congress and was seated in 1890 after a lengthy dispute over election results, becoming the first representative of color from the commonwealth. A segregated Arlington elementary school that operated during the Jim Crow era bore his name.

On July 17, the Arlington County Board voted to rename Route 29 (known as Lee Highway within Arlington’s borders for nearly a century) as Langston Boulevard. The vote followed a months-long process in which a county-appointed working group researched and recommended alternate names for the road. The county may begin replacing signage as early as mid-October. 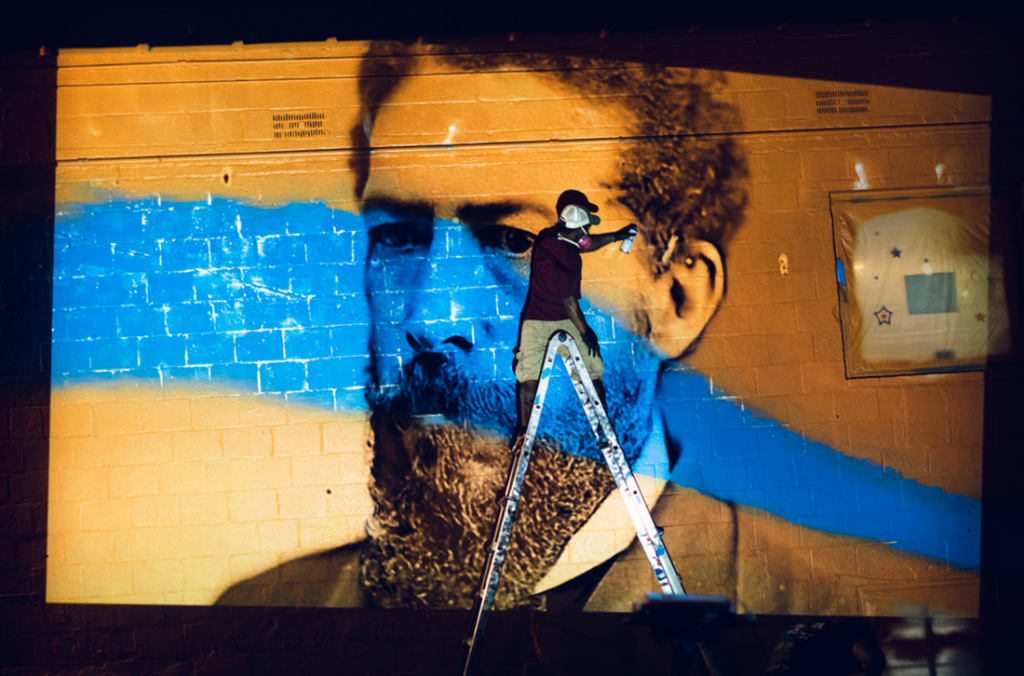 A new mural of John M. Langston by KaliQ Crosby is painted on an exterior wall of retailer Sport Fair (courtesy photo).

KaliQ Crosby, the artist behind the new mural of Langston, has painted several other murals in the area, including one of poet Amanda Gorman in Dupont Circle and another that pays tribute to D.C.’s go-go history, unveiled last month in the District’s Shaw neighborhood.

Arlington is actively supporting local creatives, Coates says, including Black artists. The county arts commission, she notes, will be awarding five local artists $10,000 each under a newly developed AWARE (Artists Working to Address and Reimagine Equity) grant. These and other actions amount to progress, she says.

This post has been updated to clarify the year in which Langston became a member of the U.S. House of Representatives.

The Langston Boulevard celebration begins with the mural ribbon-cutting at Sport Fair (5010 Langston Boulevard) at 5 p.m. on Oct. 1 and continues with a reception and exhibit opening at Dominion Lighting (5053 Langston Boulevard) from 5:15-7 p.m. On Oct. 2, the walking tour runs from 10-11:30 a.m., beginning at Langston-Brown Community Center (2121 N. Culpeper St.). The fall festival runs from 11 a.m.-3 p.m. at Woodstock Park (2049 N Woodstock St). All events are free.