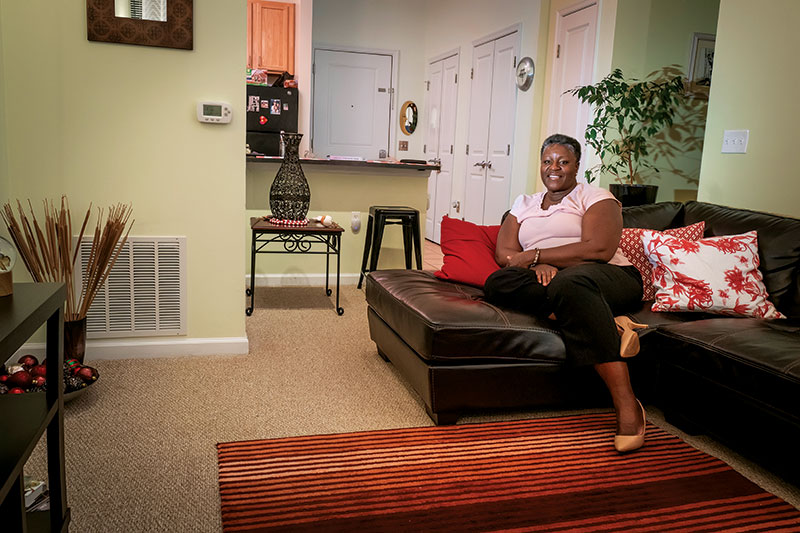 Yvonne Aiken in her living room. Photo by Thom Goertel.

Yvonne Aiken can burst stereotypes about affordable housing residents in a hurry. She has a track record of success as an executive assistant and project manager, and is the mother of a high school honor student. She earns in the $50,000s—what would be considered a tidy sum in other parts of the country.

Yet to afford living in Arlington, she needs the reduced rent that comes with her unit in a midrise building owned by the nonprofit Arlington Partnership for Affordable Housing. Two-bedroom apartments there are $1,400 to $1,700 a month, depending on the tenant’s income. Aiken figures it saves her about $1,000 a month, compared with what she would pay elsewhere. “I would probably have to take on another job and have another adult to [help pay that rent],” says the single mom.

Her neighbors include other working professionals who were pushed out of market-rate apartments as area rents rose faster than their incomes.

“These are educated strivers that have families,” Aiken says. “Everyone living here does not have 10 kids. These are the people you bump into at the supermarket, the people your children play with at recess.”

The current picture is rather bleak, says Michelle McDonough Winters, executive director of the local nonprofit Alliance for Housing Solutions (AHS). Between 2000 and 2017, Arlington’s supply of rental units for moderate-income families plummeted by about 14,000. Most of the households that qualify for MARKS (shorthand for market-rate affordable units) earn less than 60 percent of the area median income (AMI)—or a total of about $70,000 a year for a family of four.

“Many of the units are still there; they’re just not affordable anymore,” Winters says, because landlords have raised the rent. Other modest buildings have been demolished to make way for luxury apartments, condos or townhomes.

A county report issued in 2017 surmised that only about 8.2 percent of Arlington’s housing stock—9,369 units—was affordable for households earning less than 60 percent of AMI. To meet demand, the county’s Affordable Housing Master Plan estimates that Arlington will need more than twice that share—17.7 percent—by 2040.

Even families earning a bit more are struggling to find places to live inside county lines. The master plan calls for adding 600 units a year for families earning less than 80 percent of AMI (about $93,700 for a family of four). But the actual number of affordable homes coming out of the pipeline has been averaging about half that number, says Arlington County housing director David Cristeal.

Part of the problem is that wages haven’t kept up with housing prices, observes Jeannette Chapman, deputy director of George Mason University’s Stephen S. Fuller Institute for Research on the Washington Region’s Economic Future. Recent job growth has been concentrated in two distinct categories: high-paying jobs that drive up housing prices and low-wage service jobs held by part-timers who struggle to pay rent.

Complicating matters is the fact that Arlington County, which spans a mere 26 square miles, is almost entirely built up, much of it occupied by low-density, single-family neighborhoods that are popular with residents. Finding space for new housing is a challenge. Even the areas that do have more density and a higher share of affordable housing—such as the Lee Highway and Columbia Pike corridors—have mostly one- and two-bedroom apartments that are too small for many working families, Cristeal says.