“This is a really big problem for the future of our region,” she says. “We have a moral imperative to do a better job of providing affordable housing for the people who need it. We won’t be a successful community if we don’t have housing opportunities for people of all walks of life.”

The dearth of affordable housing also makes it harder for Arlington businesses to recruit workers. Employees who live close by can work longer hours and fill jobs that aren’t 9-to-5, like opening up the Starbucks at 5 a.m., or the day care at 6.

“Do we really want to be the type of gated community that only has elite workers and we park our service workers and the adults taking care of our children outside?” asks Janopaul. “We didn’t build this community with all these great amenities so we could keep out half the people who work here.”

Even county staff are among the out-of-town commuters. Currently only 24 percent of Arlington County employees actually live in Arlington, Cristeal says, including first responders. That number has held steady for the past decade. 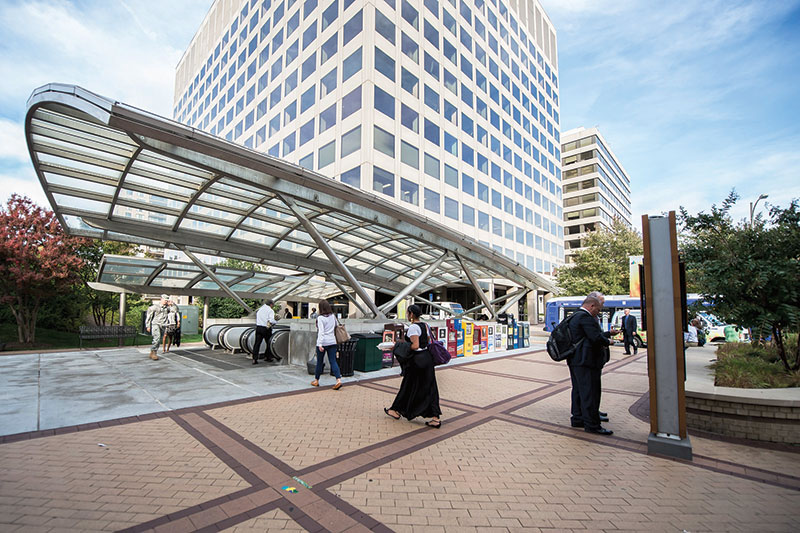 Into this complex landscape now comes an economic gorilla. In November, Amazon announced plans to build a new corporate campus in Northern Virginia, bringing 25,000 new jobs to Arlington. The tech giant will take over swaths of Crystal City and a contiguous section of Alexandria that together have been redubbed National Landing.

Proponents of the deal see it as a huge win, noting that the influx of new jobs will help to offset some 34,000 jobs that were lost over the last two decades—casualties of the military’s base realignment and closure (BRAC), sequestration and federal agencies that have relocated outside of Arlington.

But the news of Amazon’s impending arrival has been met with mixed reviews. Janopaul says it was already financially tough to build affordable housing in Crystal City and Pentagon City. Now speculators are pouncing on that area’s real estate, potentially inflating prices even more.

Aiken, who sits on the APAH board, worries that Amazon’s affluent workforce will only drive up housing prices and exacerbate income differences. “You have the haves and the have-nots. We have got to scramble that in this America,” she says.

The Amazon effect in Seattle, home of its original headquarters, may be telling. The company has taken heat there for rising rents that displaced some people and increased the city’s homeless population.

Amazon’s vaunted $150,000 average salary isn’t an ideal ingredient in an affordable housing crisis, but not all of its Virginia workers will make top wages and not all will be shopping for expensive homes. Observers point out that the multiplier effect of its corporate and employee spending will also create jobs for service workers who need affordable housing—nannies, baristas, hotel maids and landscapers, to name a few.

Alexandria housing director Helen S. McIlvaine hopes the Amazon deal will be a net positive, sparking developers to get moving on projects they have proposed but not followed through on. “This likely will be a trigger that people sitting on the sideline will say, ‘I’m going to take my development approval and build this building,’ ” she says.

Janopaul sees elements of “yin and yang” at play. Amazon’s workforce will surely create more housing demand, but the tech giant’s arrival will be tempered with a $30 million annual infusion of additional state and local funding for housing. And once Amazon begins to fill up some of the empty office space in Crystal City—much of it left vacant as a result of military spending cutbacks—those properties will start producing more county tax revenue (about $315 million over 16 years) to fund critical county services.

Furthermore, the Amazon shift won’t come like an avalanche. The buildup will be gradual, and its workers will bring many different family compositions and housing preferences. About 16 percent of newcomers are expected to settle in Arlington, but twice as many will likely live in Fairfax County, according to a November study by GMU’s Fuller Institute.

“I don’t think adding 25,000 jobs over 10 years is going to fundamentally change our market,” says Arlington County board member Katie Cristol. “We had an affordable housing problem before.”