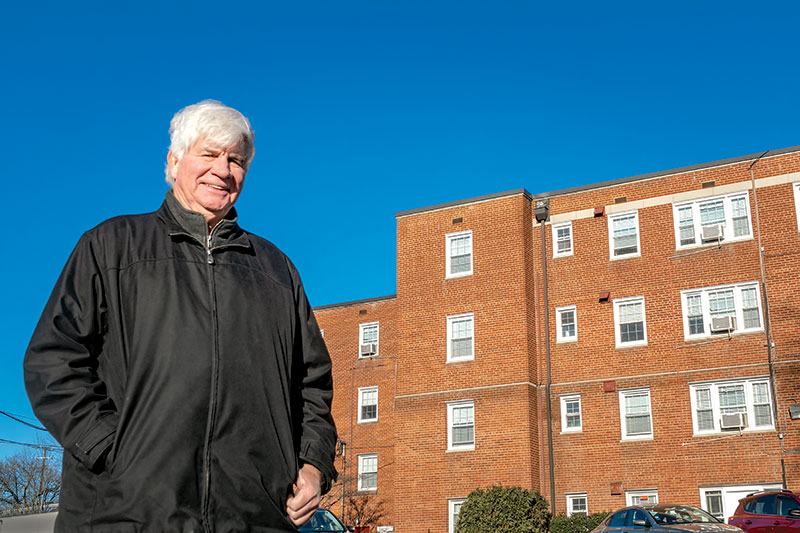 Ralph Johnson at one of his properties. Photo by Thom Goertel.

The age of the buildings is another issue. Many of the complexes that house Arlington’s working class are so old that owners are tempted to sell or raze them. Ralph Johnson, who operates under the business name Johnson Associates, owns 230 units in Arlington and several hundred more in neighboring jurisdictions, many of them occupied by tenants who qualify for MARKS. He says his lead maintenance guy often shakes his head over the sad state of the crumbling buildings. Problems like collapsing pipes that must be chiseled out of concrete are not uncommon. He says his units “are always going to be the bottom rung of the rental market.”

“Who’s going to pour money into these old units?” asks Johnson, who lives near Arlington’s Williamsburg neighborhood. “It gets to the point where the infrastructure is so deteriorated it’s an enormous cost.”

Other property owners have given up and bulldozed old buildings to start fresh with more expensive units, but Johnson says he doesn’t have the money or inclination for that—not even with the new prospect of Amazon speculators. “I like providing housing for ordinary people,” he says. “I’m an ordinary guy.”

“We’re victims of our own success,” says developer John Shooshan, chairman of the Shooshan Co., whose current portfolio includes a handful of high-end high-rise buildings along Metro’s Orange Line corridor. The strong local economy has precipitated a run-up in housing prices, he observes, but that could backfire if the middle and lower ends of the market disappear. “If we don’t solve this, we are going to kill the goose who laid the golden egg.”

Nina Janopaul, president and CEO of the Arlington Partnership for Affordable Housing (APAH), notes that smart-growth proponents were ahead of their time in creating walkable urban communities along transit lines. But they didn’t foresee the loss of diversity that would stem from gentrification. Between 2000 and 2016, Arlington’s white population increased from 60.4 percent to 63 percent, while its black population fell from 9 percent to 8 percent. The number of Hispanic residents dropped from 19 percent to 16 percent over the same time period. 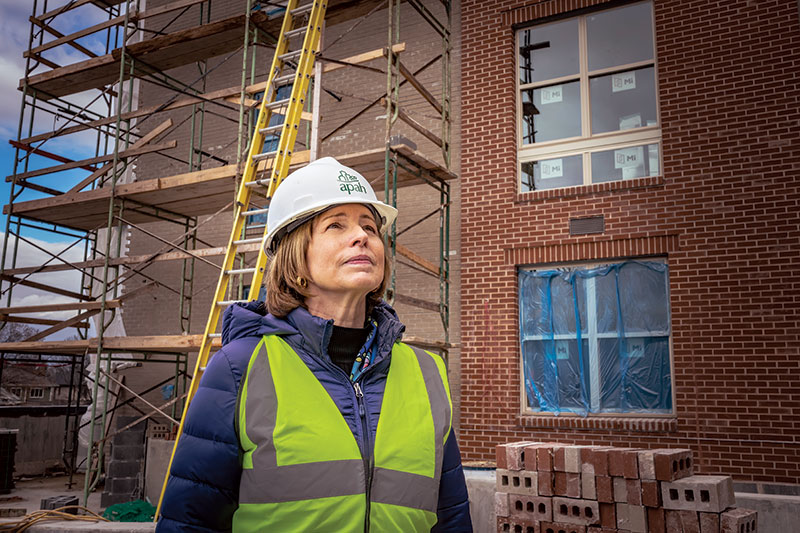 Nina Janopaul, president and CEO of the Arlington Partnership for Affordable Housing (APAH), on a job site. Photo by Thom Goertel.

The decline in affordable housing affects everyone, not just those living paycheck-to-paycheck. The county will always need lower-wage workers, says Winters of AHS. If they are driving in from long distances because they can’t afford to live in Arlington, traffic will get worse. And long commutes put additional strain on families.