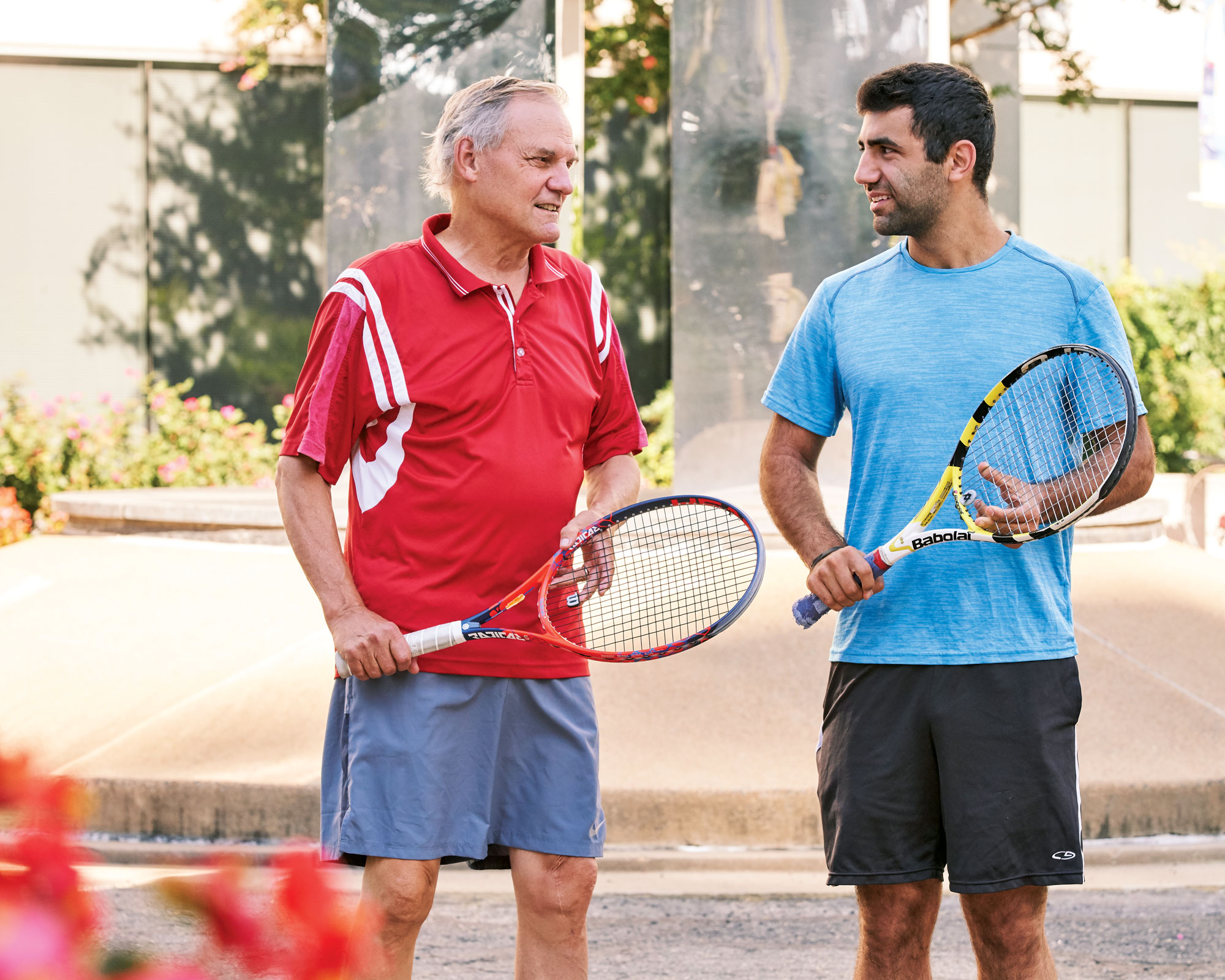 Writer Jeff Porro (left) and entrepreneur Evan Samet share a love of tennis, as well as a workspace at Metro Offices in Ballston. Photo by Erick Gibson.

It’s been 27 years since Jeff Porro decided to give freelancing a try in 1991 after leaving his position as associate editor of Education Week’s Teacher Magazine (then based in the District). “At first I did any kind of writing I could,” says the Ballston resident, “including assignments I wasn’t suited for,” because he was afraid to turn down work.

“I had spent my whole work life getting one assignment, finishing it, and getting another. Suddenly I had to find the next assignment myself.”

Porro started out editing manuscripts and gradually began writing promotional brochures and annual reports. During that time, he discovered a magazine article about Melvin B. Tolson, a professor at Wiley College, a historically black Texas college, who had inspired his students to form the school’s first debate team in 1935. That team went on to challenge Harvard in the national championship.

Fascinated with Tolson’s story, Porro began digging and doing his own research. Eventually he found himself working with his friend and UCLA classmate, screenwriter Robert Eisele, to turn the story into the 2007 film The Great Debaters, starring Denzel Washington. “Because I was freelancing, I had the flexibility to carve out time to work on it,” he says.

There was, however, a hiccup in his employment status while the film project was underway. In 1999, Porro decided to take a job as senior vice president at a small PR firm. He and his wife, Stacy Roberts, a fundraising executive, were starting a family and he wanted the security of a traditional corporate job.

It wasn’t as secure as he thought. Soon after he was hired, the firm ran into financial trouble, and Porro was laid off in 2002. “I realized that I didn’t like working for someone else because their decisions could affect my ability to work,” he says. “After that, I realized there was no going back.”

During his second stint as a freelancer, Porro focused mainly on speechwriting. (He has written speeches for former Sprint CEO Dan Hesse, Nature Conservancy president and CEO Mark Tercek and Kevin Martin, vice president of public policy for Facebook.)

The most nail-biting aspect of being a sole proprietor, he says, is staying calm when assignments (and therefore income patterns) ebb and flow. “I’ve learned to use the downtime and not to panic about it.”

When Porro turned 70 last year, he decided to scale back to about 20 hours a week. He’s still writing speeches from a co-working space at Metro Offices in Ballston, but he’s also doing more of what he enjoys most—screenwriting, playing tennis at the Arlington YMCA and studying Spanish at Washington-Lee High School through Arlington Community Learning.

When you freelance, retirement is a continuum, he says. “I’m used to setting my own schedule, I’m used to every day not being the same and I’m used to seeking out stuff that interests me.”