After helming The Partisan and Fire Works pizzeria, the Northern Virginia native is aiming to launch Harvey's this fall.

“If Cheers and the general store could have a baby, it would be Harvey’s,” chef Thomas Harvey says, summarizing the concept for his forthcoming Falls Church restaurant and bar.

The tagline: Harvey’s. Home to good food and friends.

The 2,600 square-foot eatery, set to open early September on Broad Street, is tucked into the retail level of the Byron residential building, close to Penzeys Spices and just down the street from grilled-cheese-and-craft-beer haven Spacebar. Occupying the former Plaka Grill space (Plaka has moved to a new location), Harvey’s will include a 12-seat bar, a 48-seat dining room, a food market and a large patio. The vibe will be decidedly relaxed.

“We’re shooting to be more of like the neighborhood hangout, the fun little weird place that when you have friends visit, [they’ll say they] haven’t seen a place like this before,” Harvey says of his first restaurant venture as owner.

The menu will be light on frills, heavy on comfort. Think breakfast sandwiches with scrambled eggs, sage sausage, cheddar and smoked tomato chutney or, for lunch, a cheesesteak with IPA beer cheese. The “toad in the hole on a stick”—a riff on a corndog that subs bratwurst and fried Yorkshire pudding for the standard frankfurter and breading—borrows a recipe from the chef’s grandmother’s handwritten cookbook.  The Russian honey cake on the dessert menu comes courtesy of Harvey’s spouse, Inna Grigoryeva, and her family’s recipe.

There will be lighter options, too, such as cedar-plank salmon with summer vegetable succotash and a chicken Cobb salad with local greens and radish. The beverage program will highlight local beer and wine, with five drafts on tap. “It’s casual and comforting, but the food is going to get just as much treatment as if you were sitting down in a fine-dining [establishment], but at a comfortable, everyday price,” says the chef, 39. 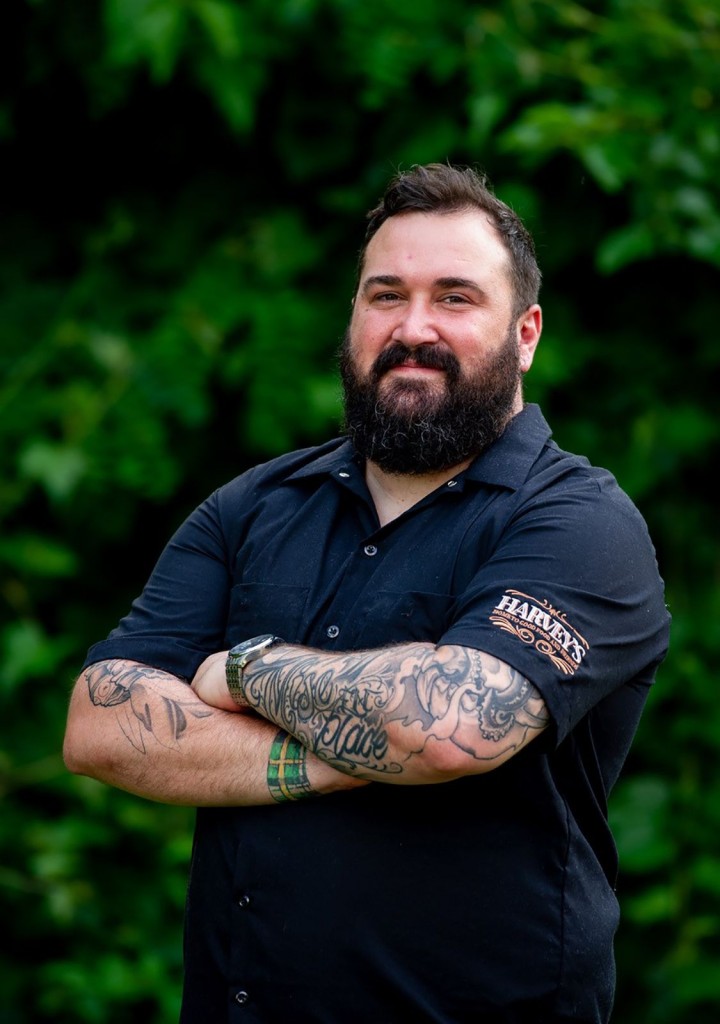 No stranger to commercial kitchens, Harvey has been cooking since he was 17, starting with summer jobs working the grills at golf courses. In college, he contemplated a career as a professional musician or tattoo artist, but later “realized that was not going to be the way that I went through life.”

He worked in a few restaurant kitchens and as a personal chef, and eventually pursued culinary training at L’Academie de Cuisine in Gaithersburg, Maryland, graduating in 2012.

“I decided it was time to go back to school and take the knowledge that I had and learn from great teachers,” he says. “Once I did that, I was able to really catapult my career and my cooking to other levels.”

After culinary school, Harvey worked under acclaimed chefs Frank Ruta (Palena) and Fabio Trabbochi (Sfoglina, Del Mar), served as executive chef at The Partisan in D.C., and spent four years as executive chef at Tuskie’s Restaurant Group, managing a bevy of brands that include Tuscarora Mill in Leesburg and Fire Works American Pizzeria and Bar in Arlington.

Working during the pandemic, he says, taught him to be flexible and versatile. “We always thought we were bullet-proof,” says the Alexandria resident. “This pandemic showed that restaurants have to be able to adapt. And I found that this is a concept where we can roll with the punches very easily.”

At Harvey’s, patrons will be able to order food using QR codes at the table—a system he describes as “modern counter service” minus the wait time of standing in line. The on-site market will stock fresh pastas, jarred sauces and other ready-to-go items for preparation at home. Open daily, the market will also carry plant-based proteins from Beyond Meat and local imports from regional farms like Sylvanaqua Farms and Seven Hills Food, suppliers Harvey relies on for the restaurant.

The interior design is still a work in progress, but one of its aesthetic highlights will be an original, 30-foot mural from D.C.-based artist Vitali Kalentsiyonak.

“It’s just a neighborhood, small-town feel. The ‘Little City’ moniker…perfectly sums it up,” he says. “It is such a local-supported, local-driven community. I think we’re going to fit in well because we are going to try to be as local as possible.”