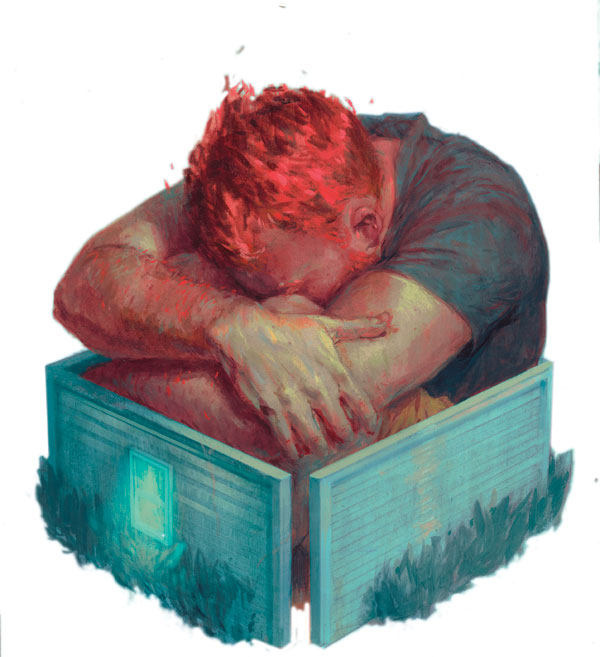 RESEARCH SUGGESTS that anxiety is hereditary and does tend to run in families, but it can also be triggered by environmental circumstances. “There usually needs to be a catalyzing event,” Ballenger says, whether it’s changing jobs, becoming a parent, or “something traumatic like combat, a car accident or the death of a loved one.”

Lyon Village resident Kara McCabe  comes from a long line of worriers (“If it were up to my dad, we’d all be wearing helmets 24/7,” she says). But her family also has been scarred by loss. McCabe was 16 when her older sister was killed by a drunk driver. By the time she reached her early 20s, she was having panic attacks.

“When my sister died at such a young age, it made me realize how easily things can happen,” McCabe says.

In the years that followed, those feelings of vulnerability became mani-fested in phobias that interfered with her everyday life. She began avoiding crowded places. She stressed about seemingly benign scenarios, like being able to find an open seat in a movie theater. And then she had kids.

“I never really understood the loss that my parents went through [with my sister’s death] until I had my first child,” says McCabe, now 45 and a mother of four. “It’s the unthinkable. No matter what you do to keep your kids safe, they’re still vulnerable. You could keep them in a box their whole lives, and then the box could cave in.”

Shortly after Sept. 11, 2001, McCabe developed a crippling fear of flying that persisted, despite assurances from therapists and her husband, an aeronautical engineer, that flying is one of the safest ways to travel.
“I don’t deal with statistics very well,” she explains. “I think I’ll be the one.”

McCabe finally resolved to confront her demons after realizing that her anxiety was stifling her kids—whether it meant vetoing vacations that involved air travel, avoiding water parks and wave pools (fear of drowning), nixing carnivals (potentially faulty rides that hadn’t kept up with inspections), or staying home on the Fourth of July rather than braving the crowds for fireworks.

“When anxiety starts changing your behavior and you don’t do fun things because you’re afraid of what can happen, you need to ask yourself, Am I really not going to do this because of my anxiety?,” McCabe says.

She has since learned to tamp down her negative thinking with cognitive behavioral therapy (more on that later) and medication. This summer, she flew with her family to Cape Cod, Massachusetts, for a vacation.