CULTURALLY, Northern Virginia does tend to feed the beast. “This area is a hotbed for anxiety, with our cultural and intellectual expectations for achievement and social status,” says McLean-based therapist Mimi Weisberg. People feel pressured to carry the big mortgage, pursue the high-powered career, maintain peak fitness, decorate the perfect home, volunteer for every school fundraiser and PTA activity, and raise perfect children, she says. 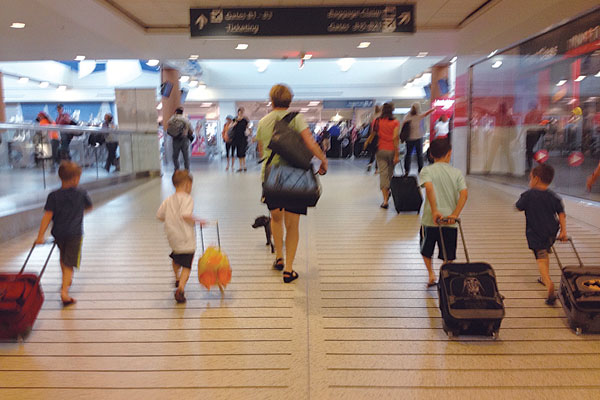 Kara McCabe has learned to manage her fear of flying for the sake of her kids.

Johanna Arenaza, an Arlington mom of two and clinical psychologist with a practice in D.C., says she sees this phenomenon daily: “In this area, we are all so capable. There’s a very high value on achievement and professional and academic success. We think that once we achieve that, we’ll be happy.”

The problem, she says, it that we have a tendency to delay happiness until we reach whatever goal we’ve set for ourselves. And that pattern of delayed gratification becomes an unreachable point on the horizon line.

“We think, I’ll be happy when I get to the next promotion or when I’m done raising my kids,” Arenaza says. “Then, even when we do achieve that goal, we discover we’re still not happy. We think that working more is the solution. It becomes a hamster wheel.”

What’s more, anxiety seldom travels alone. The condition often gives rise to a host of secondary problems, including alcoholism and other forms of substance abuse, obsessive exercising and eating disorders—all of which are flawed coping mechanisms.

“There’s a high degree of perfectionism in this area,” says Ioana Boie, an assistant professor of counseling at Marymount University who specializes in treating eating disorders. “Eating issues … become a way to self-medicate or a means of exerting control.”

Depression also tends to go hand-in-hand with anxiety, given that prolonged episodes of nervousness and unease are physically exhausting, leaving those who suffer from the condition feeling helpless.
Adam (not his real name), a married father in Falls Church, knew that he was supposed to feel proud and fulfilled each time he got a promotion or a new job. But as his family’s primary breadwinner, the

42-year-old says those milestones only compounded the sense that he was living in a pressure cooker. “With each job, my anxiety became harder and harder to control,” he says.
Even worse, his anxious feelings often manifested as anger. Finally, an incident brought everything to a head.

“My wife had given a bracelet to our 9-year-old daughter, and within a few hours, she had already lost it,” Adam recalls. “I started yelling at [my daughter] over this little bracelet, but it wasn’t about the bracelet. It was everything I was feeling: my life, my job and my own anxiety. I didn’t realize how badly I’d reacted until a couple days later when I asked my son to pick up the Legos that were all over his room. He looked up at me and whispered, ‘Sure, Dad,’ like he was afraid. I asked him what was going on, and he said, ‘Sometimes when you yell, I’m scared of you.’ It broke my heart that my own kid was scared of me.”

Now in therapy and taking anti-anxiety medication, Adam says he’s looking for ways to mitigate the stress in his life, starting with his career.

“I need to find something that I can do that doesn’t rob my soul that also allows me to take care of my family,” he says. “The fact that [anxiety] is hereditary makes me want to work on it even harder. I’m scared that my kids are going to go through this. If I can find ways to help my kids process their anxiety, at least I’ll have done something.”