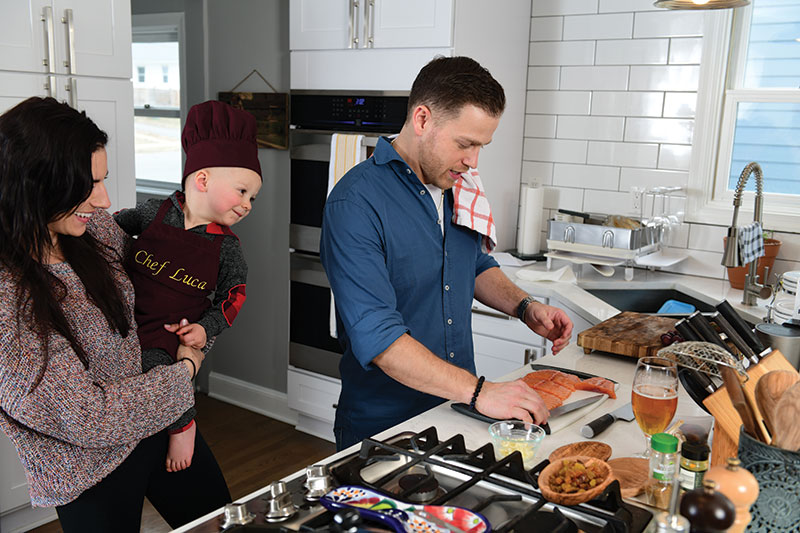 Jeremy Magnanelli tries to get to the gym three times a week, but with his crazy-long hours at Barley Mac in Rosslyn, and a 1-year-old son at home, his greatest fitness challenge is simply finding the time. “It’s not so much about the tasting of the food but more about the hours worked,” says the 37-year-old chef. “It’s tough to get out of the kitchen and exercise.”

During his precious hours off, he and his wife, Carolina, will sometimes take the baby for a long walk, or he’ll go for a jog in their Douglas Park neighborhood.

At home, the kitchen is the last place he wants to be, so simplicity is key for home-cooked meals. That means quick and satisfying sandwiches, Carolina’s killer taco salad, and grab-and-go snacks like baby carrots, celery sticks, bananas and his current addiction—Honeycrisp apples dipped in peanut butter for a protein kick. For breakfast, Magnanelli tries to start the day right with oatmeal or homemade granola with yogurt.

He says he steers clear of packaged granola bars, chips and processed deli meats. Cravings for pasta and eggplant parm are in his blood (he’s Italian), but he’ll sub in whole-wheat pasta to maximize fiber and minimize carbs. For rice dishes, he usually goes for a multigrain blend instead of plain white rice.

Current dining trends have prompted many chefs to rethink all the butter, oil and fat in favor of healthier techniques like slow-roasting and braising. Sure, Barley Mac’s menu includes a Southern-fried chicken sandwich and shrimp and grits, but there’s also healthier fare, he says—from seasonal salads to a slow-roasted chicken with sweet potatoes or the whole roasted branzino.

“It’s a big portion,” he says, “but you don’t have to eat the whole thing.” You can take some home for lunch the next day. 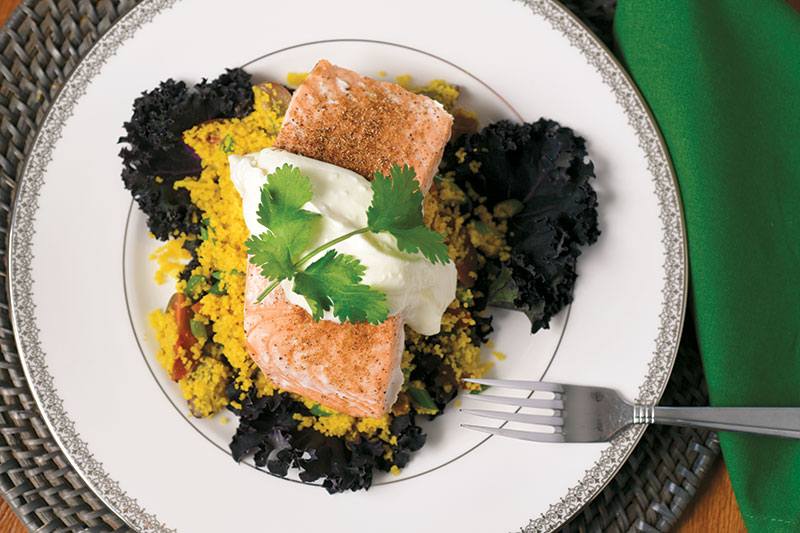 Preheat oven to 350 degrees. Pat the salmon dry with a napkin and let it sit at room temperature for 15-20 minutes. (Doing so before baking helps it cook more evenly.) Season with a pinch of salt and pepper, and, if desired, the cumin and chili powder. Place fish on a lightly oiled baking sheet. Bake 8-12 minutes for medium; or another 4 minutes for well-done. Remove from the oven and allow to rest for 5 minutes.

On high heat, bring the chicken stock to a boil. Whisk in the turmeric, cumin and garlic. Turn off the heat. In a medium-size bowl, add the dried couscous and golden raisins, then carefully pour the seasoned chicken stock over the couscous. Quickly give the couscous a fold or two with a spatula and cover with foil for 8 minutes.

Remove the foil and add the rest of the ingredients while warm (but not hot). Gently fold with a spatula to incorporate everything together. Serve warm or room temperature, topped with the baked salmon and a dollop of crème fraîche.

Rina Rapuano is a D.C.-based food and travel writer who loves testing new recipes—including the ones in this article. Find her on Instagram @rinacucina or Twitter @rinarap.