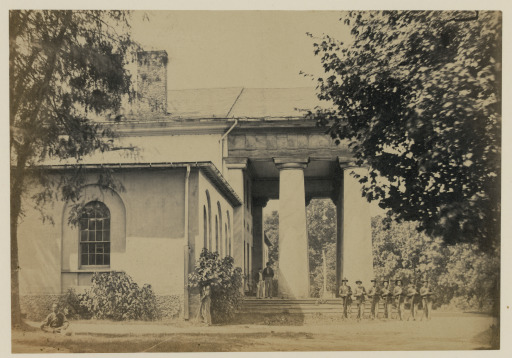 Many of us joke about present-day Arlington being a small town, but it’s nothing compared with the Arlington of the late-18th and early-19th centuries, when the local landscape was dominated by a tangled web of Lees, Masons, Washingtons, Custises and Fairfaxes.

During that time, life was starting to change for these affluent families. As the beneficiaries of extensive Colonial land holdings, many were accustomed to trading Virginia tobacco and other commodities to British merchants in exchange for luxury goods. But as the value of tobacco declined (while their taste for finery did not) their debt grew.

Land-rich, but cash-poor, Virginia’s elite soon found themselves stuck between the growth of Northern industry and the rise of profitable, slave-labor-intensive crops like cotton in the Deep South. “This was a period when a lot of wealthy people were treading water,” says Matt Penrod, a National Park Service ranger for the past two decades at Arlington House, the former Custis family estate that now presides over Arlington National Cemetery. “People had a lot of respect for them, but they were basically being left behind in the new economy.”

As a result, many local plantation owners began treating their land as a liquid asset. “Suddenly, land speculation was all the rage,” Penrod says. Just as they do today, members of the upper class gave pieces of property to relatives, sold parcels to developers for roads and used land as collateral in business deals.

“Someone was always bartering land, speculating in land, or buying and selling it back and forth,” says Andy Galusha, a Fairfax County project manager who is overseeing plans for a new park in McLean at Salona, a plantation once owned by Robert E. Lee’s father. “[Many landowners] had gambling issues,” he adds.

And some went bust. Founding Father George Mason’s fourth son, John, whose grand estate on Analostan Island (the retreat we now know as Roosevelt Island) was famous for its lavish parties, eventually lost the property to foreclosure and reportedly spent time in debtors’ prison.

Financial pressures also forced the sales of Ash Grove (a plantation owned by the Fairfax family) and Salona—both of which had been part of historic land grants—to Northern farmers.

Arlington House, built by George Washington Parke Custis (step-grandson and adoptive son of George Washington) in 1802, might have suffered the same fate had the Union Army not seized the property during the Civil War. Mary Anna Custis Lee (wife of Robert E. Lee), who lived in the house with her children at the start of the war, had inherited the estate upon her father’s death. But she also inherited his debt.

“[George Washington Parke Custis] was relatively wealthy and certainly part of the 1 percent, but he was at the bottom end,” Penrod explains. “His wealth shows at Arlington, but it also hides that fact that he didn’t have a lot of money. He had a lot of expenses. By the time Custis died, he owed the equivalent of $1 million today.”