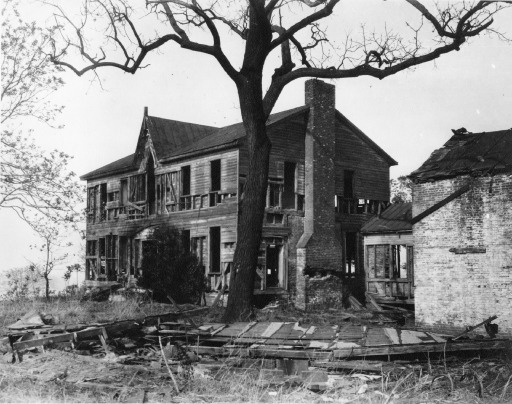 Abingdon Plantation (seen here in 1930, after the property was destroyed by fire) stood on the site now occupied by Reagan National Airport. Photo from Alexandria Library Special Collections

Now: This easily overlooked site on the grounds of Reagan National Airport is located between parking garages A and B, where preoccupied travelers roll their bags past the brick ruins of the house and its outdoor kitchen/laundry.

Then: Like so many other Early American properties, Abingdon Plantation began its life as a Colonial land grant. Bestowed upon a ship captain in the late 1600s, the 6,000-acre parcel was sold to John Alexander in 1669 in exchange for 6,000 pounds of tobacco. But it would be years until anyone lived on the property.

Gerard Alexander I (John’s grandson) finally built a house on the land in 1746, shortly before the city of Alexandria was established and named after his family. But the Alexanders weren’t the only notable residents of this property. It also briefly belonged to John Parke Custis, the son of Martha Custis Washington by her first marriage. Wanting to be closer to his mother and stepfather (George Washington) at Mount Vernon, Custis agreed to buy the land in 1778. He named it Abingdon and lived there with his wife and two children until his death in 1781. After John’s widow and her new husband left Abingdon in the early 1790s, the property again belonged to the Alexanders until 1807, when the land was put up for sale.