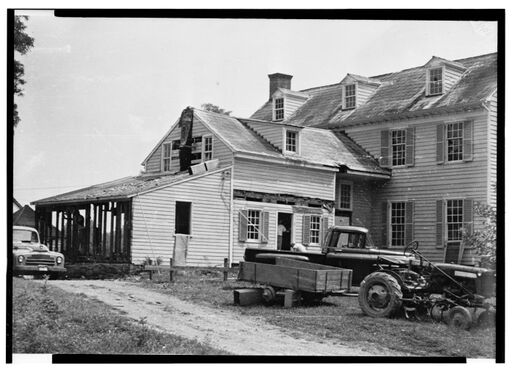 Ash Grove in the 1930s. Library of Congress photo.

Now: The original cream-colored, clapboard house (complete with an outdoor kitchen and meat house) is today surrounded by 20th-century brick town houses and condominiums. Owned by Fairfax County since 1997, it is one of the few surviving homes built by the Fairfax family, who, by some estimates, oversaw as much as 5 million acres of land in Colonial Virginia. The property sits about two miles west of Tysons Corner and less than a mile from the planned Tysons stop on Metro’s Silver Line.

Then: With so much land under their control, the Fairfaxes assigned different uses to their numerous holdings. Ash Grove was part of the 5,500-acre Towlston Grange plantation in Great Falls and was a spot that was initially reserved for hunting. In 1788, Ash Grove was deeded to Thomas Fairfax, then 26, by his father, Bryan Fairfax, a close friend of George Washington’s. Two years later, Thomas built the two-and-a-half-story house that remains today.

Educated and quirky, Thomas was full of ideas. He forged lightning rods for the roof of his home and invented a pulley-operated fan. But marriage and family were hard-won for him, despite his wealth and pedigree. His first two wives died within a year of their weddings. His third marriage, in 1800, brought him seven children. In 1833, Thomas gave Ash Grove and 4,000 acres to his son Henry, who lived there with his wife and, according to an 1835 newspaper article, opened a small school for girls.

After Henry’s death in 1847, Ash Grove was sold to the Shermans, a family from New York, who would own the property for the next 150 years. According to 1860 agricultural records, the Shermans ran a diversified farm on Ash Grove’s 241 acres, producing 500 pounds of butter, 150 pounds of honey, 55 tons of hay, 30 bushels of potatoes and 425 bushels of corn that year.