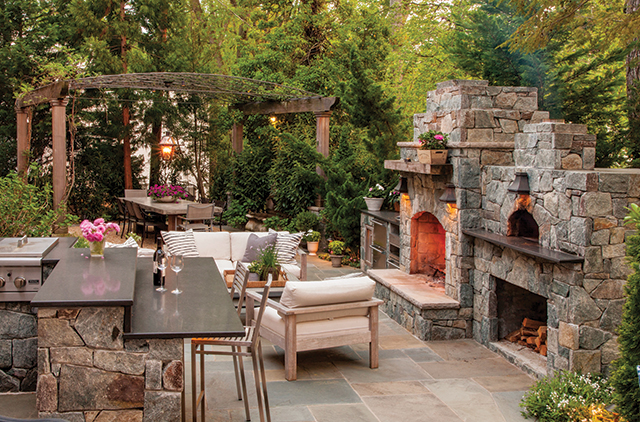 Amy and Karl Williams use their lush, European courtyard-inspired patio year-round for gatherings with friends, family dinners, cocktails at Thanksgiving and even to curl up by the fireplace with blankets on mild Christmas days. Yet, ironically, Amy says one of her favorite things about the outdoor space is how much she enjoys seeing it from inside their twice-renovated 1930s Aurora Hills home.

“I love how it looks when I’m in my house, because we have a lot of windows and doors,” she says. “I’m constantly using the stairs—and with all those windows, every time I look down, it’s just so pretty to look at.” 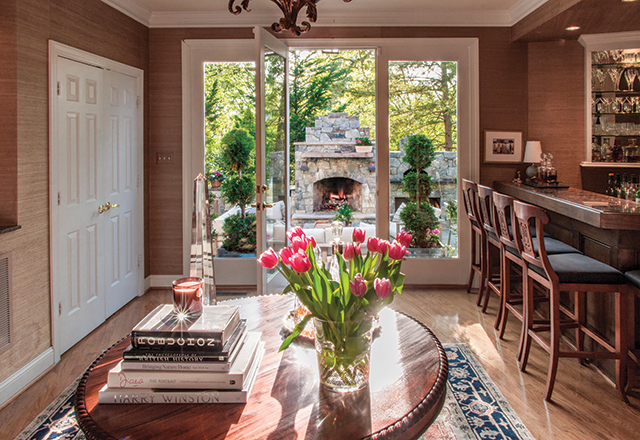 The patio space is accessible from four different rooms on the ground floor. Photo by George Brown

Her husband, a keen home cook, would probably say his favorite part of the upgraded space is the built-in pizza oven—or maybe the Kalamazoo grill, which Amy calls “the Ferrari of grills,” or the smoker that can be controlled with a cellphone, or the fact that the outdoor kitchen was designed to make sure Karl was never left out of the fun. 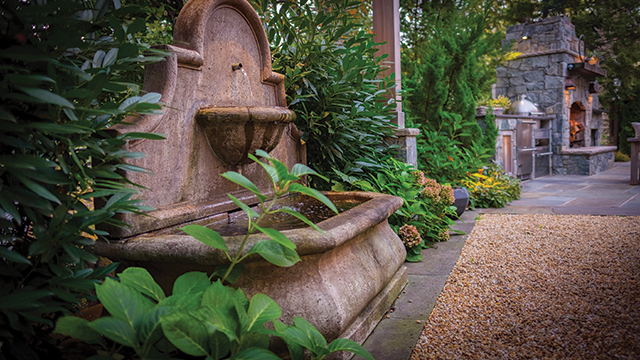 “While he’s cooking, he’s very much part of the entertainment space,” says landscape architect Susanne Fyffe, who designed the backyard oasis. “Everybody at the bar is drinking and talking, and you’re all interacting with ease, which was the point. I wanted to make sure the grill wasn’t off to the side, and he’s standing there by himself cooking. He’s right in the thick of things.”

As a longtime neighbor and one of Amy’s closest friends, Fyffe had her eye on the backyard for years before she got the opportunity to give it a makeover.

“They love to cook and entertain, and it was a very small, awkwardly shaped space,” she says. “They wanted it to feel like a little Italian garden and be able to entertain a lot of people and be cozy at the same time.”

To help create that vibe, Fyffe installed a fountain, a concrete dining table that seats 12 (and doubles as a pingpong table) and a pergola outfitted with a hanging lantern, plus what Fyffe calls “mini spotlights to put a glow on the table.”

Next to that is a lounge area in front of a stone fireplace and pizza hearth, complete with a nook for wood storage, Old World-inspired sconces, two refrigerator drawers, a smoker and a rustic wooden mantel.

On the dining terrace, Fyffe surrounded a bed of gravel with a band of bluestone, giving the effect of a rug. For plantings, she chose skip laurels, emerald-green arborvitae and Chindo viburnum to provide screening for the couple’s mostly shady yard, along with plenty of hydrangeas. Amy says she and Karl both love gardening, too, so at least that part of the upkeep is fun.

“Our neighborhood is super, super tight, and we have tons of friends, and we have been able to use it for get-togethers during Covid,” says Amy. “It feels like you’re not in Arlington. It could feel European, or it could even feel like California.”