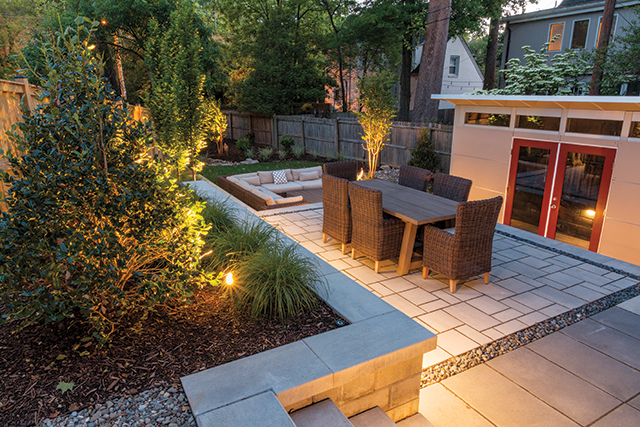 What was once an empty grass lot is now a tiered backyard retreat with water-tolerant landscaping and defined areas for dining and lounging. Photo by George Brown

All backyard renovations run into a few snags here and there, but some turn out to be far more challenging than others. For Lyon Village residents Josh Luszcz and his wife, Rebecca Pomarzynski, plans for a dream backyard were stymied when much of their budget ended up being diverted to deal with water issues.

“They were the lowest point in the neighborhood, so they were not only getting all of their own roof water, driveway water, etcetera, but all of the neighbors’ water was running off into their property,” says landscape designer Rob Groff, whose firm is based in Clarendon. “They basically had a swamp in the backyard. They could have done everything they wanted to do if it wasn’t for that.” 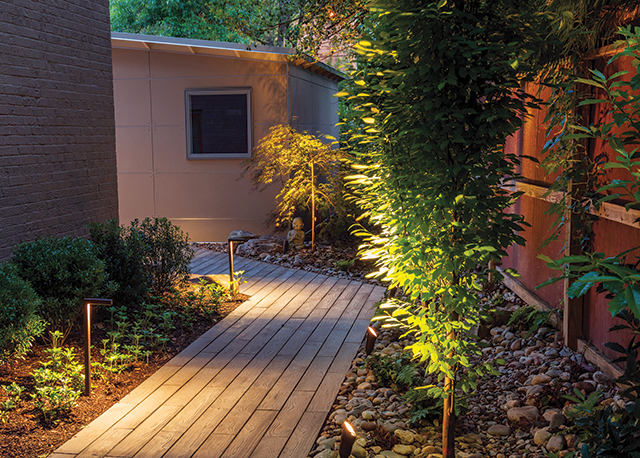 Techo-Bloc concrete walkways connect the home’s exterior side doors to the backyard. Photo by George Brown

To mitigate the moisture, Groff’s team sunk permeable pipes into the ground to collect extra water from roof and patio runoff. The pipes are surrounded by gravel and topped with rock beds, which allows water to sit below the surface until it’s absorbed by the soil. Retaining walls, built to create flat terraces, also hide drainage fixes.

Given the constraints posed by the waterlogged site, the owners made some compromises to stay within budget.

“We left out a couple things that would [have made] the space more complete, like the fireplace and the pergola over the dining area,” says Luszcz, who bought the newly built home with Pomarzynski in 2018. They opted for concrete pavers (some of them designed to look like boardwalk planks) in lieu of more costly stone, and downsized the trees and shrubs, understanding that more mature plants come with heftier price tags.

“We don’t quite have the privacy we were envisioning because we have to let the plants grow,” Luszcz says.
Groff selected native plants wherever possible, such as inkberry holly and river birch, both known for performing well in wet conditions. 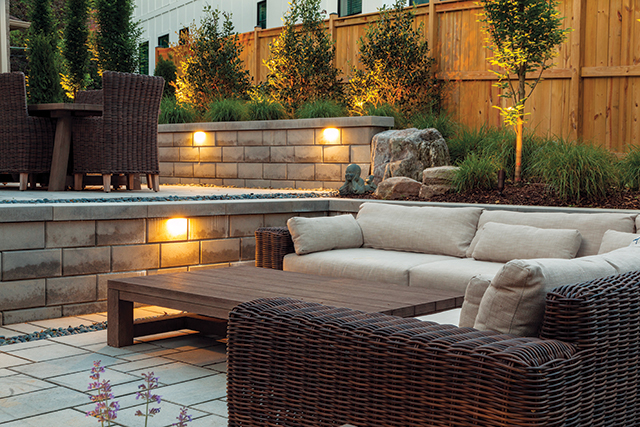 Built-in lighting has an enchanting effect in the evening hours. Photo by George Brown

Water management wasn’t the only site challenge. The property’s triangle-shaped lot made the design solutions more limited, Groff says, as did municipal guidelines that restricted the small yard’s buildable space. Add to that an abundance of shady areas (which dry out slower than sunny ones) and the fact that the home has no back door; the only ways to access the backyard from the house are from doorways on either side.

“Normally, you’ve got this kitchen-to-patio connection, where you’re cooking, you’ve got a platter of food and you take it out to everyone. So that was definitely an obstacle,” says Groff. “We created these walkways on both sides of the house to make it as convenient as possible.”

Despite the challenges, Groff is pleased with the result. “This is probably one of the most complicated Arlington projects that we’ve ever worked on,” he says. “I think, at the end of the day, we turned a negative into a positive.”

Luszcz still considers the backyard a work in progress. He has his heart set on one day adding an outdoor fireplace, but for now is glad they got the detached storage shed they needed—a modern, prefabricated structure with bold red doors that he installed atop a foundation laid by Groff’s company.

Overall, he says he is extremely happy with Groff’s work. He loves the look of it, and the lighting in particular. “It looks really fantastic at night.”

Rina Rapuano is a freelance writer based in Washington, D.C., where she spends a good deal of time dreaming about someday having a backyard as lovely as these. Find her online at rinarapuano.com, on Instagram at @rinacucina and on Twitter at @rinarap.