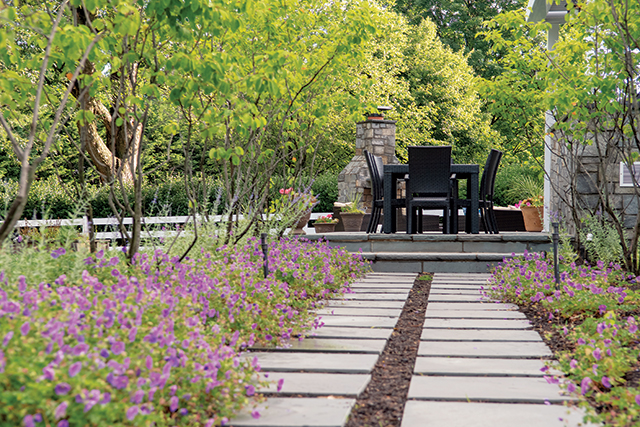 When a couple likes to garden and cook as much as Hunt and Alison Shipman do, it’s only natural that they start dreaming of a backyard retreat. In 2016, with one daughter in college and two high-school-age kids at home, the Shipmans were finally ready to add an outdoor kitchen, a loungy fireplace area and a tree-lined walkway to the rear of their Falls Church home. They settled on working with Arlington-based landscape architect Jennifer Horn and had zero regrets.

“She has good ideas, she listened to us, and I think she had a way to share her experience,” says Hunt, “that didn’t feel like she was pushing us to do one thing or not do something. But we got there on our own, anyway.”
For instance, the Shipmans came into the project thinking they wanted some sort of hot tub, splash pool or plunge pool. After meeting with Horn a few times, they realized they would be better off without it—a decision they now know was the right one because of cost and maintenance. 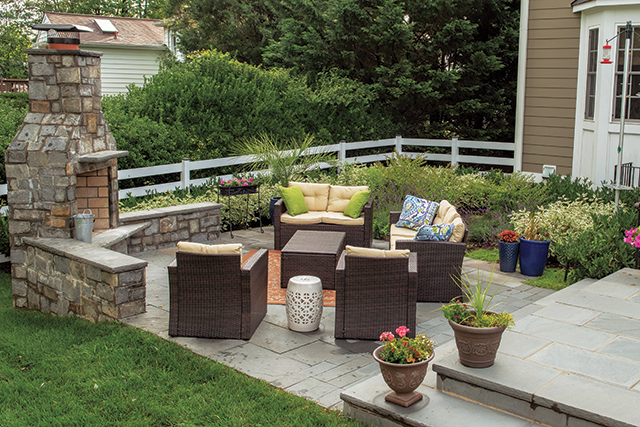 The dining terrace steps down to a fireside lounge. Photo by Thomas Walker

To fully capture everything else on their wish list, Horn created a large deck outfitted with a grill, a built-in Big Green Egg smoker, a searing station and a louvered pergola overhead so that the cooking and entertaining doesn’t have to stop if a light rain rolls in. That outdoor culinary zone gets used year-round.

“I’m the usual cook, and Hunt’s the weekend cook,” Alison says. “He likes the projects, and I like the 30-minute meal kinds of things.”

Horn used bluestone pavers to build the dining and fireplace areas, and to line walkways. Native serviceberry trees—a pollinator favorite—create an allée that guides guests from the driveway around to the back of the house. That pretty lined path has since morphed into a favorite family spot for photos on special occasions like homecoming, prom and graduation.

“You know, ultimately it was a pathway to get from the front yard to the backyard,” says Horn, “but it’s become something more like a family tradition for pictures now, which is really sweet.” 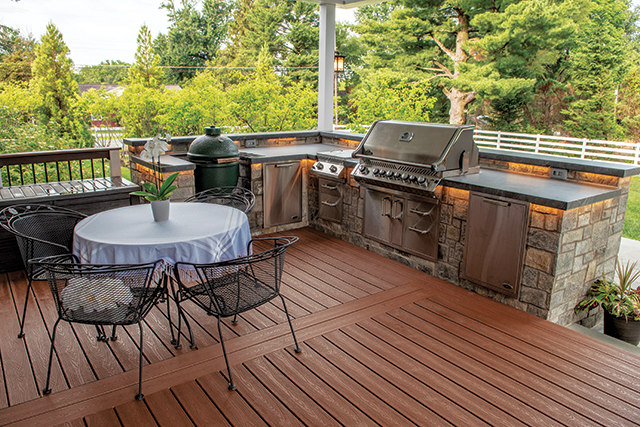 For the outdoor kitchen, Horn kept an existing Trex composite deck, using stonework to integrate the deck and patio. Photo by Thomas Walker

Since Hunt is an avid gardener, the yard already featured plantings and raised garden beds. To complement the existing landscaping, Horn added aromatics around the patio, and was able to transplant some flowers and shrubs she had removed during a revamp of the front yard. “They were definitely interested in herbs and having edible plants when possible, so we did use some rosemary, even Russian sage and lavender,” Horn says.

Careful consideration was given to the landscaping by the fireplace. “We used red twig dogwood there,” she explains, “because we know that the red stems on that bush are very pretty in the winter when you might be sitting out by the fire.”

In recent months, the Shipmans were especially grateful for their luxe backyard; it allowed them to safely entertain Alison’s parents and sisters, who live nearby.

“I like that it’s versatile,” Alison says. “There are kind of three separate spaces, so depending on how we’re entertaining, we can use either the lower patio by the fireplace, or the upper patio for drinks with friends—and obviously the kitchen area gets used year-round. Hunt loves the outdoor kitchen, and I think I love all of it.”