Craving a slice? Luckily, there’s no shortage of pizza shops in town. 🍕 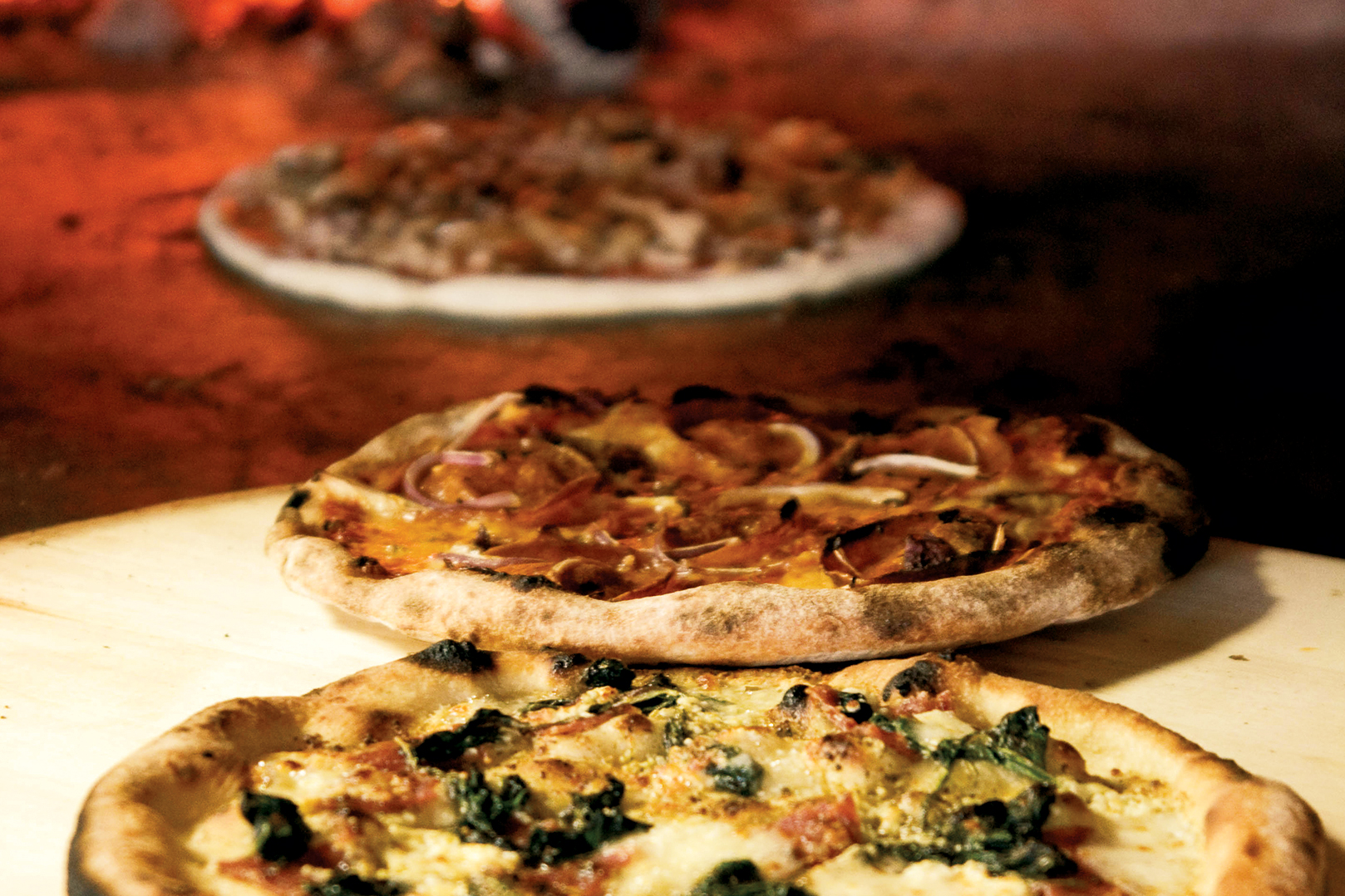 Few topics, save for politics and sports, inspire the kinds of arguments that pizza does. Transplants from New York swear by folding a thin-crust slice in half; Midwest natives insist that deep-dish pies stuffed with cheese are the way to go; and for converts who’ve discovered Neapolitan-style, there’s often no turning back. Fortunately, the Arlington area offers seemingly endless options from pizza masters who take their craft seriously.

Here are several pizza places we’ve deemed worthy of a visit. Give them a taste. And then fight about it.

Flexibility is the name of the game at Fire Works, which also has locations in Leesburg and Sterling. Gluten-free crust? Check. Half mushrooms and olives, half pepperoni? Sure thing. A good recommendation, nevertheless, is the vegetarian Harvester with pesto, smoked mozzarella, red onions, mushrooms, artichokes and marinated tomatoes ($14 for a 10-inch pie, $21 for a 16-inch). The pesto gives it such depth that habitual carnivores won’t even miss the sausage or pepperoni. Meat and vegetables here are locally sourced, and the dough is made from a levain (similar to sourdough) starter. // 2350 Clarendon Blvd., Arlington (Courthouse)

A simple slice of cheese pizza at Andy’s Pizza has quite the pedigree. In 2001, owner Andy Brown entered his New York-style cheese pizza ($3.99 for a slice)—the same one sold at Andy’s Pizza locations throughout the area—into a competition at the International Pizza Expo in Las Vegas, and beat out 90 competitors for the gold medal. Not a mozzarella cheese pizza purist? Try a pie with toppings such as burrata or whipped ricotta, or even melty vegan cheese from D.C. company Vertage. There is one caveat to experiencing Andy’s award-winning pizza: Brown says to dine in or carry out—not delivery—for the closest experience to the International Pizza Expo. // Tysons Galleria, 2001 International Dr., McLean

Toppings are piled high on Badd Pizza’s pies, and the most important of them all is the cup-and-char-style pepperoni; when cooked, the pieces of pepperoni curl up to form little oven-kissed cups filled with grease. Badd Pizza owner Joel Salamone, a Buffalo native, missed the pizza of his hometown so much that ​​he asked Steven Houck, a.k.a. “Stevie Badd,” to share his recipes from a career spent slinging pizzas and wings in Western New York. Naturally, an order of crispy chicken wings ($14.99 for 10) is a no-brainer to add to your pizza order. // 346 W. Broad St., Falls Church City; 6263 Old Dominion Dr., McLean 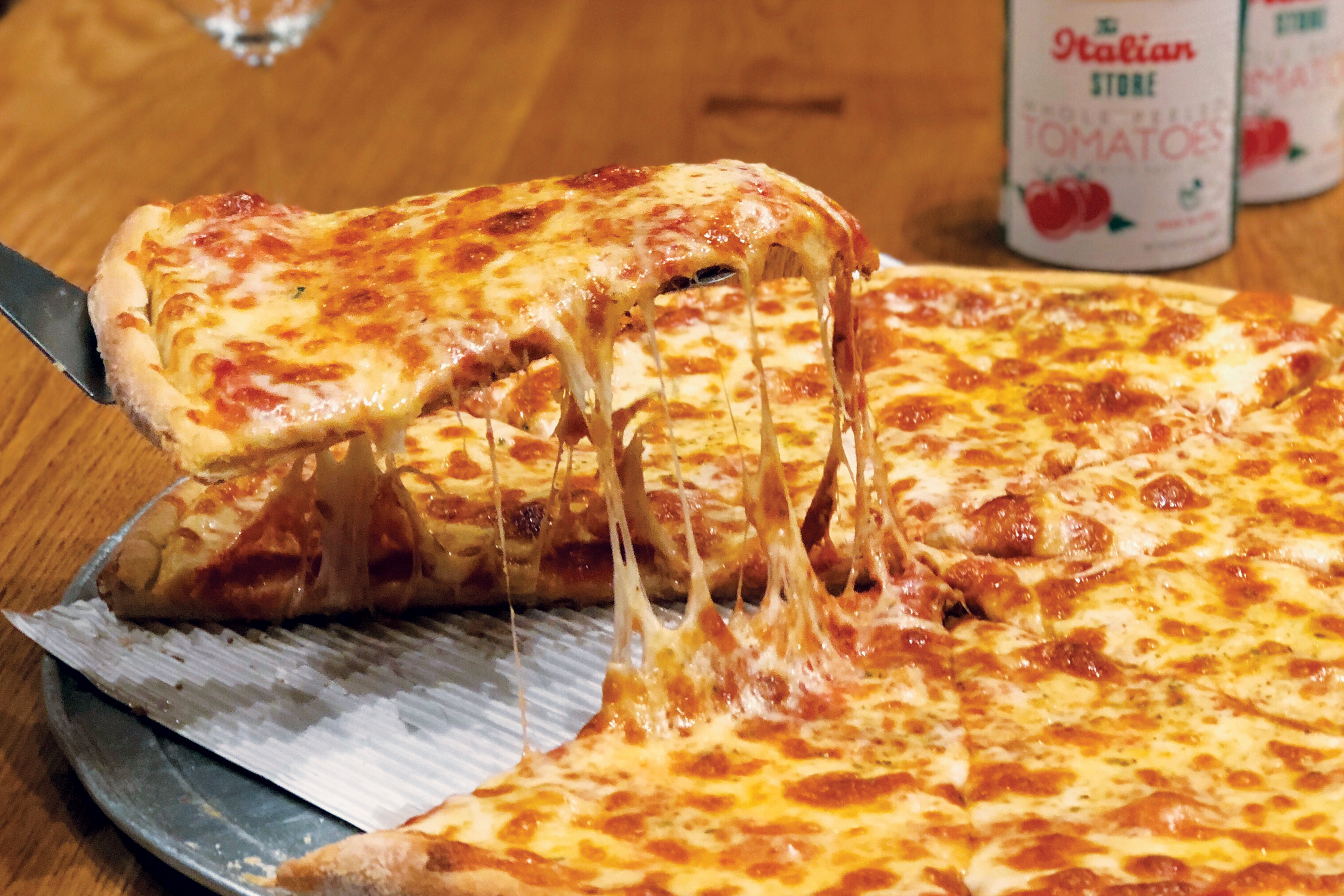 This Arlington go-to offers New York-style pizza with a twist—less sauce, cheese and oil, which negates the need to fold slices in half to prevent the toppings from slipping off. Grab a seat at a high-top table to watch pizzas come out of the gas-fired oven while you contemplate adding a bag of imported pasta or salami from the on-site market to your order. A good bet is the Nino’s Pizza with white garlic sauce, ricotta, mozzarella and spinach ($22.99 for a 16-inch pie, $24.99 for a 20-inch pie). Mike Tramonte, The Italian Store’s director of operations (his dad, Robert, is the owner), says employees “squish and squeeze all the moisture out of the spinach, so when it cooks up, it’s nice and crunchy.” // 3123 Langston Blvd., Arlington (Lyon Village); 5837 Washington Blvd., Arlington (Westover)

Colony Grill’s name is deceiving, since the only food item you can order at this friendly tavern in Arlington is pizza—a 12-inch pie, cut into six slices, with the toppings of your choice (we recommend the signature “hot oil” topping). Even salad and breakfast come served on a pizza crust here. The first Colony Grill opened in an Irish immigrant neighborhood in Stamford, Connecticut nearly 90 years ago, and the pies here, which descend from a Great Depression-era recipe, are whippet-thin, with an equally judicious coating of sauce and cheese. // 2800 Clarendon Blvd., Arlington (Clarendon) 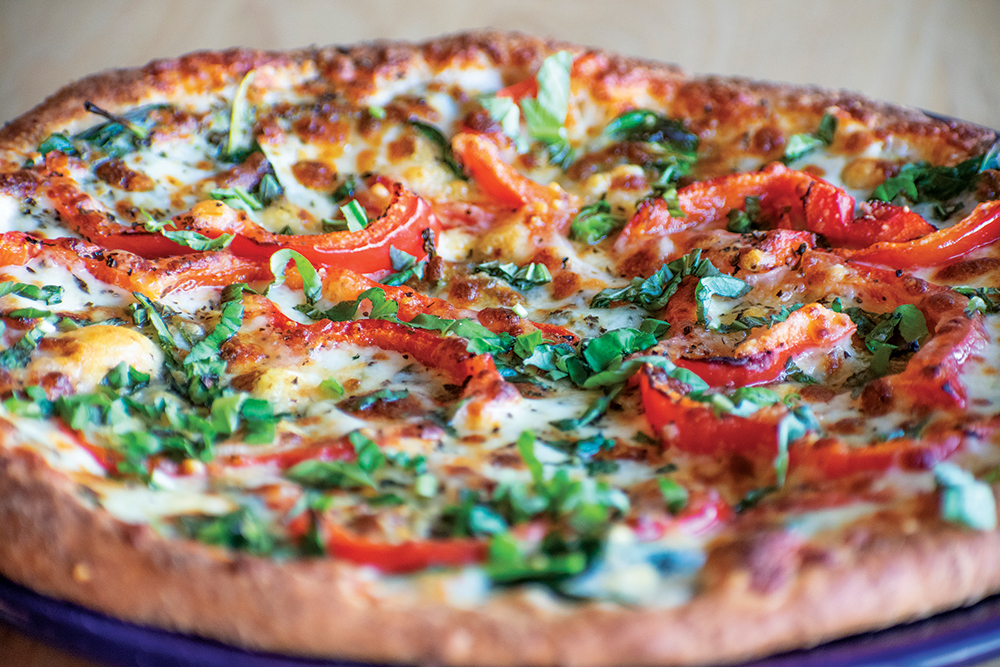 Well known for its sandwiches and salads, this local institution boasts an impressive pizza menu, as well. Offerings reinforce the dog-friendly restaurant’s name: There’s the aptly named Pit Bull Pie, whose ingredients include pepperoni, salami and pastrami topped with zesty sauce and jalapeños ($17.95 for a 12-inch pie, $21.95 for a 16-inch); and the Mountain Cur, a meat-lover’s dream with pepperoni, sausage, ham and bacon smothered with mozzarella cheese and the unusual (but it totally works) addition of pulled pork ($17.95 for a 12-inch pie, $21.95 for a 16-inch). Employees make fresh dough daily, and servers treat customers like old friends. // 5876 Washington Blvd., Arlington (Westover); 2920 Columbia Pike, Arlington (Columbia Pike); 1690-A Anderson Rd., McLean

The Village at Shirlington is now home to a branch of D.C. favorite Stellina Pizzeria, the brainchild of two Italians. Co-owners Matteo Venini and Antonio Matarazzo came up with the concept of 12-inch “neo-Neapolitan” pizzas that riff on traditional styles, churning out a pie with a slightly crunchier crust and inspired toppings. Think: Cacio & pepe pizza channeling the famous pasta dish ($16), or the “Affumicata,” covered with smoked pecorino crema, figs, smoked mozzarella, smoked cherry tomatoes, mozzarella and speck ($17). Stellina is opening up two new locations this year—one in Mount Vernon in D.C. this spring, and another in Tysons this fall.  // 2800 S. Randolph St., Ste. 130, Arlington (Shirlington); Coming in the fall: 1610 Capital One Dr., Tysons 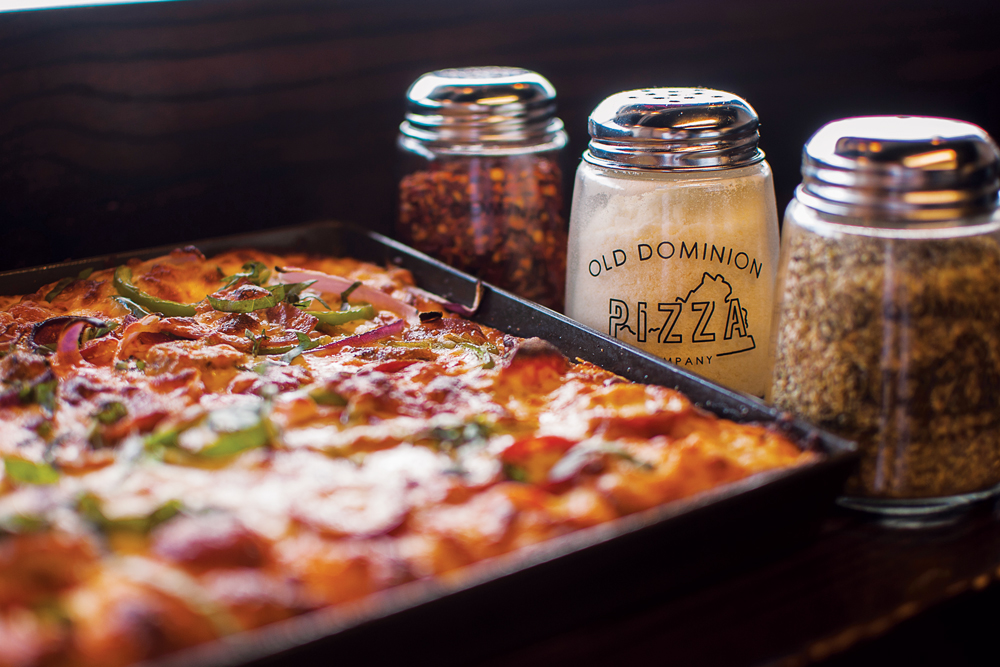 If you like an unpretentious neighborhood eatery that sells pizza in Arlington by the slice and pies named after local high-school sports teams, Old Dominion delivers. This shop turns out traditional New York-style ’za, as well as rectangular “grandma-style” pies. The latter are baked in a one-inch pan with olive oil and cornmeal for a crust that’s slightly thicker and crunchier but “not as heavy and dense as Sicilian style,” according to co-owner John Rodas, who opened the shop in January 2019 with chef Charles Smith. For a sweet-salt-spicy kick, try The Patriot, with pepperoni, oregano and Mike’s Hot Honey ($14 for a 12-inch pie, $18 for a 16-inch pie, and $16 for a grandma-style pie or a cauliflower crust). Gluten-free cauliflower crust is also available. // 4514 Langston Blvd., Arlington (Old Dominion)

A pizza trailer turned into a full-fledged restaurant for chef Tom Cardarelli, who started Stracci Pizza out of a parking lot in Del Ray in 2021. His rectangular, Roman-style pizzas are made with an airy and crisp sourdough crust, and topped with cream-soaked stracciatella cheese made in house. Needless to say, the neighborhood embraced Stracci Pizza, which has since added cozy indoor dining in the building adjacent to its trailer. Pizzas topped with artichokes or Sicilian anchovies are the main event, but there are also starters such as chicken liver mousse ($7), and desserts such as olive oil cake with fennel pollen and whipped cream ($8). // 106 Hume Ave., Alexandria (Del Ray) 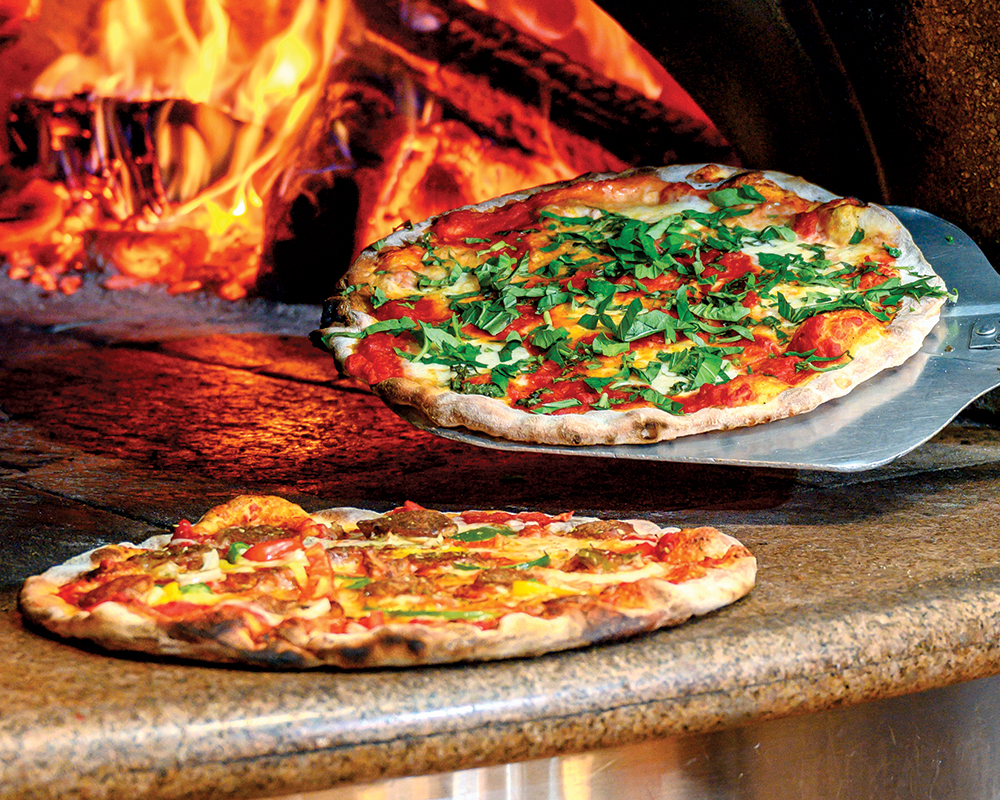 Eusebio Nolasco has been making Pie-tanza’s dough by hand for nearly 17 years. (Photo by Adam Freedman)

Co-owner Ed McKee has thought a lot about the ideal pie: “It isn’t doughy and gooey and overloaded with cheese; it’s more in balance, so there’s not too much of anything on it.” His kitchen also cooks its thin-crust pizzas differently from the norm. Each pie goes in front of the fire at the beginning, so it immediately starts to brown; then it’s moved to the back of the oven to finish cooking, to guarantee that the crust won’t burn at the last minute. “We felt it was gentler on the dough,” McKee says. There’s a consistency to the main attraction here, he adds, given that the same employee, Eusebio Nolasco, has been making the dough by hand—not with a mixer—for nearly 17 years. Loyal followers keep coming back for offerings such as the balsamic-drizzled goat cheese and arugula pie with prosciutto and pear ($13.99). // 2503 N. Harrison St., Arlington (Yorktown)

Timber Pizza Co. in D.C.’s Petworth neighborhood always had plenty of cool points and critical raves (find it on the most recent list of Michelin Bib Gourmand restaurants). In 2019, the team behind Timber Pizza set up a wood-fired oven in Ballston Quarter Market for a spin-off called Turu’s. The pies at the Ballston food hall are still “Neopolitan-ish,” but with a New York twist—and they are a bit larger than the pies served at the original location, hence the “big pies, big vibes” tagline. The concise menu features cross-over from both locations, such as the pesto-slathered Green Monster with kale and zucchini ($12). Pineapple pizza fans will make a beeline to the La Chula, topped with jalapeno, chicken sausage and a spicy apple drizzle in addition to pineapple ($13). // 4238 Wilson Blvd., Arlington (Ballston) 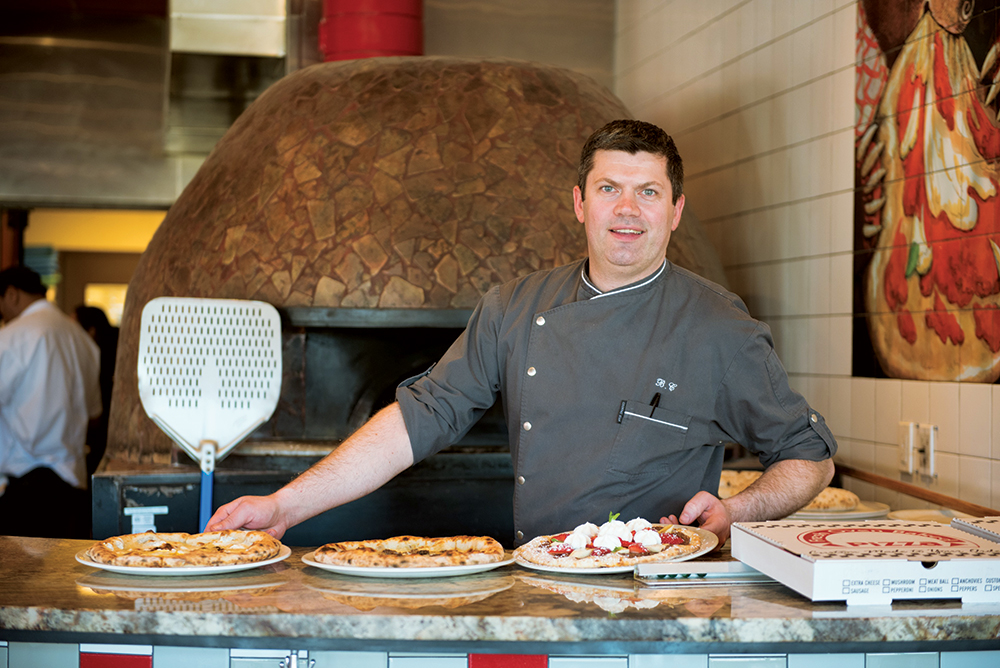 This is not your childhood takeout joint. As soon as you sit down, a server brings an amuse-bouche of piccolo fritto—a small nugget of lightly fried pizza dough drizzled with olive oil and sprinkled with sea salt, Parmesan and chives. Original artwork and sculptural lights evoke the aesthetic touches of Pizzeria Orso’s sister restaurant, the elegant 2941, whose chef, Bertrand Chemel, has put the same care into the food here. The pizza is VPN (Vera Pizza Napoletana)-certified, an Italian government-recognized designation for restaurants that adhere to the traditional Neapolitan method and use specific ingredients, such as real buffalo mozzarella and San Marzano tomatoes. Pizzas such as the classic Margherita ($14)—with whole basil leaves, rather than thin strips, to impart more flavor—are cooked in an Italian wood-fired oven made of volcanic rock from Mount Vesuvius. // 400 S. Maple Ave., Falls Church City 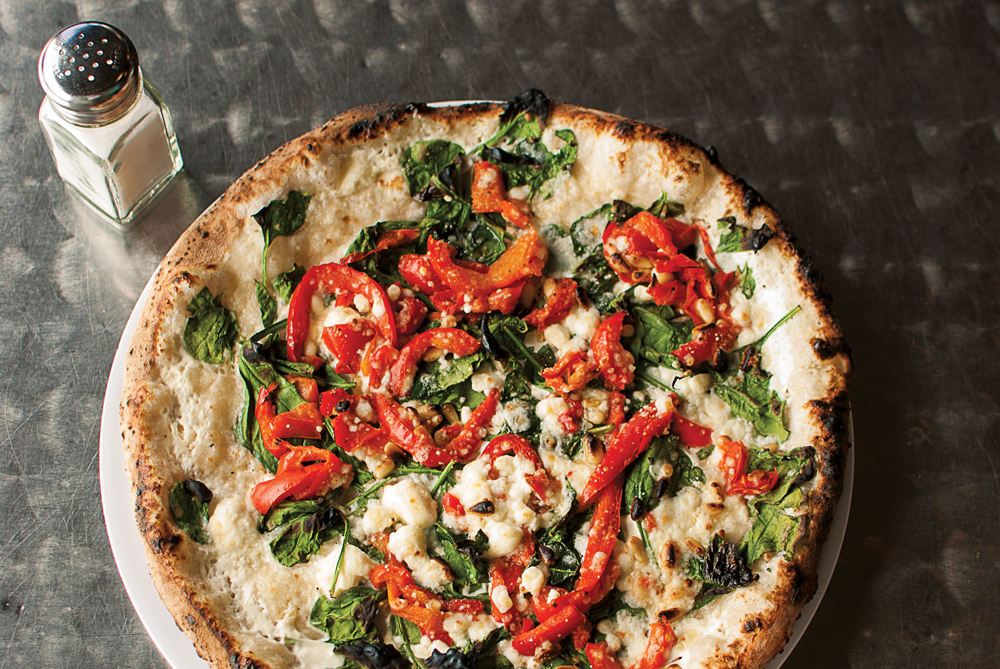 Once you sit down at this Arlington pizza favorite, you’ll be rewarded with VPN-certified pies that are the real deal. (Owner Enzo Algarme was born and raised in Naples.) Pupatella’s oven heats up to between 800 and 1,000 degrees, and the pizzas have a perfectly charred—but not burned—crust that remains soft and chewy inside. Order a classic, such as the ham and mushroom pie ($13); the funghi lend an earthy complement to the tender, salty ham, and the mozzarella is creamy, never soggy. The kids’ pizza, called the Bimbi ($10.95), is enough for two small humans to share. Pupatella’s has come far since its humble beginnings as a food truck; there are now two locations in Arlington and an outpost in Reston. Additionally, the pizzeria expanded to D.C. in 2020 with a Dupont shop. // 5104 Wilson Blvd., Arlington (Bluemont); 1621 S. Walter Reed Dr., Arlington (Columbia Pike)

Nuri Erol started this local chain with a goal of filling what he saw as void in D.C. for foldable, NYC-style slices. The toppings at Wiseguy, however, go way beyond the average slice of cheese or pepperoni. Just look at the menu, where diners can choose between chicken paneer with masala and a combination of mozzarella and paneer cheese ($26.49); Korean crispy chicken with sesame aioli ($26.49); and a Nashville hot chicken dotted with ranch sauce and cabbage ($26.49). All those pizzas cook in 550-degree ovens directly on stone, so the dough gets chewy and lightly charred. Feeding a crowd? Call an hour ahead to snag a whole pie. // 1735 N. Lynn St., Arlington (Rosslyn); 710 12th St. South, Arlington (National Landing) 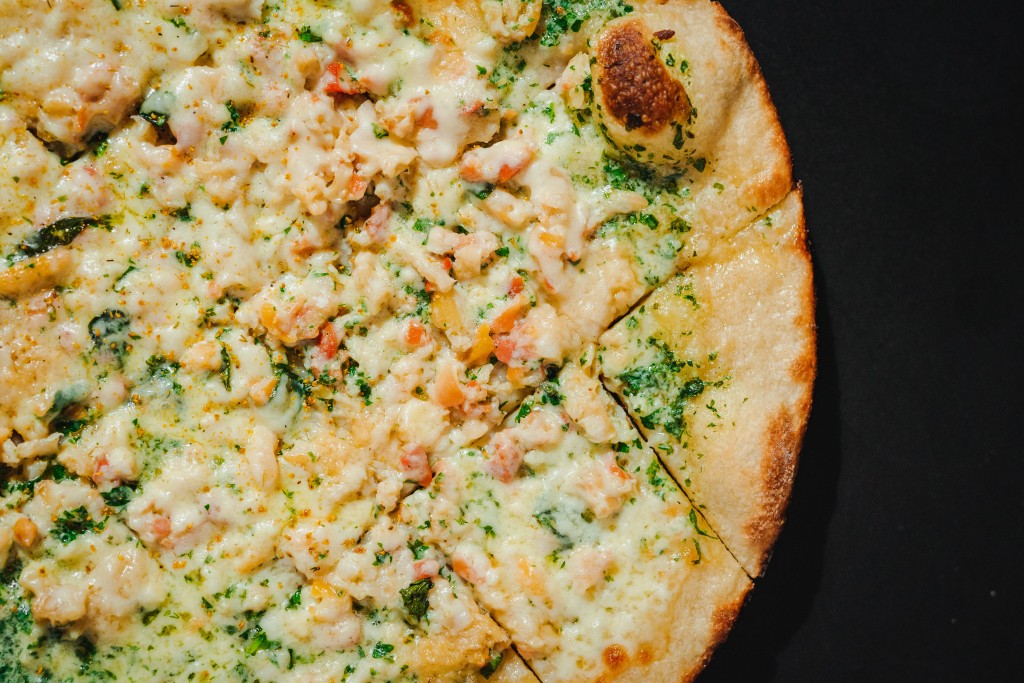 Nighthawk Serves Up Pizza and Beer with 90s Flair 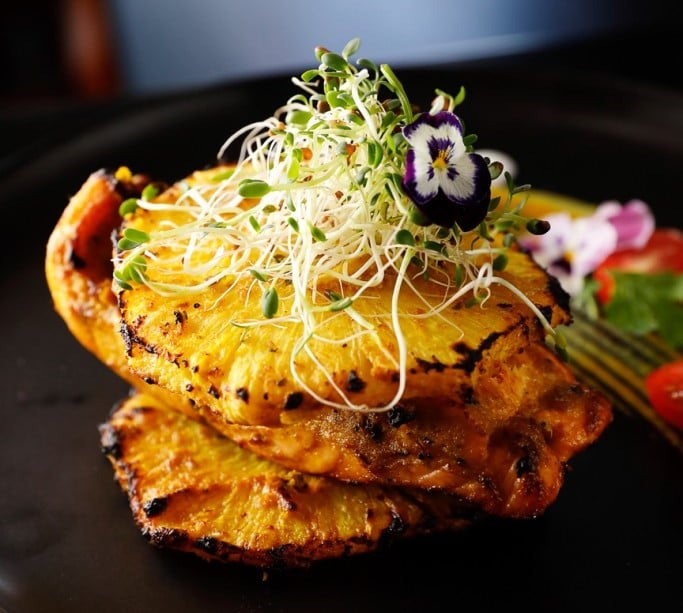 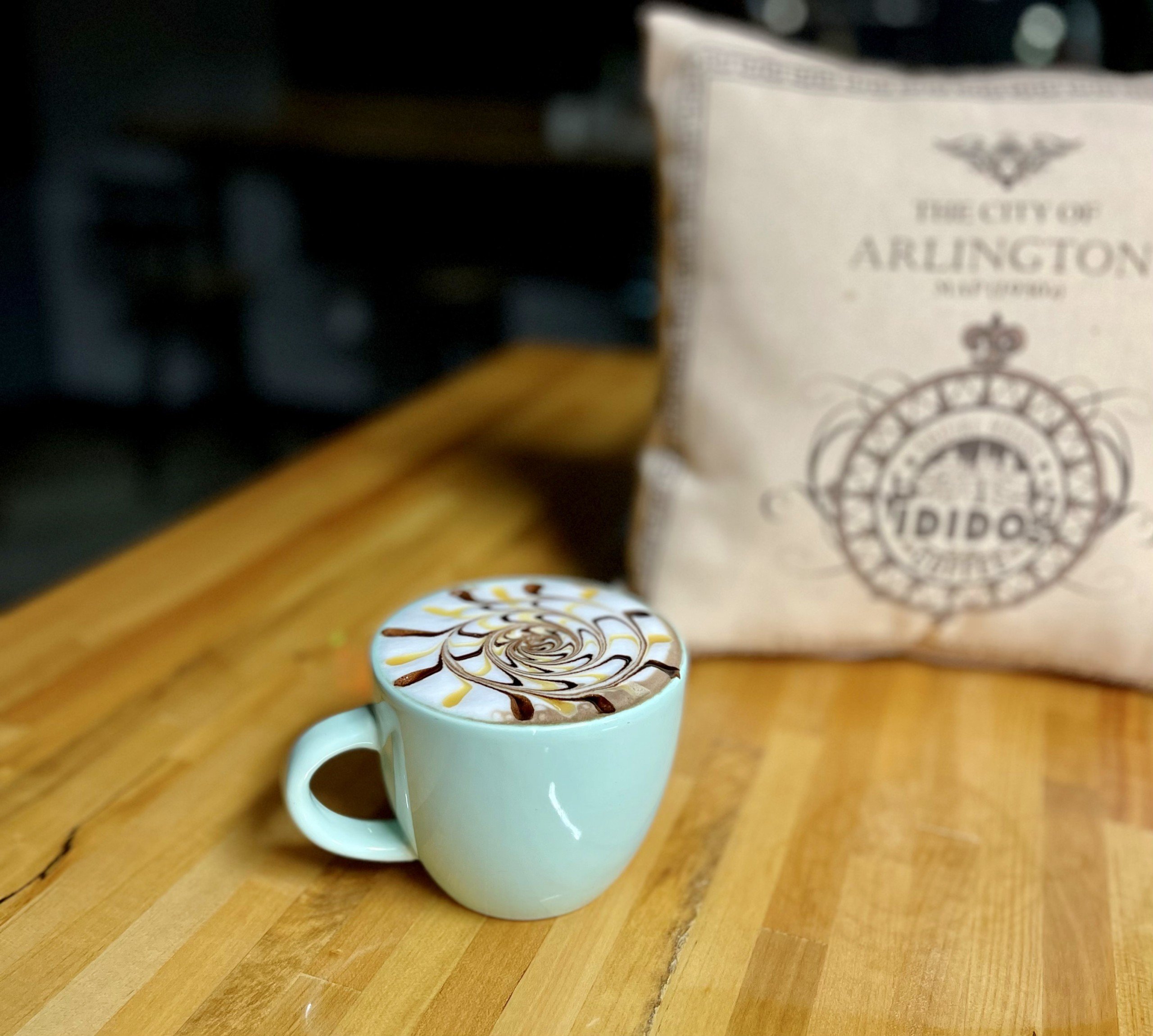 Where to Find Great Hot Chocolate in Arlington