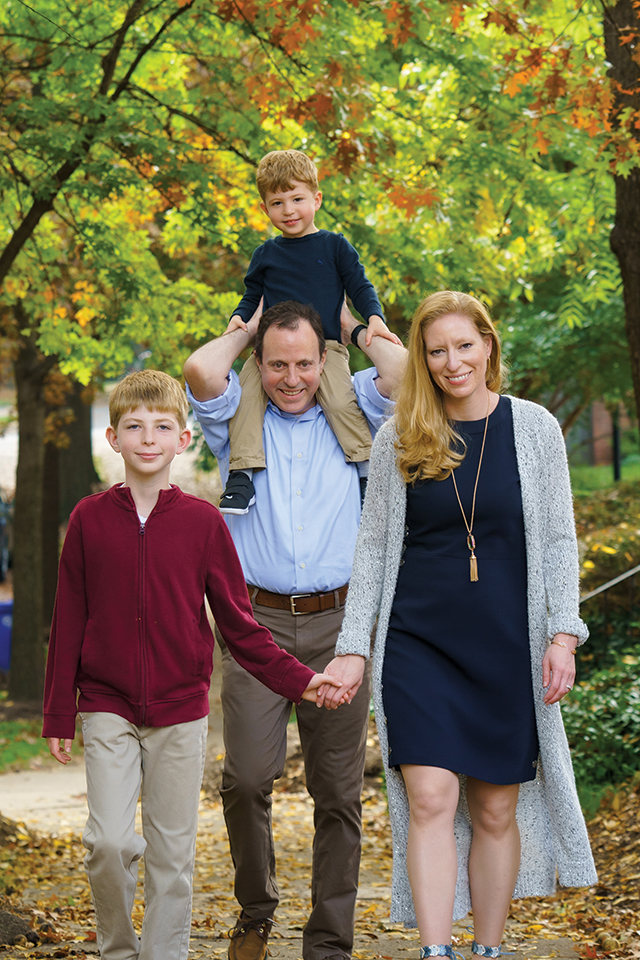 Bethel with her husband, Sean, and sons Connor and Liam. Photo by Matt Mendelsohn

When Rachel left for high school, Bethel was alone in middle school and had to fight for herself—quite literally. One day she struck back against a longtime bully, kicking the boy hard enough to drop him to the ground. He never bothered her again. (He would later tell her he respected her for standing up to him.)

Suddenly, other kids saw her as spunky. The incident opened the door to making friends.

She continued to find refuge in her art, too. She was in high school at Hayfield Secondary School in Alexandria when one of her art teachers taught her to draw using an unlikely tool.

“I would look at a still life close up through a telescope and I would draw it,” Bethel says. “It made my art more interesting. Things looked a little different when I painted them, but you could still tell it was a banana or a flower. I started expressing myself through color. It wasn’t so much the color I saw but rather the color I felt.”

Her first year of college, however, was a disaster. At James Madison University, where Bethel was accepted on a portfolio scholarship, accommodations for blind students 20 years ago were slim to none, she says, and she felt like an “artsy weird person” in a sea of preppy.

Technology also wasn’t what it is today. Bethel struggled to follow lectures using overhead projections she couldn’t see. She made few friends (though she did meet her future husband, Sean) and stopped dancing. She lost interest in food and dropped to 90 pounds.

“It was the one time in my life I really gave up,” she says. “I felt like I was in a black hole.”

Though her father was skeptical of art as a viable career choice, her mother and sister, seeing Bethel’s spiral into depression, convinced him she would be better off in art school. He insisted she go first to Northern Virginia Community College to make up the classes she had failed at JMU. The unexpected boon of that experience was a class in disability law that helped Bethel learn how to advocate for herself.

She subsequently won another portfolio scholarship in 2001—this time to the Savannah College of Art and Design (SCAD) in Georgia. Soon her work was so good it was gracing the walls of the school and she was working with real clients on class projects.

SCAD’s campus was very accessible, she says, giving her the freedom to walk around without assistance. Teachers spent extra hours with her, devising creative work-arounds for tasks that her vision made difficult, like cutting presentation mats without slicing off a finger. 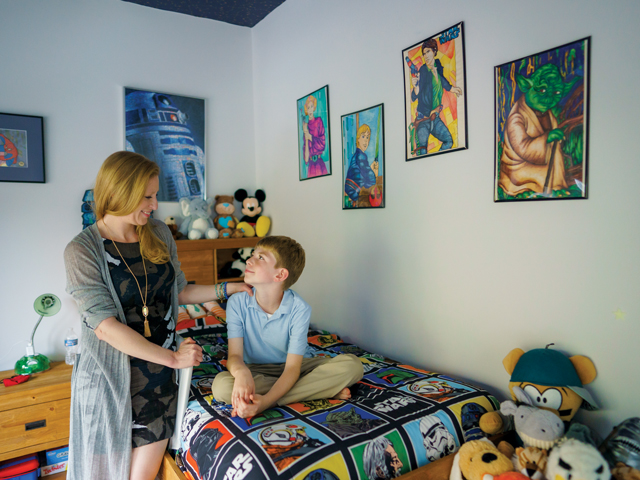 The college had a good support structure for students with disabilities. When teachers presented information at the front of class, Bethel had a monitor right in front of her to follow along. She’d found her paint-splattered tribe.

Bethel graduated in 2004, just five years after finishing high school and despite the detours at JMU and NOVA. After college, she did design work for a defense contractor and then at an ad agency specializing in issues advocacy.

Along the way, she married and had two sons—Connor, now 10, and Liam, 2. (Neither inherited ocular albinism. Connor sweetly serves as a guide for her when they are out walking.)

Around the time Connor was born, she left behind the unpredictable hours of agency life and opened her own business, JMB Design Center. Her home-based studio holds a rainbow of art supplies, with brightly colored paintings of hers on the walls.