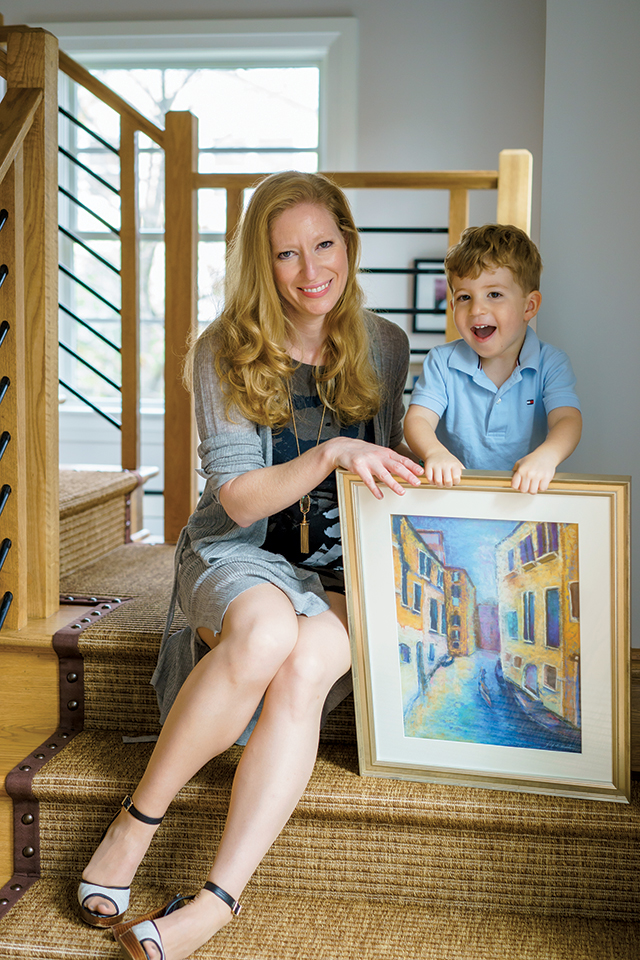 The artist with her son Liam and one of her paintings. Photo by Matt Mendelsohn

Clients describe Bethel as an exceptional listener with a gift for distilling complex ideas in graphic form.

“From the start, she got us,” says Marty Stone, a former client whose D.C.-based political consulting firm, Stones’ Phones, got a new website and full rebrand from Bethel in 2012. “She did a much better job than I did in explaining what I do, then she was able to graphically represent that.”

Stone still remembers being struck by Bethel’s unorthodox creativity—like her suggestion to present a proposal in story form, chronicling the steps of a political candidate on the path to victory.

“Maybe she gets people’s stories and translates that on paper because she is absorbing it in total,” he says, “not just visually.”

Kevin Corcoran, CEO of the D.C.-based Eye Bank Association of America (EBAA), which organizes donations of ocular tissue, agrees. “She listens more carefully than other designers I’ve worked with—I’m not sure if that’s her vision impairment or her nature. It results in better work.”

This past spring, Bethel was organizing a photo shoot for EBAA in Texas with a young cornea recipient and the transplant team that had helped her. Then the pandemic hit, making travel next to impossible, especially for someone who needs a guide to get through airports. Social distancing also threw a wrench in the plan for a group shot.

Bethel was unfazed. She hired a photographer in Texas to shoot photos of each person individually against a green screen, remotely art-directing the angle and pose she wanted each person to assume. Then she painstakingly stitched the images together in Photoshop to make it look like the people had all been photographed together in one place. “She brought her heart into this work as much as her skills,” Corcoran says.

It’s not the first time Bethel has diverged from the designer’s usual playbook. She recalls an ad campaign that sent her traipsing around a forest in the dead of night with her husband, Sean (who guided her over rocks and tree roots), to set up a photo shoot depicting the splendor of a lakeside campground at sunrise. The project had a tight deadline a few hours later, so she set up a mobile design studio right there in the woods and finished the layout on location.

The magnifying functions on today’s smartphones and design applications are both her friend and nemesis. An admitted perfectionist and stickler for details, she uses them to painstakingly tweak the tiniest visual elements, from color gradations to typography. She once kerned an entire report, line by line, making infinitesimal adjustments to the spacing between letters.

Arlington is a good place to be if you are a blind person, Bethel says. Many essential services are within walking distance, and Uber and Metro are readily available, although she’s been reluctant to use public transportation in Covid times.

Thanks to mobility training (whereby she learns to walk set routes with a coach), she can navigate solo to certain locations she visits regularly. “You live your life by memorizing one path,” she says. “If the path gets messed up, you freak out sometimes.”

Bethel doesn’t have a service dog. With two young kids and a business to run, she says she doesn’t have time to care for an animal.

And she’s too stubborn to use a cane. She occasionally pays the price by tripping off curbs and walking into parking meters, “but I never do it twice,” she stresses. “Once I walk into something, I remember it is there.”

(Don’t dare challenge her to a game of H-O-R-S-E. Her spatial memorization skills are so good that once she learns the angle of the shot, she can sink each basket thereafter from muscle memory.)

What little vision she does have disappears with the sun. When she has to walk home in the dark, she clips flashlights to her pants, backpack and other spots to create a ring of light to walk in.

“I can’t wrap my head around thinking of Jen as someone who’s visually impaired. I don’t think of her that way,” says her onetime dance class companion Mormann, a former real estate agent (who, for a time, also became one of Bethel’s clients).

If she were pointing Bethel out to someone new, Mormann says, she wouldn’t think to use blindness as an identifier. Instead, she might characterize her friend as the one who looks like a buff pop star: “I would describe the really fit blonde with Madonna arms and great shoes.” (Bethel does confess to having a weakness for footwear—even 4-inch heels that would trip up a fully sighted person. She loves the different colors and designs, and keeps a special closet with glass shelves for her collection.)

But her biggest shortcoming may be her unwillingness to ask for help.

She says it’s ingrained. Fighting back against that bully nearly three decades ago made her feel like she was in control and able to protect herself. “Sometimes it puts me in survival mode, like I have to do everything on my own.”

Lyon Village resident Kendra Liebert met Bethel five years ago while the two were working on a school auction for Arlington Science Focus Elementary. (At the time, both had kids there; Bethel’s son Connor now attends Congressional School.)

A year passed before Liebert even realized her friend was blind. They were having lunch one day when Bethel held her phone so close to her face that Liebert asked why. She was stunned by the answer.

They started running together, with Liebert as a guide. Bethel went on to complete two triathlons.

It didn’t matter that she’d taken a nasty tumble years earlier while running the Army Ten-Miler. The pavement texture changed and it threw her off.

“I fall a lot and you get over it,” Bethel says matter-of-factly. “I’m like a toddler learning to walk.”

During that race she’d pushed on, not realizing she was bleeding, to what she considered the most stressful part—finding her family at the finish line. Unable to see them in the crush of people, she hopped on top of a golf cart and waved her arms until they found her.

Surgery for ocular albinism wasn’t an option when Bethel was a kid. Today there are procedures that mitigate nystagmus (those involuntary eye movements), but they don’t improve vision. Bethel dismisses the option as mainly cosmetic. “I am so past caring about my appearance at my age,” she says.

Being visually impaired has an upside, she adds—in that her other senses are more attuned. She calls it her “superhero power to see things differently.”

Says Stone, her former client: “In a city where everyone is looking over [your] shoulder to find a more important person, she concentrates on the person she’s talking with. When she’s talking to you, it’s as if you’re the only one in the room.”

Bethel’s older sister, Rachel Froehlich, says she has a newfound appreciation of her younger sibling’s resilience. Froehlich recently underwent surgery that resulted in accidental nerve damage and has been coping with intense pain.
“[Jennifer] really taught me many things about not letting any physical disability slow you down or stop you from reaching your dreams,” says Froehlich, now a consultant with Booz Allen Hamilton based in California. “As soon as you start identifying yourself as a person with a disability or a person with pain, it can really limit you.”
Some potential clients might summarily dismiss the idea of hiring a blind graphic designer, says Eye Bank Association of America CEO Corcoran. They are missing out.

“I would hope this gives a message to anyone with visual disabilities or another challenge,” he says. “There really aren’t insurmountable barriers to doing what you love. There are just different ways of getting to the same outcome.”

Tamara Lytle is a freelance writer in Northern Virginia.