Virginia's capital city is having a moment in the national culinary spotlight. Our dining critic highlights the places you just can't miss. 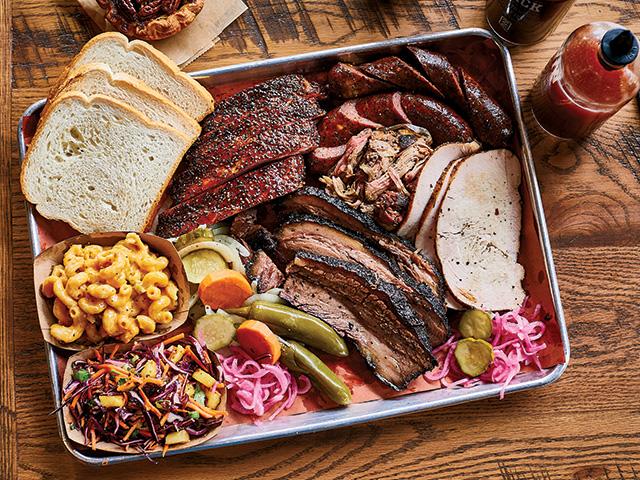 When dedicated traveling foodies research other cities, we’re not looking for museums and monuments—we comb the internet and shake down friends for the latest information on dining hot spots. That’s what led me to Richmond—along with a companion, Nycci Nellis, who co-hosts the weekly show Foodie & the Beast on Federal News Radio—for a dine-a-palooza, hitting more than 20 restaurants, bakeries and bars in 2½ days to develop a list of places that epitomize why Richmond has blossomed into one of the best dining destinations in the country.

Follow my strategy: Input the places you’d like to try on a Google map, create efficient itineraries that avoid zigzagging, and leave the D.C. area at 10 a.m. to avoid I-95 rush hour anxiety, which gets you into Richmond just in time for—lunch!

Here is my list, categorized by mealtimes. (Many of the places listed for lunch or dinner are open for both meals.) 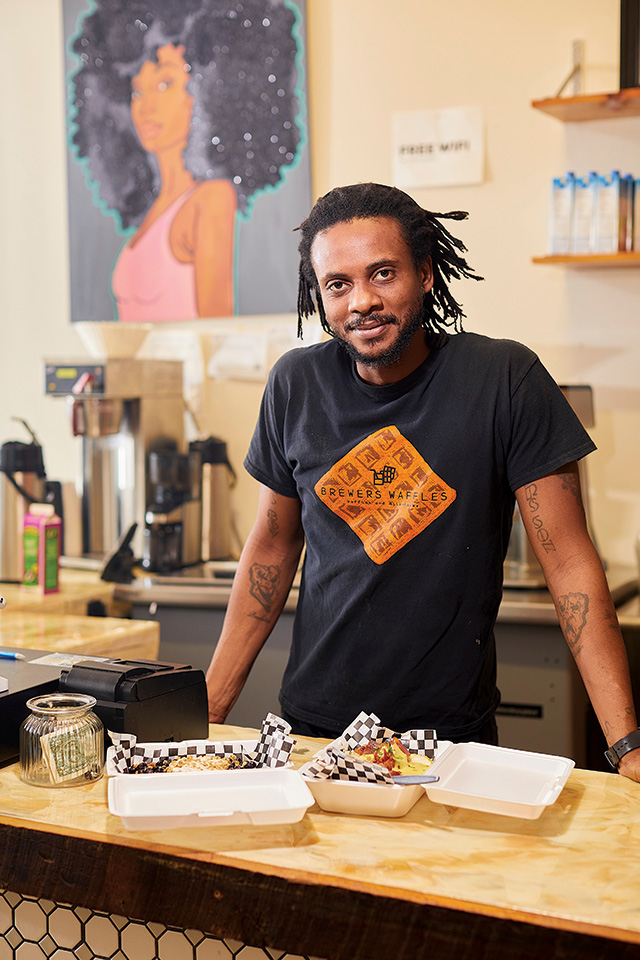 In Richmond’s Manchester neighborhood, restaurateur Anthony “A.J.” Brewer opened Brewers Waffles, a waffle and milkshake shop and art gallery, last July. You can build your own, ordering a traditional, vegan or cornbread waffle base, then adding sweet or savory toppings and sauces. If you don’t like making decisions, opt for one of the signature combinations, all named after local elementary schools. Try The Overby, a traditional waffle topped with scrambled eggs and bacon, plus your choice of cheese or hollandaise sauce. No phone scrolling is necessary while waiting for your waffle to be made. Instead, pass the time perusing the gallery’s exhibits. // 1311 Hull St., 804-658-3468, brewerswaffles.com 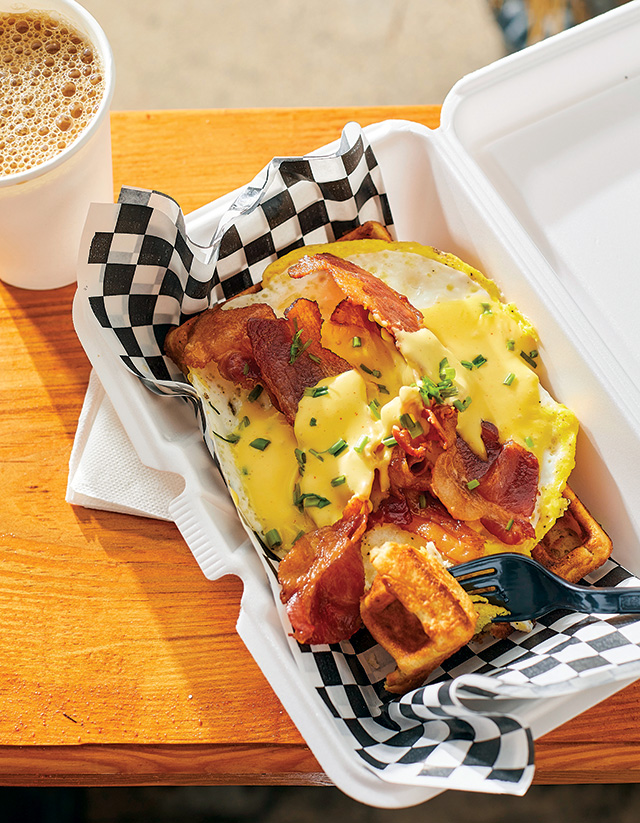 The Overby at Brewers Waffles. Photo by Tyler Darden

The original Perly’s Delicatessen Restaurant closed in 2013 after being a downtown Richmond institution for over half a century. It reopened at the same location under new ownership in 2014 with a revamped menu. Breakfast and brunch are available until 3 p.m. Look for matzo brei (a fried matzo and egg dish), corned beef hash and eggs, smoked fish, schmears and killer chocolate babka (but no pork products). We kvelled over Schnitzel Perlstein, an enormous crispy breaded veal cutlet topped with two sunny-side up eggs, smoked trout, capers and pickled red onions served with a side of potato salad. // 111 E. Grace St., 804-912-1560, perlysrichmond.com 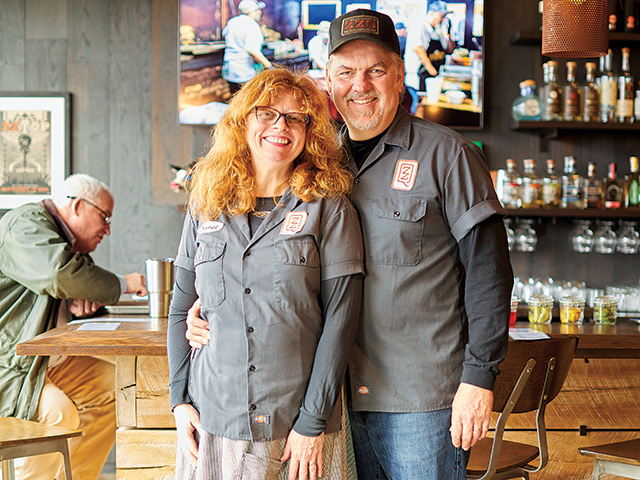 Husband-and-wife owners Chris Fultz (he’s the pitmaster) and Alex Graf left careers in architecture and opened ZZQ Texas Craft Barbeque, named after the band ZZ Top, in the Scott’s Addition neighborhood in 2018. People line up here for good reason—this barbecue is among the best you’ll find anywhere. Meats, sold by the pound in a cafeteria-like line, are smoked in a 1,000-gallon smoker with white oak. Create your own combo by asking the slicers for some brisket, a sausage link, a pork rib, turkey breast and some pulled pork shoulder. Then say yes to the proffered pickle slices and pickled red onions, and get a side of jalapeno mac ’n’ cheese and some red cabbage and pineapple slaw. // 3201 W. Moore St., 804-528-5648, zzqrva.com

Speaking of barbecue, about 20 minutes south of downtown but worth the trip is The Original Ronnie’s Barbecue in Varina, where owner and pitmaster Ronnie Logan turns out a mean rack of pork ribs from the smoker he lovingly calls Big Red. Take note: The much-ballyhooed mac ’n’ cheese is only served here on Sundays. // 2097 New Market Road, Henrico, 804-507-1575, theoriginalronnies.com 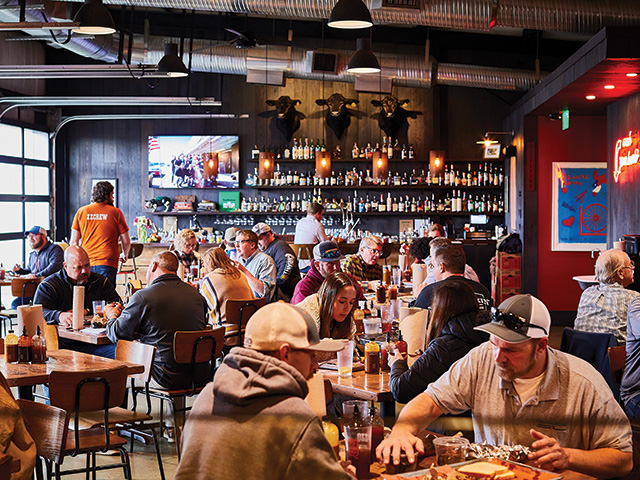 Get to Mama J’s in Jackson Ward before it opens at 11 a.m., unless you like waiting in line. Chef and owner Velma Johnson left a 17-year career as a deputy sheriff in 1999 to become a caterer and then a restaurateur in 2009, when she opened Mama J’s with her son Lester. The fried chicken and fried catfish are so alluring we ordered both, plus sides of collard greens and candied yams. Last year, Mama J’s was nominated for a James Beard Foundation award for Outstanding Service. // 415 N. First St., 804-225-7449, mamajskitchen.com

Temple, in Richmond’s Fan District, is a jewel box of a Laotian restaurant that barely seats 30. The menu offers plenty of appetizers, curries and stir-fries, but we recommend going here to scratch the noodle soup itch. There are eight soups to choose from, generous enough to make a full meal. What won my heart was the anise and cinnamon-infused duck bone broth with rice noodles, Chinese broccoli, Thai celery, green onions, garlic oil, roasted peanuts and a tender braised duck leg perched on top. // 2713 W. Broad St., 804-367-4990, templerva.com

Richmonder Brittanny Anderson made a splash when she debuted her alpine restaurant Metzger Bar & Butchery in Union Hill in 2014 and garnered a semifinalist nod for Best Chef Mid-Atlantic by the James Beard Foundation in 2017. Then lightning struck again—the foundation nominated Anderson in 2018 for Brenner Pass, the Scott’s Addition place she’d opened a year earlier. The airy contemporary setting brings a smile to my face, as did a bowl of littleneck clams topped with mortadella, pickles and carrots in a rhapsodic Marsala and butter-enhanced clam broth. // 3200 Rockbridge St., Suite 100, 804-658-9868, brennerpassrva.com 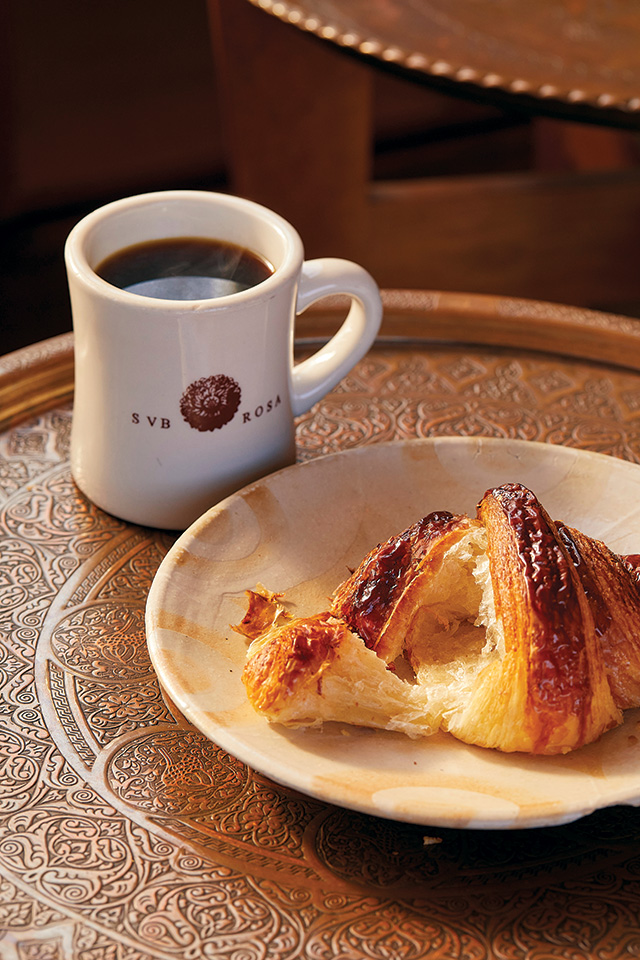 Brother-and-sister Evrim and Evin Dogu were James Beard Foundation award semifinalists for Outstanding Baker in 2017, 2018 and 2019. Go to Sub Rosa Bakery in Church Hill and discover why. They stone-mill wheat, corn and rye in-house and bake in a wood-fired masonry oven. The croissants, pain aux raisins and seeded braided pastries are extraordinary, as are the lamb boreks (savory Turkish pies). Sip on a latte in the charming cafe and contemplate the breads you’ll take home. (Check the bread schedule online.) Polenta loaf, made with heirloom corn, is life-altering. // 620 N. 25th St., 804-788-7672, subrosabakery.com 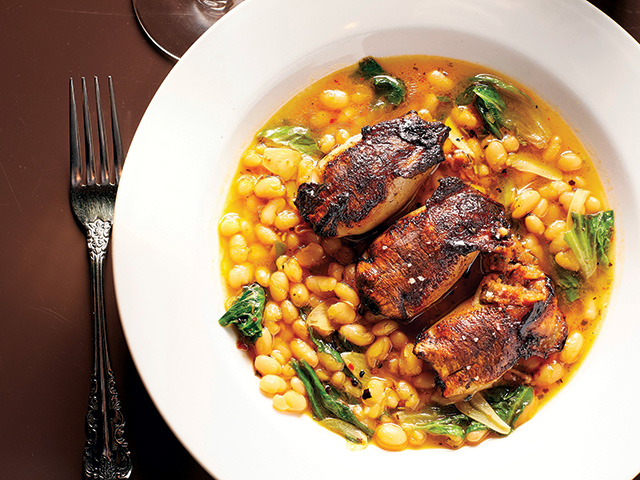 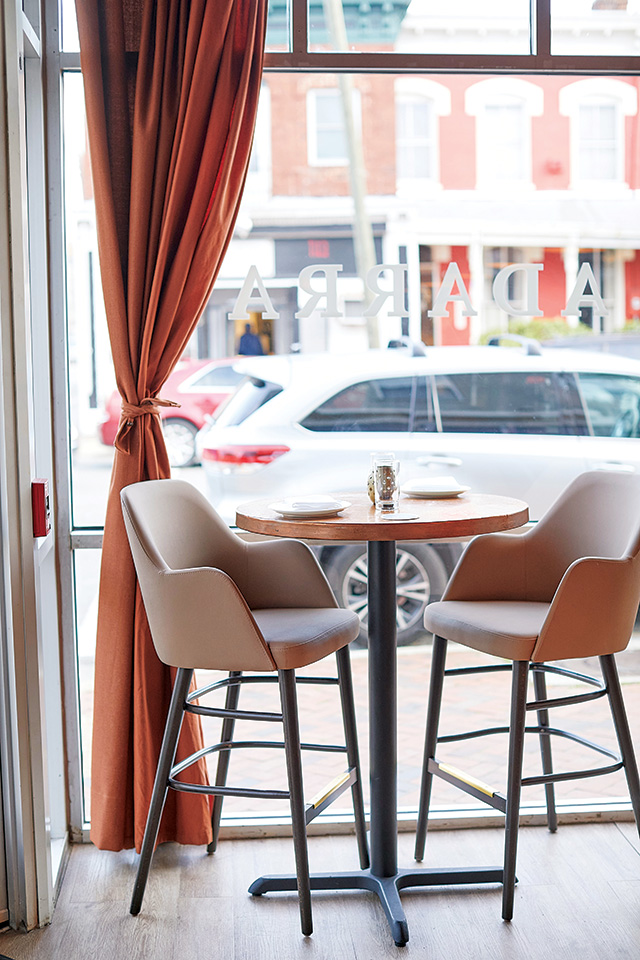 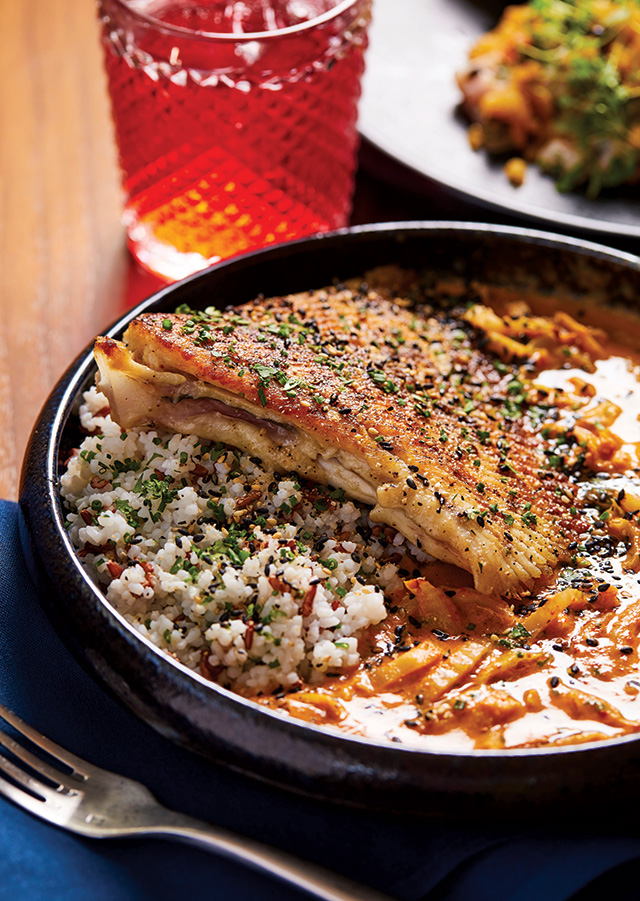 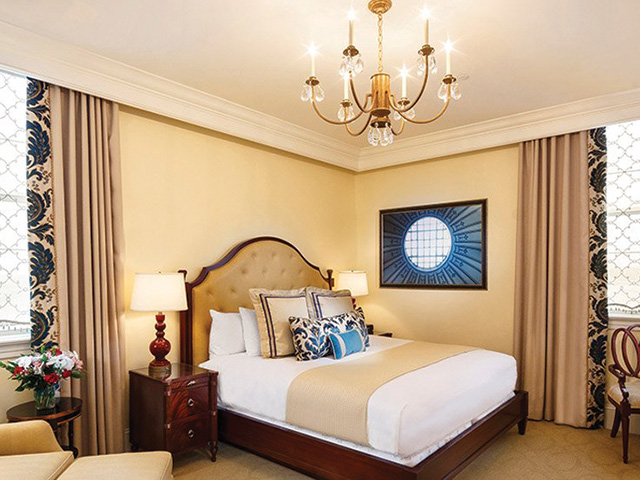 Courtesy of the Jefferson

The Jefferson Hotel celebrates its 125th anniversary this year. Inside the 181-room Beaux Arts-style hotel, which completed a four-year renovation in 2017, massive marble columns, a stained-glass rotunda ceiling and entrance-worthy staircases take your breath away. Beautifully appointed rooms feature marble bathrooms with double vanities, a walk-in shower and a soaking tub. This majestic hotel is all about comfort, service and pampering. Don’t miss afternoon tea in the Palm Court lobby (where a statue of Thomas Jefferson resides) and Sunday brunch in the rotunda lobby, at the bottom of the grand staircase. Rates start at $275. // 101 W. Franklin St., 888-918-1895, jeffersonhotel.com 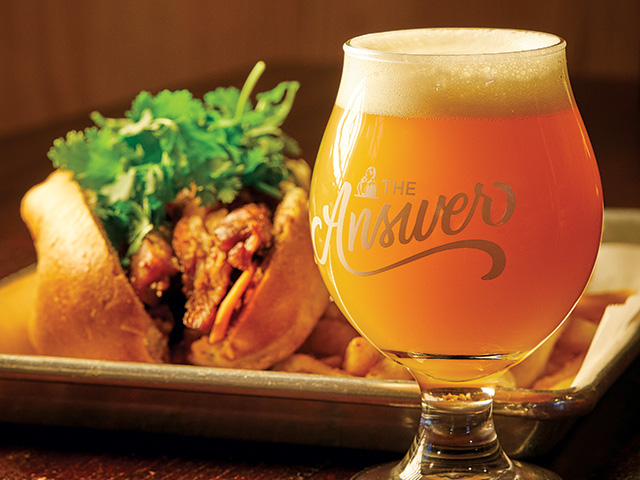 Traditional banh mi with a Birds Don’t Give a Flock IPA at The Answer. Photo by Tyler Darden

Where to Have a Drink

There are more than 200 craft breweries in Virginia, and more than 35 in Richmond. (For a full list, check out richmondbeertrail.com.) Here are three intriguing examples. The Answer Brewpub (6008 W. Broad St., 804-282-1248, theanswerbrewpub.com), whose owner, An Bui, is a two-time James Beard Foundation award nominee for Outstanding Wine, Spirits, or Beer Producer, has 56 beers on tap and superb stouts. Triple Crossing Brewing Co. (113 S. Foushee St., 804-495-1955, triplecrossing.com) in downtown Richmond has some of the best IPAs in the region. At Tabol Brewing (704 Dawn St., 804-303-5528, tabolbrewing.com) in Northside, co-owners Nic Caudle and Travis Dise produce fine saisons and sours.

Women rule the scene at many of Richmond’s restaurants by developing stellar craft cocktails and overseeing the beverage side of these establishments, including Katy Best at Alewife, Shannon Hood at Brenner Pass, Lindsey Scheer at Heritage (1627 W. Main St., 804-353-4060, heritagerva.com) and Beth Dixon at Perch (2918 W. Broad St., 804-669-3344, perchrva.com).

David Hagedorn is a writer from Washington, D.C., and the restaurant critic for Arlington Magazine and Bethesda Magazine. He is also the coauthor of several cookbooks, including Rasika: Flavors of India.

Get Away: Richmond’s Art Museum