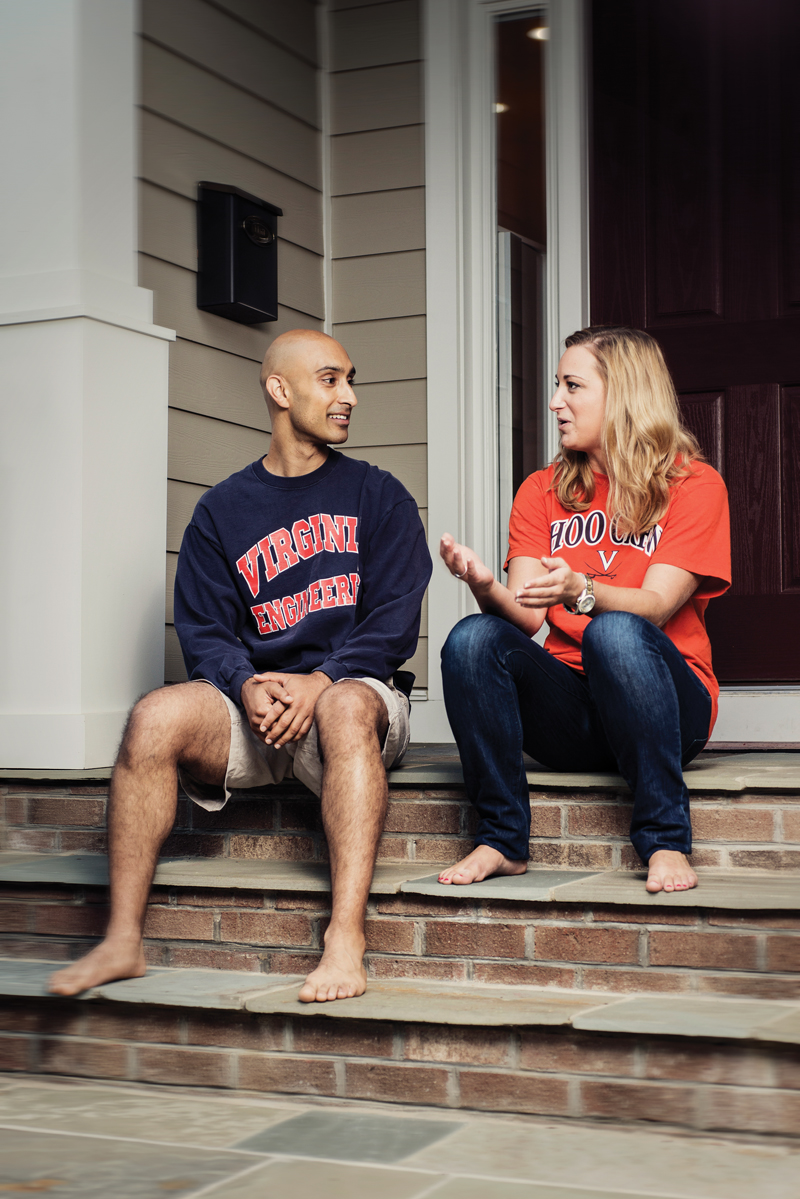 For Sunny Disoco, the desire to give back was manifested closer to home. In 2002, when he was 28, DiSoco established the “Ideal Scholarship” fund at his undergraduate alma mater, the University of Virginia.

Since then, the need-based scholarship has provided $3,000 in tuition assistance every year to a student who demonstrates excellence in leadership, citizenship, academics and idealism.

Now an adjunct professor at American University’s Kogod School of Business in D.C., DiSoco also has served as a mentor to two scholarship recipients (each was awarded his scholarship annually through four years of undergraduate study).

“I [saw people] letting go of their dreams because they were faced with the reality of bills and student loans,” he says. “I thought if I could reach people as they were entering college, I could relieve some of that pressure.”

Sometimes giving can be a therapeutic way of coping with pain and loss. “There’s often a decrease in depression and anxiety for people who volunteer because they’re not consumed with their own sadness,” notes Jackson-Cherry of Marymount University.

This has been true for Bob Hisaoka, a McLean resident who runs several successful automobile businesses in Northern Virginia, Maryland and Kentucky. When his sister, Joan, a prominent public relations executive, lost her battle with cancer in 2008, he looked for a positive way to continue her legacy.

“Before she passed away, Joan had expressed that she wanted to invest in programs that enriched the lives of people living with cancer, like the ones that benefited her,” Hisaoka explains.

To honor his sister’s wishes, he now orchestrates an annual gala that raises roughly $1 million every year for support organizations such as the Smith Center for Healing and the Arts in D.C. and the Life with Cancer program at Inova Fairfax Hospital. Both programs offer services ranging from support groups and healing retreats to wellness classes.

“We’ve all been touched by cancer in some way,” Hisaoka says. “Our focus is on people who are living with cancer. We’re not trying to raise money for research. We’re trying to change things [for them] immediately.”

Their healing process, he says, has been healing for him, too.

Less Than a year after the loss of their son John, Suzie and Bill Buck are engaged in a similar journey as they come to terms with their grief.

In addition to setting up a memorial fund to subsidize needy clients of Phoenix House, they have pledged a considerable financial gift to the nonprofit—enough to name a basketball gym in the family’s honor—which they will continue to fund in installments over several years.

“We also ended up bringing carloads of John’s clothes down to Phoenix House for the guys who needed outfits for jobs and interviews,” Suzie says, fighting back tears. “It was sad, but it was also cathartic. It made me feel that I was doing a good thing.”

When it comes to financial giving, how can you gain the most philanthropic bang for your buck? Experts offer a few tips.

Concentrate your giving. Spreading out your donations among too many causes brings more direct mail and dilutes the impact of your giving, in that each charity ends up spending a greater percentage of your donation on processing costs. Jeff Schragg, a partner at McLean-based accounting firm Argy, Wiltse & Robinson, estimates that 20 percent of his clients include planned giving in their budget. “They [target] the specific philanthropies they want to support, then decide how much they need to give in order to make an impact,” Schragg says. “This usually works out to about 3 to 5 percent of their discretionary income.”

Make it a habit. Arlington-based personal budget consultant Sara Hjelstrom encourages all of her clients—including those who are on a tight budget or paying down debt—to adopt a culture of giving, even if their contributions are only $5 to $10 per month. “People get a boost in their well-being when they contribute to a cause they like,” she says.

Create teachable moments. If you have kids, involve them in family decisions about giving, Hjelstrom advises. And consider making charitable donations on traditional gift-giving occasions. Some families ask for donations of food, books or toys in lieu of birthday presents. Others employ a “spend, save, give” philosophy in doling out allowances. Many give charitable contributions instead of holiday gifts around Christmas and Hanukkah.

Offer panhandlers an alternative. Instead of handing out cash on the street (with no sense of how it will be used), offer food or assistance. “I always have fruit, snacks or bottles of water in my truck,” says Jan-Michael Sacharko of A-SPAN, a local nonprofit that is working to end homelessness.

Think big. Are you looking to gain traction for your own charitable idea? If so, the Arlington Community Foundation (ACF) may be able to help. Established in 1989, the foundation provides community grants and scholarships, but it also manages “donor advised funds” for individuals and civic groups who want to establish their own tax-deductible fundraising efforts. Arlington’s 100 Homes campaign to end homelessness is a good example. The effort began in 2009 when local developer and philanthropist John Shooshan made an investment of $50,000 with ACF and put the call out to private donors to match the amount. The fund has since grown to $500,000 from private-sector donations, and Arlington County has committed to match that amount for a total of $1 million dedicated to homelessness prevention. For more information, visit www.arlcf.org

A freelance writer in Arlington, Adrienne Wichard-Edds was inspired by the many local residents who shared their stories.