Arlington’s Past and Present In Spotlight at Local Gallery

Arlington Arts Center hosts a group show highlighting the county's ever-changing skyline and some of its notable people. 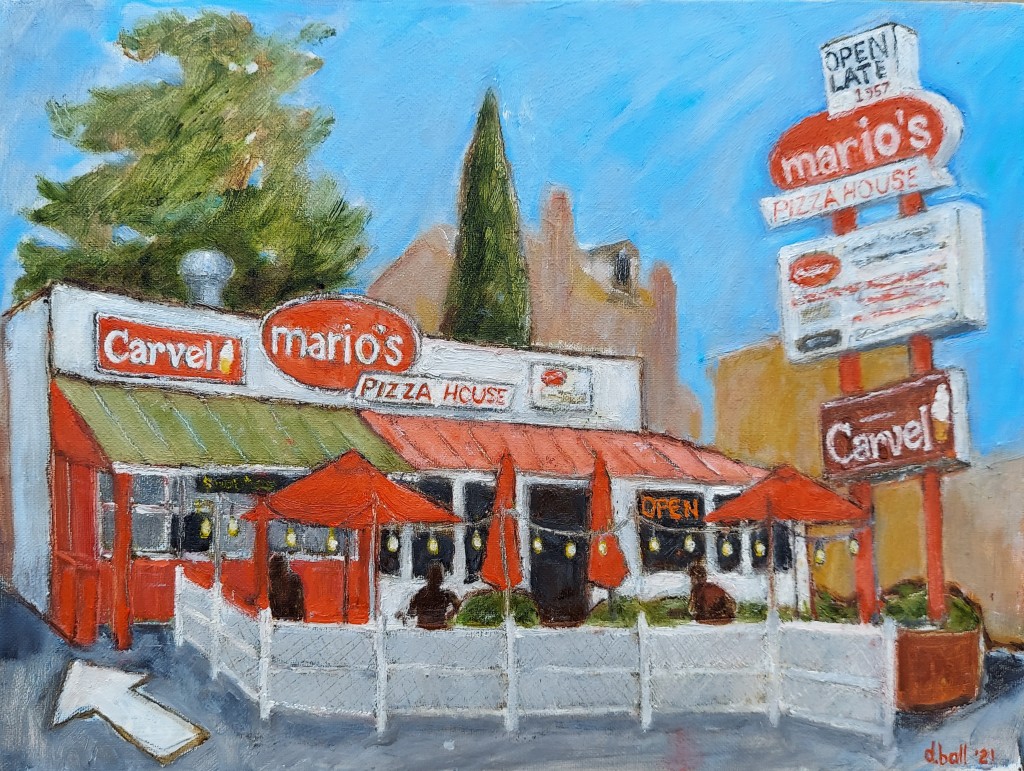 When Doug Ball takes a look around his community, he sees a study in contrasts, the old against the new.

“You’ll see in Arlington a vintage little shop or a house, and then right next door to it will be a huge building or McMansion,” says Ball, a former education professor at Marymount University. “You wonder who’s being displaced, what did they tear down, and what effect does that have on people?”

The county’s ever-changing skyline is in the foreground in New Visions, Vibrant Memories, a recently opened exhibit at Arlington Arts Center. The show, which runs through Sept. 4, assembles a collection of portraits and urbanscapes that weave a loose narrative of Arlington’s past and present.

Ball, whose work is heavily featured in the collection, was in 8th grade when he first lived in Arlington, attending newly integrated Stratford Junior High in 1961. When he returned to Arlington, settling into the Arc 3409 Art Studios in Virginia Square last year, he found the surrounding area unrecognizable and felt “disoriented.”

“When I was a kid living in Cherrydale, I knew that area … pretty well,” says Ball, who recalls playing miniature golf near what was then Parkington mall in Ballston as a child. His mother worked at a Sears department store in Clarendon. Ball remembers walking there each Saturday to ask her for spending money. “Sears is gone now, but I could not tell you where it was; that’s how much things have changed.” 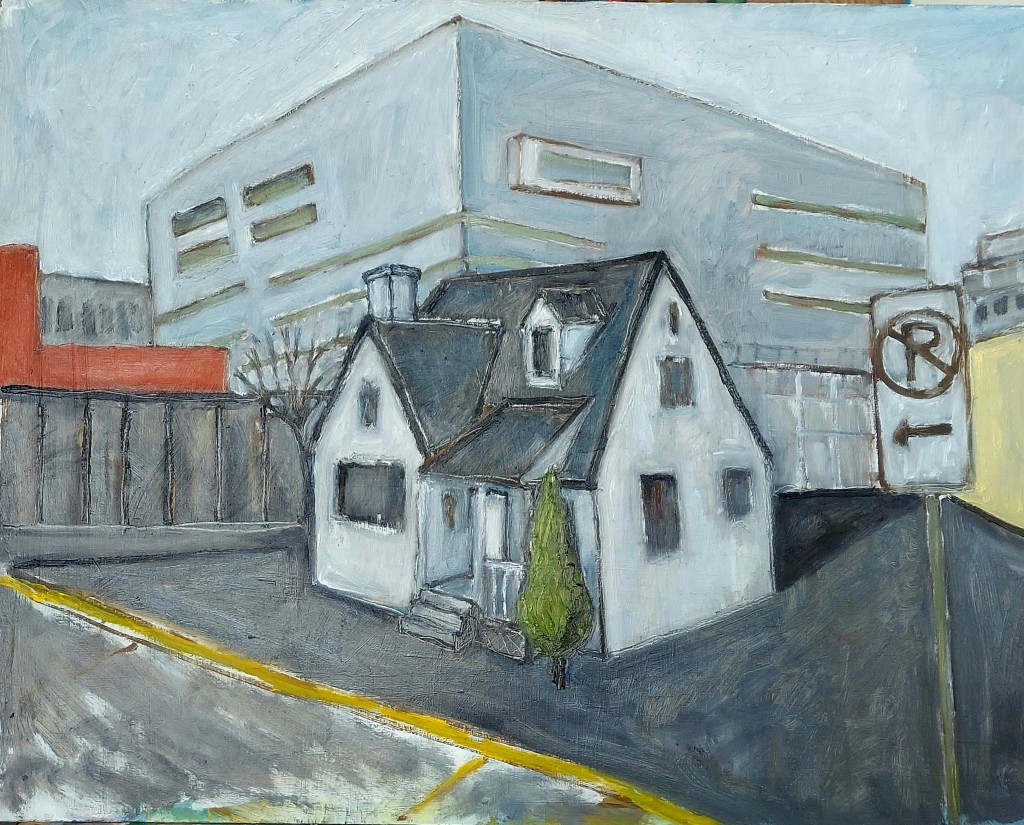 “Vintage Shadows” by Doug Ball. (Image courtesy of the artist)

One of Ball’s pieces captures the facade of Mario’s Pizza House, a Virginia Square staple for steak-and-cheese sandwiches, ice cream and square pies that’s been around since 1957. Another, titled “Vintage Shadows,” shows a solitary house that’s now part of a used car dealership. Behind it, we see the angular immensity of a modern college campus building looming in the distance.

“I’d like people thinking … ‘How fragile is the past? How vulnerable is it to being torn down?'” Ball says. “Is the community in its growth respecting the past and the legacy of the past? Or is it just building, building, building and having to deal with all the effects of that?” 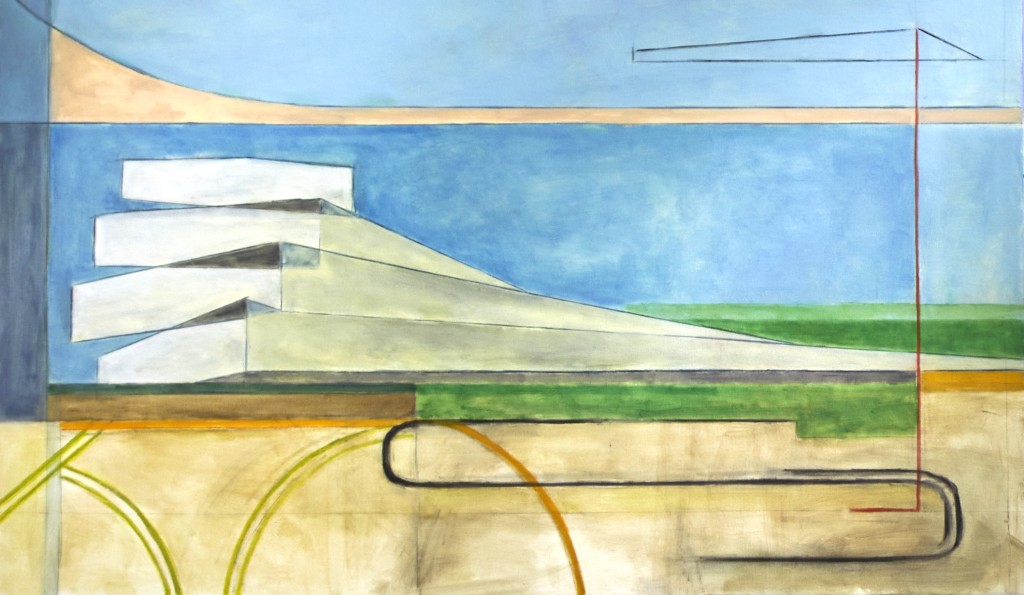 All five of the participating artists in the show are members of Arc 3409 Art Studios, across the street from Arlington Arts Center: Ball, portraitist Simone Agoussoye, photographer Hasnain Bhatti, painter and accessory designer Courtney Nguyen and painter Will Salha. Though a majority of works focus on architecture, there are also depictions of artifacts and people who have made contributions to the county’s ongoing story. 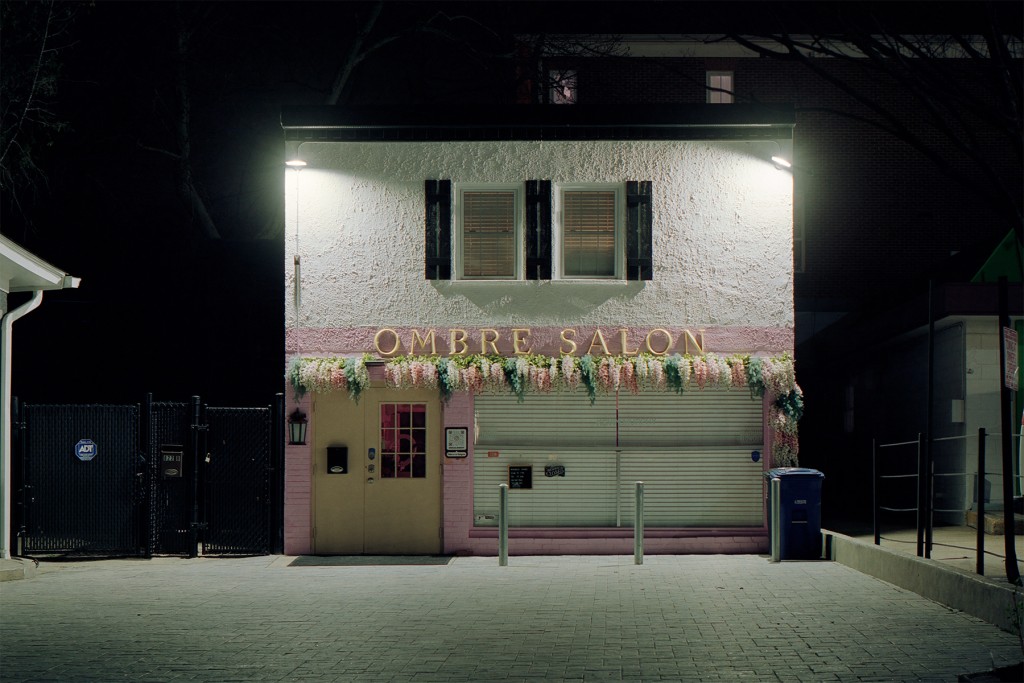 [ The Mayor of Green Valley ]

Gray is perhaps best known for saving some of President George Washington’s family heirlooms when Union soldiers invaded Arlington House in 1861. She was later emancipated and helped found Green Valley, an historically Black Arlington neighborhood. A new park near Columbia Pike is named in her honor. 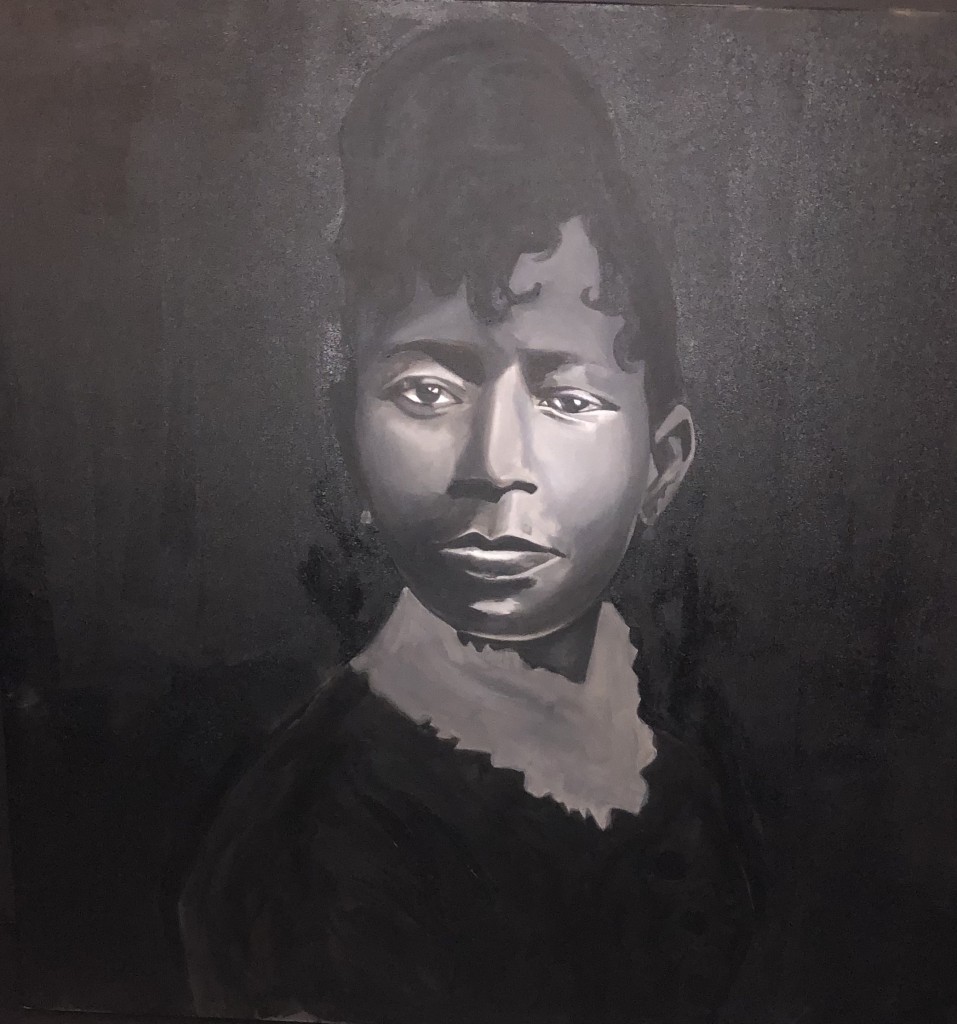 “Selina” by Simone Agoussoye (Image courtesy of the artist)

Agoussoye first learned about Gray while preparing to illustrate a children’s book on Ona Judge, who was born into slavery in George Washington’s household. When the five artists began discussing New Visions, Vibrant Memories, Agoussoye immediately knew what she wanted to create.

“A lot of talk was about doing structures and buildings … but I really just wanted to represent some of the people, and maybe people that don’t have the spotlight,” she says.

The painter often works in grayscale or even multiple shades of black. For both “Selina” and “UCME”—a portrait of contemporary Arlington-based influencer and women’s-empowerment spokesperson Sofiyat Ibrahim—Agoussoye opts for this approach.

“[It’s] representing the things that people shut their eyes at, or look away. I just wanted to explore what that physically looks like when somebody can be looking right at you but then they don’t see you,” Agoussoye says. 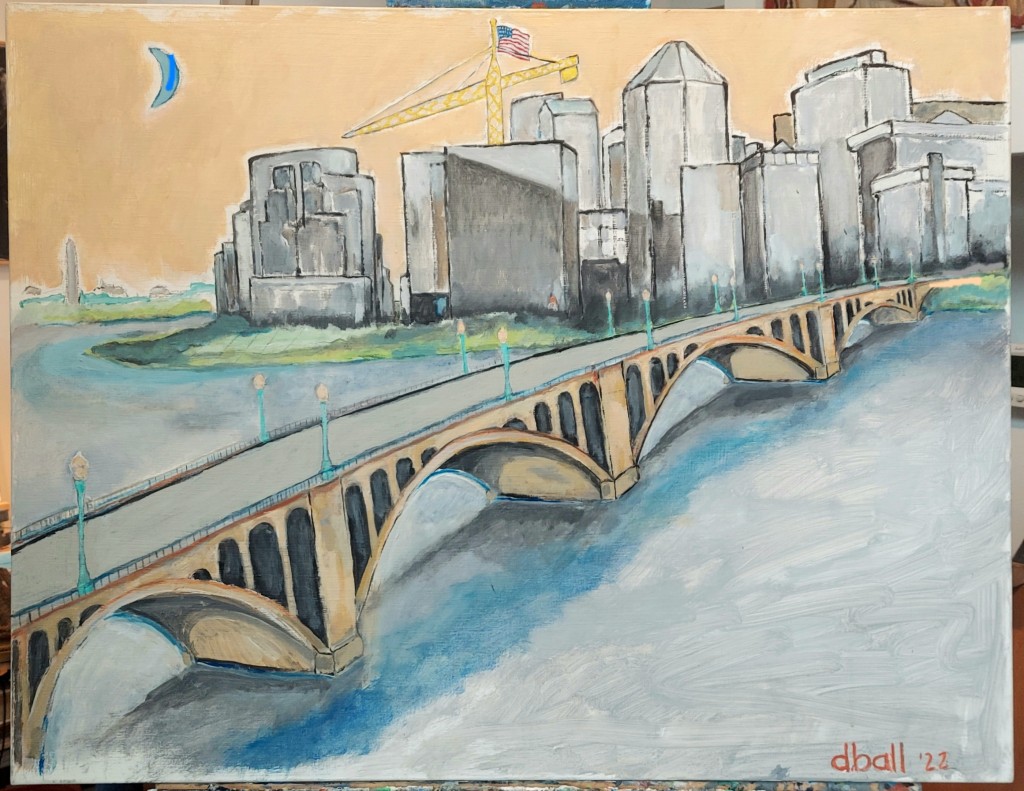 A view of Rosslyn from across the Potomac. (Image courtesy of Doug Ball)

Along one wall of the exhibit hangs a rendering of Rosslyn and the Key Bridge as viewed from the other side of the Potomac. Rising above its many geometric towers is a golden crane with a U.S. flag affixed to the top. Ball says he’s leaving it to the viewer to interpret the painting’s message.

“I know we have to support growth,” Ball says, “but what can we do to help influence the quality of growth so that it protects the well-being of the people who live and work there?” 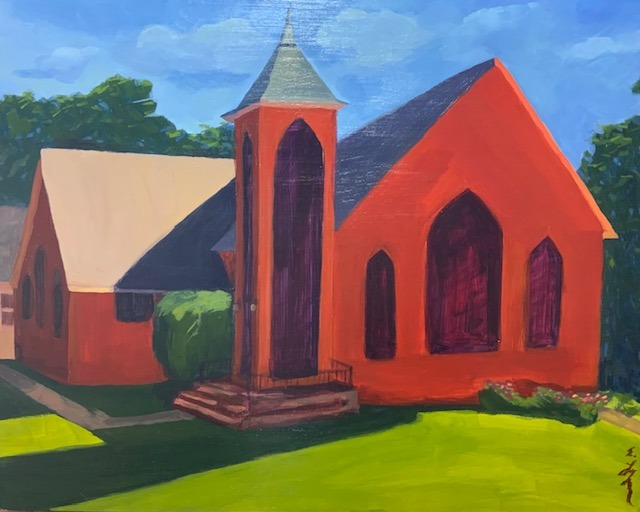 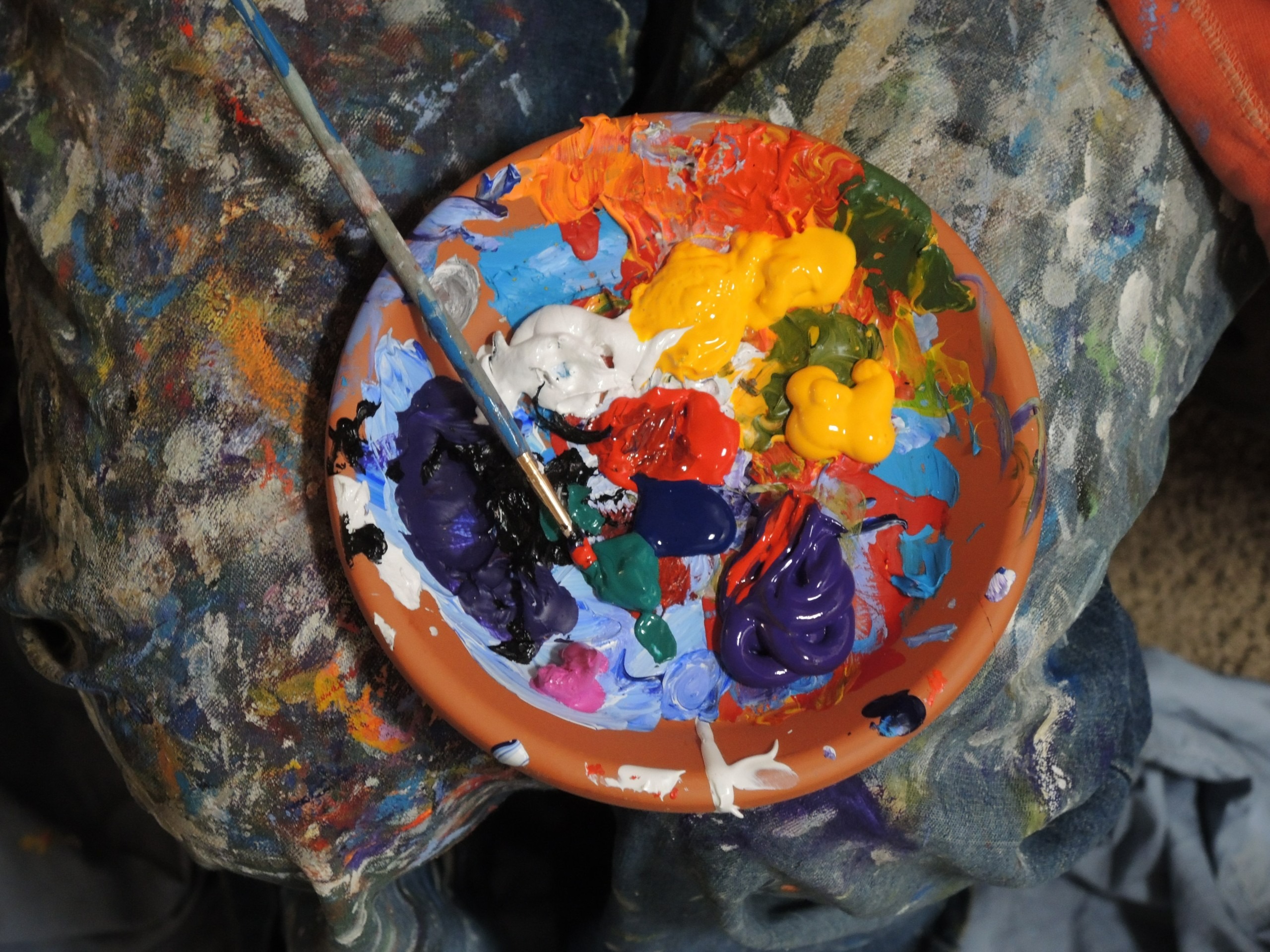 9 Places to Take an Art Class 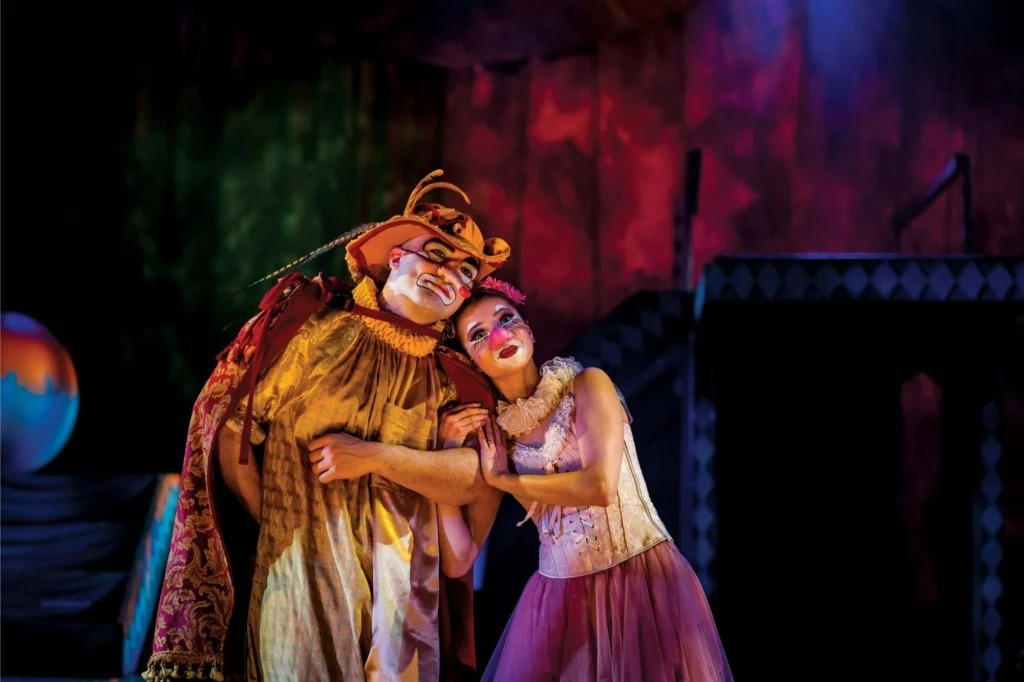