Ivan Navas is best known in the salsa world as an acclaimed conga player, but drums were not his first instrument. When he was 13, the first-generation Salvadoran American joined the marching band at Alice Deal Middle School in D.C. to get out of French class. The band director only had a tenor sax available and Navas didn’t care what he played—so long as he could skip class. 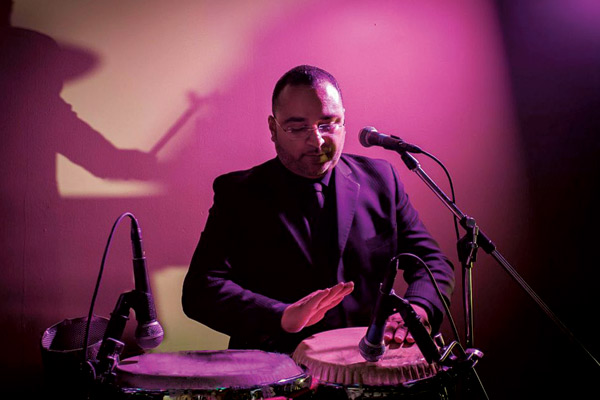 In retrospect, Navas says, he was seeking a greater escape from family troubles. “I grew up with an abusive, alcoholic father,” says the artist, 40, who lives in D.C.’s Petworth neighborhood and holds a day job as a branch manager for SunTrust Bank in Ballston. “I needed an outlet from the turmoil of the house.”

Later, while attending Bell Multicultural High School in the District, he was taken under the wing of noted Latin-American percussionist Alfredo Mojica Sr., who was teaching at the school. At the time, Navas was listening mostly to hip-hop and R&B. Latin music didn’t have any appeal to him. “It sounded like a lot of clicks and clanks,” he says. “I didn’t get it.”

But it wasn’t long before, under Mojica’s patient tutelage, Navas learned to love and excel at Latin jazz. Expanding his horizons, he tried the congas, quickly learning how to evoke rhythms and melodies from the trio of standing drums. “Playing percussion gave me another voice,” he says, “because I was able to release my emotions in a physical way.”

At 16, Navas met salsa legend Tito Puente and Grammy Award-winning jazz flautist Nestor Torres at a music workshop. Jim Byers, who arranged the workshop and now works as the marketing director of Arlington Cultural Affairs (Byers also hosts the weekly “Latin Flavor Classic Edition” radio show on WPFW 89.3 FM), remembers meeting Navas that day. “He had this wonderful energy and maturity,” Byers says. “I thought he was one of the teachers.”

The next day, Torres asked Navas to sit in with an all-star lineup at George Washington University’s Lisner Auditorium. It was an epiphany. “I realized music was a passport to the world,” says Navas, who went on to study percussion at the Harbor Conservatory for the Performing Arts in New York City.

Since then, Navas has played at the Kennedy Center, Constitution Hall, Wolf Trap, the Pentagon and the White House, sharing the stage with some of the most well-known salsa stars of the modern era, including Cuban-American crooner Celia Cruz and Grammy Award-winning singer Luis Enrique.
—Nevin Martell