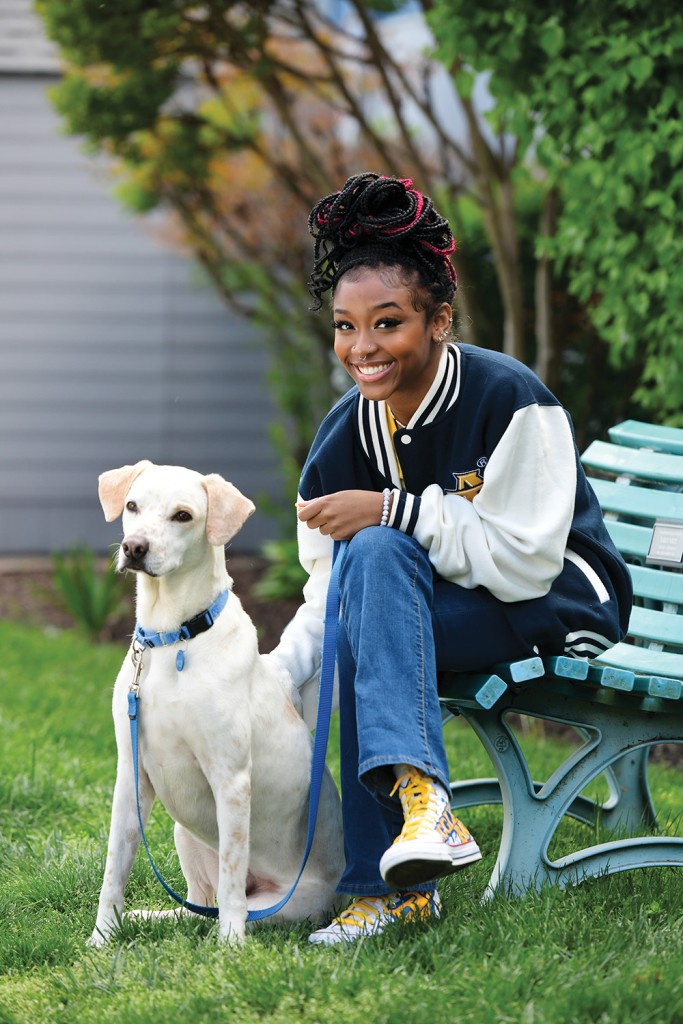 Yorktown graduate Zoe Davis with Jack, a rescue dog from the Animal Welfare League of Arlington. Photo by Michael Ventura.

As an honors student at Yorktown, Zoe Davis was a cheerleader, a member of the debate team and a Black Student Union club leader. She was a representative for Virginia Girls State, a service program of The American Legion Auxiliary that helps veterans and military families. As a sophomore, she and two friends successfully petitioned their school to add a class on African American history.

But there were times when she missed weeks of school. Davis has sickle cell anemia, a hereditary disorder that disproportionately affects Black people. It causes her red blood cells to contort into crescent-moon shapes that block the flow of blood through her veins, resulting in debilitating pain. This, too, was part of her high school experience. She remembers finishing up an SAT prep class online from her hospital bed.

So it’s no surprise that she is also a stalwart advocate for others with sickle cell anemia. As Senior Teen President of the Northern Virginia Chapter of Jack and Jill of America, which provides educational and cultural opportunities for African American children, Davis was asked to share her sickle cell journey for the chapter’s annual 5K race, which this year raised more than $14,000 for sickle cell advocacy, awareness and research. She was thrilled to share her story of perseverance while amplifying the need for more sickle cell research funding and greater access to quality care for sickle cell patients.

“Zoe is determined to show that no matter what’s thrown at you, you’re going to push through,” says Juanice Jenkins, a guidance counselor at Yorktown. “It’s an innate perseverance.”

Davis is also passionate about animals. She has five dogs of her own, spent a summer as a veterinary intern at Caring Hands Animal Hospital in Clarendon, and rounded out high school with a class in veterinary science at the Arlington Career Center, where she studied snakes, dogs, cats, gerbils, ferrets, rats, guinea pigs and frogs. (The rats were her favorites, she says, because they’re lovable and easy to train.)

This fall, she plans to study animal science and computer science at North Carolina A&T State University with the goal of becoming a veterinarian who works with domestic and exotic animals.

As someone who can be struck with pain at any moment, she holds a special kind of empathy for creatures that may be in pain, too.

“I’ve grown up sick my whole life, but I’ve had the privilege of being able to tell people what I need,” says the 18-year-old. “Animals can seem fine on the outside, but on the inside they could be in pain [with no way] to express it. When I see others in distress, the first thing I want to do is help.”