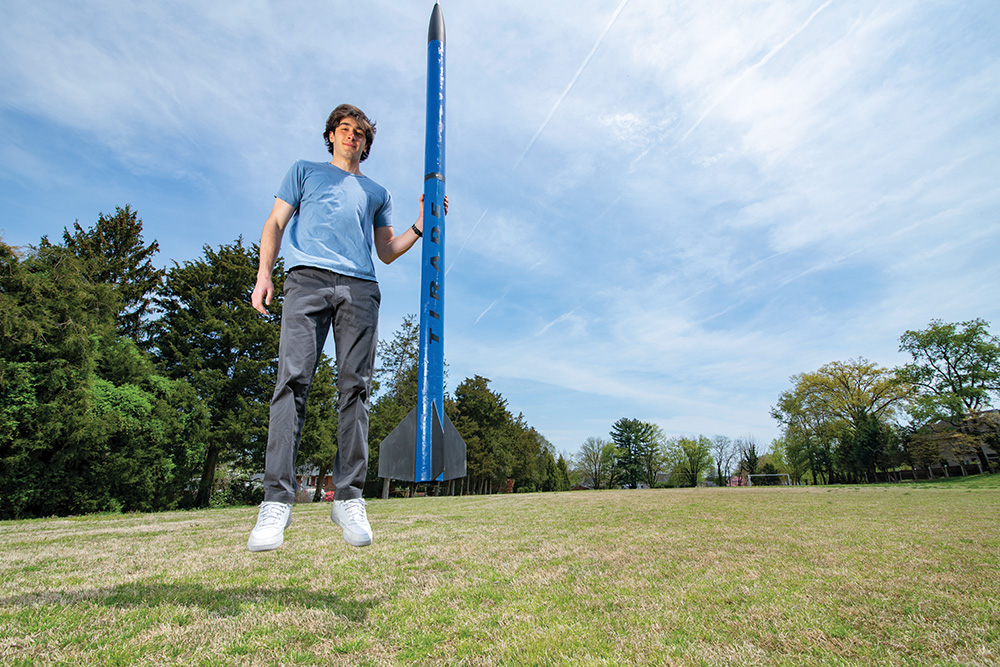 For as long as he can remember, Luke Valencic has been entranced by outer space. In elementary school, he’d dress up as an astronaut for Halloween and request space-related books for Christmas.

An engineering camp the summer after his sophomore year of high school is what propelled him to build his first rocket, from a kit. “I saw the results you can have with relatively little time and money,” says the McLean resident. “It opened the doors to all the crazy projects I do now.”

Valencic’s next rocket, built from scratch, held a mini computer with an SD card, sensors and a battery that enabled him to monitor the rocket’s altitude, temperature, acceleration and velocity. He describes that prototype as “super over-engineered and impractical, but it was much more satisfying using one of my creations rather than going out and buying someone else’s.”

As a junior, he joined the National Association of Rocketry, a nationwide hobbyist group, and earned its Level 1 certification by designing a 9-foot-high fiberglass rocket that weighed 8 pounds and flew to a height of 1,200 feet. He’s now working on his Level 2 certification, which requires a rocket that can fly higher and withstand increasing aerodynamic forces. He also designed a high-altitude balloon with a GPS system and cameras to take atmospheric weather readings at 90,000 feet. It flew for three hours over the Shenandoah Valley before landing in the backyard of a house.

Between his various space projects, Valencic, 18, is pretty grounded. A four-year member of McLean High School’s tennis team, he coaches tennis at the Chesterbrook Swim & Tennis Club. During the pandemic, he took up guitar and taught himself how to record and edit music. He graduated with a 4.46 GPA.

“[Luke] is someone who can grasp things very quickly, but when he does struggle to understand things, he’ll work at it until he does,” says his AP physics teacher, Jeff Brocketti. “It’s the willingness to work at it that’s somewhat unique.”

Valencic plans to attend Georgia Tech in the fall, where he’ll study aerospace engineering. Not much seems to intimidate him, except—of all things—flying. “Going on an airplane scares me a lot, ironic as it sounds,” he says. “I guess because I know all the things that can go wrong.”