With a market, a bar, comforting food and a wine club, the Falls Church cafe aims to be a one-stop shop with community vibes. 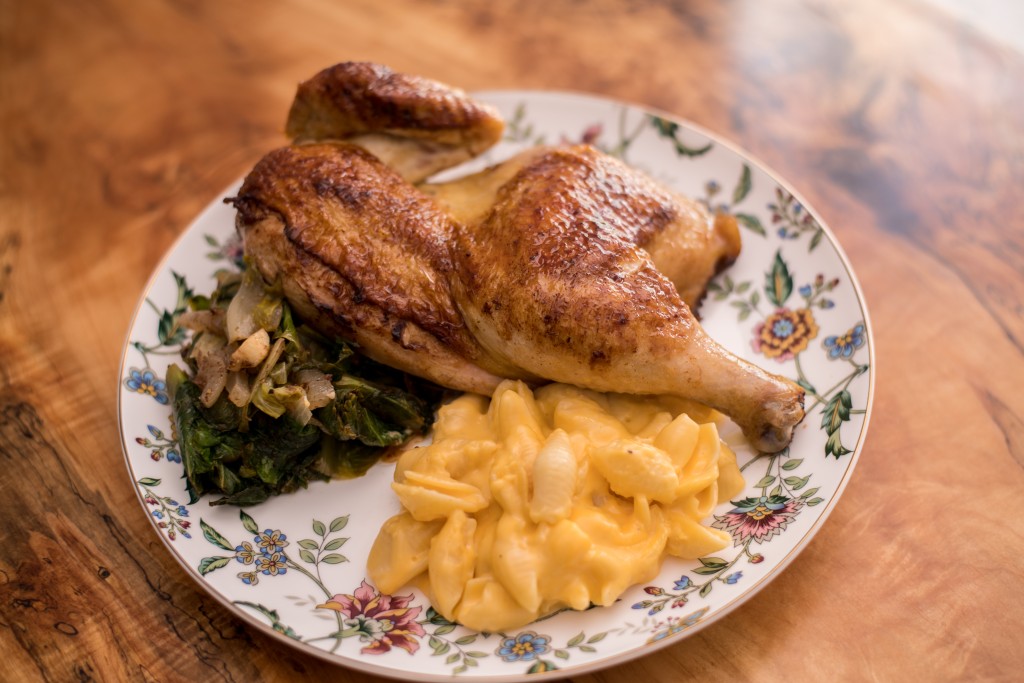 Among the many comfort-food options at Harvey’s in Falls Church is the roasted chicken, served with shells and cheese and Brussels sprouts. (Photo by Butcher Photography)

At Harvey’s—a new all-day cafe in Falls Church—nostalgia is everywhere, from the vintage Coca-Cola signs above the soda fountain, to the jar of strawberry candies near the entrance, to the checkered floor.

“When I see black-and-white floors, I remember standing in my grandmother’s kitchen and watching her cook,” says chef Thomas Harvey.

The Broad Street restaurant opened to the public on March 14, after a multi-season wait. Originally slated to debut last fall, the 2,600-square-foot eatery helmed by Harvey (The Partisan, Fire Works) was stalled by pandemic delays. Now, with a freshly installed bar, well-stocked refrigerators and ample patio furniture, it’s ready to serve up a rich menu of breakfast sandwiches, homey entrees, select beers and wines, and a banana split worth splitting. 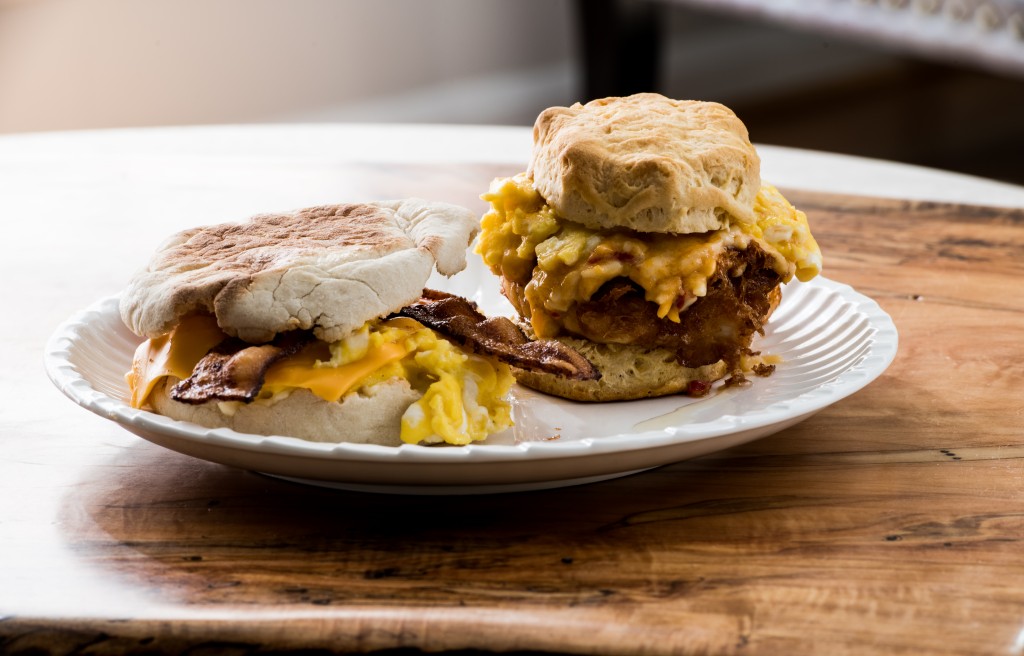 For breakfast, choose from four egg sandwiches or build your own. (Photo by Butcher Photography)

Expect what Harvey calls “modern counter service”; though orders are placed via QR code, staff members will be on hand to assist and check in on patrons. Beside the entrance, a small market carries a mix of prepared foods (think house-made popcorn and chicharrons), locally made goods such as hand-sewn aprons, beer and wine. Given that multiple breweries are pouring pints within a 3-mile radius (Solace, Settle Down Easy, Audacious), Harvey’s is placing its bets on wine sales and is launching its own wine club. For $45 per month, members will receive two pre-selected bottles and enjoy a monthly wine tasting at the restaurant.

“We’re trying to make an eclectic list, but not too expensive,” Harvey says.

For breakfast, choose from one of four egg sandwiches ($5 each), including the Sage & Smoke: scrambled egg, sage sausage, cheddar and smoked tomato chutney on a biscuit, croissant or English muffin. For an upcharge, add a side of hash browns or fruit. Drip coffee and espresso drinks from La Colombe Coffee Roasters are available, as well as an assortment of hot teas. 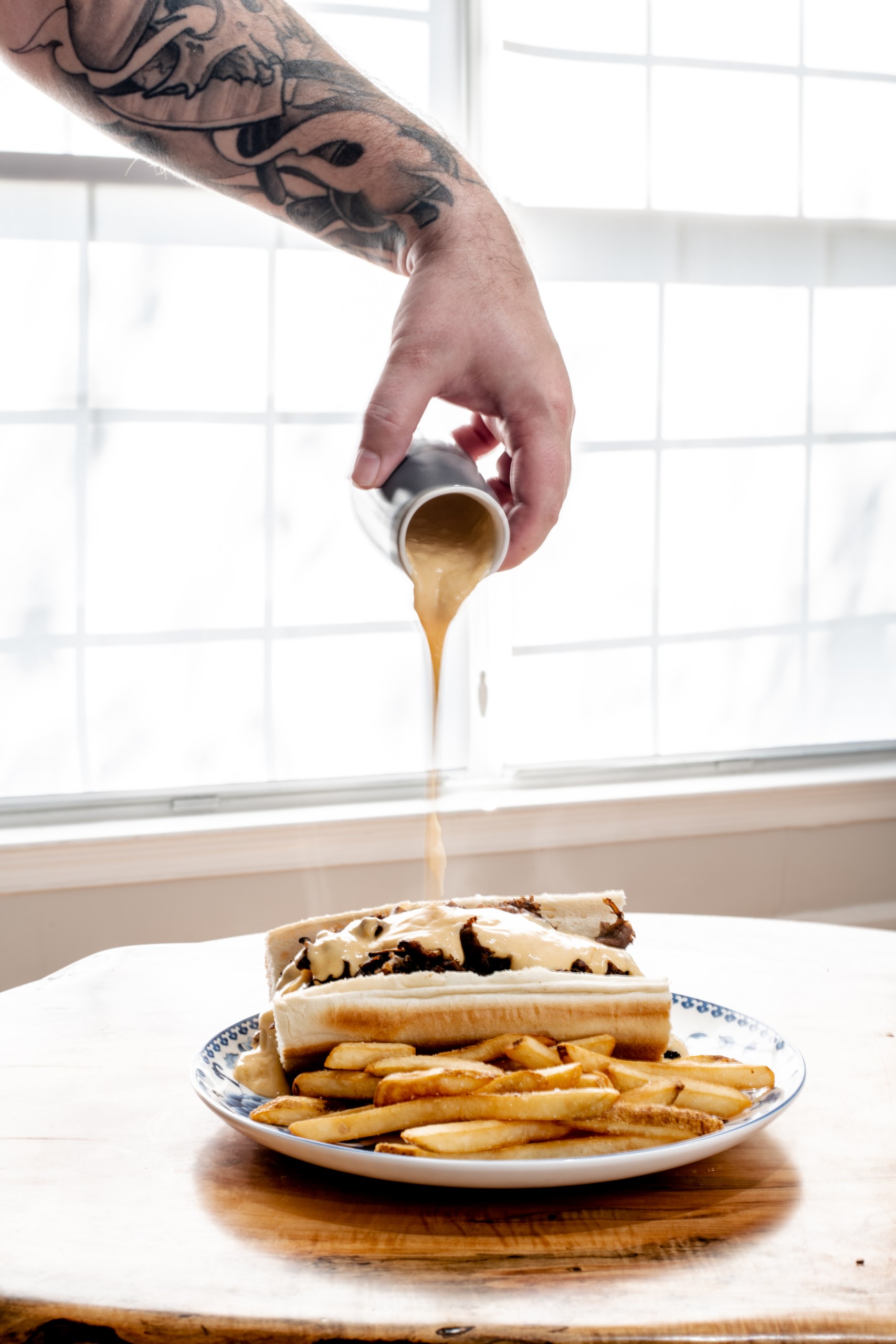 The lunch and dinner menus promise much of the fare you’d expect, such as a Caesar salad and a burger, plus several out-of-the box dishes to keep things interesting. For an appetizer, try the cedar provoleta, an Argentine cousin of provolone melted over a wood plank and served with cornichons and toast points.

The beer-cheese cheesesteak is a dish Harvey crafted using Rocket Frog India pale ale during a pop-up he did with the brewery. If you like your meat meatless, test out the Turf and Turf: portobello mushroom “steak” served with royal truffle mushrooms cut like scallops, alongside potato and onion hash, and green beans.

Though the restaurant seats roughly 55 on its outdoor patio (with a pergola on the way), consider pulling up a seat at the indoor bar, where laptops are welcome. Constructed from 20 feet of live-edge ash wood, it’s a comfortable spot to while away the hours over wings with mumbo sauce and a few IPAs. There are six beers on tap, as well as several local and nonlocal brews by the can for on-site consumption and available in the marketplace. 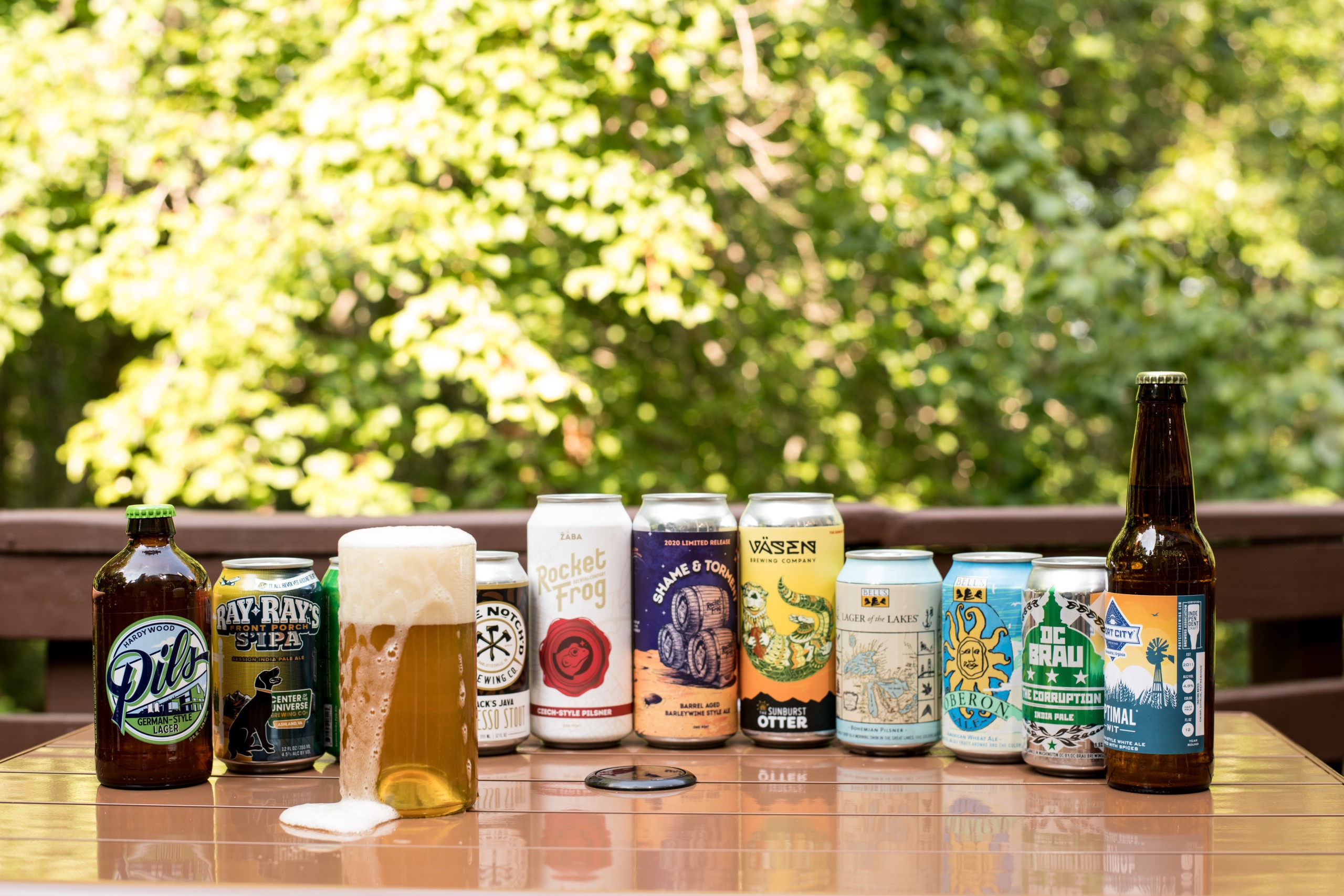 Alongside pasta salads and pastries, beer and wine are available from the on-site market. (Photo by Butcher Photography)

Harvey points out that many of the market’s specialty items can’t be found at traditional grocery stores. The notion was, “What can we provide for local people, from local people, that you can’t get easily?” he says. “Just because we’re a restaurant doesn’t mean we should hoard it all up. That’s one thing that the pandemic taught us, is that everybody still wants good food and they still want access to it.”

On the wall opposite the entrance, local chalk artist Tonia Priolo has sketched out the names of local brands whose products are used in-house and/or sold in the market, including Falls Church purveyors Disturbingly Delicious Foods and Audacious Aleworks. A mural toward the rear of the restaurant, created by D.C. studio Mural Spot, surrounds the name Harvey’s and local motto “The Little City” with images of popular food items, from popcorn to pizza to a frosted pink doughnut.

“We wanted to show fun, fresh products but also easy-grab, everyday stuff. Like a mix of, this is what people eat,” Harvey says. “Sometimes you just want a candy bar. Sometimes you want chateaubriand.”

That community-centric vibe also extends to the staff. Harvey’s offers employees health, vision and dental insurance, and shuts down the kitchen well before midnight so staff members can have wind-down time with their families.

In this, his first solo venture, Harvey is aiming to pair the congeniality of a neighborhood bar with a reimagined take on the classic “general store.”

“You come in, you have a place where you hang out with your friends, you have fun. But you get what you need as well,” Harvey says.

Harvey’s is located at 513 W. Broad St., Falls Church. The restaurant is open Monday-Thursday, 7 a.m.-9 p.m., Fridays 7 a.m.-10 p.m., and Saturdays from 9 a.m. to 10 p.m. Sunday hours will be added in the coming months. The restaurant does not take reservations. It accepts pickup and delivery orders through the Toast app.