Arlington is proudly progressive, yet its schools, neighborhoods and police records tell a different story about race. Where do we go from here? 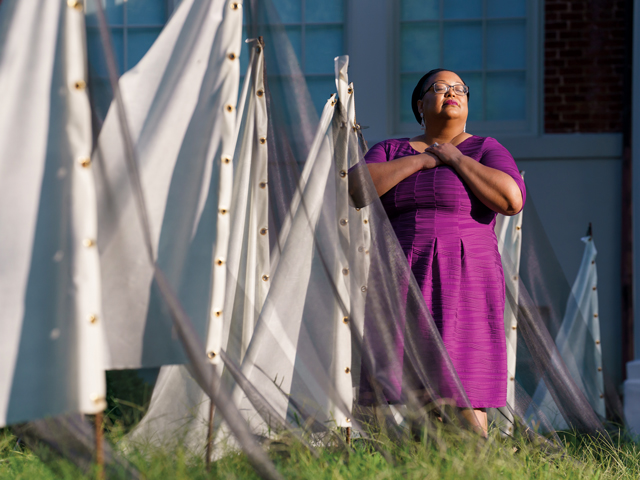 Elizabeth Jones Valderrama, 40, is the executive director of OAR of Arlington, Alexandria and Falls Church, a nonprofit dedicated to restorative justice. When she was 9 years old, she moved to Arlington from Costa Rica. She now lives in Herndon with her husband, a law enforcement officer.

For years, we’ve known that every single system is failing BIPOC [Black, indigenous and people of color]. OAR works with people who are currently in or coming out of incarceration; with people connected to the criminal legal system; and with folks who are doing community service so that they don’t become incarcerated. We see people not as problems to fix, but as individuals who have their own answers and just need the support and coaching from us.

We believe the root cause of the problems in the criminal legal system is racism. Internally, we’ve been moving our organization toward being both an anti-racist and a pro-Black nonprofit. Some of the anti-racist work we do in the community is connected to law enforcement—courts, probation, things that were initially established to do harm to BIPOC.

White people may think it’s not their responsibility—that they had nothing to do with establishing these systems. But let’s say you inherited a house from your ancestors and it’s falling down around you. You didn’t have any part in building it, but now it’s yours. Now you either have to take it down and rebuild it or figure out how to make changes so that we can all live safely in this house.

We don’t want people to dismiss racism, thinking, Oh, slavery happened years ago. No one in our generation had to fight for women’s suffrage, either, but we still take advantage of the right to vote. Unfortunately, we have all been dealt slavery’s legacy. We didn’t build this house, but we have to make it comfortable for everyone.

Transformation starts with each individual understanding how they are conditioned by a racist system, and then supporting the people around them. Each person has a sphere of influence of about 2,000 people. We want people to use that influence to make change horizontally, not just at the policy level.

Yes, go out and march and vote and advocate for change. But what’s critical to understand is that the most harm is done in a horizontal fashion—with your peers, colleagues, family members, friends.

How can you make a difference on a horizontal level? Think about who you’re hiring or promoting. Who are your leaders? What’s on your bookshelves—and what are your kids reading? What TV shows are you watching? When you pass a Black person on the street, do you treat them like a person, look them in the eye and say hi?

If you’re having a conversation that starts to feel racially uncomfortable, call people in rather than calling them out. This is not about guilt or shaming people for saying the wrong thing. We need everyone on this bus, working for an anti-racist agenda. Yes, it’s going to be uncomfortable for some people, but we need to bring everyone to the table.

White people are experiencing a different kind of suffering from racism—a suffering of the soul. It affects who they are and the collective idea of, Even if I’m good, if my community isn’t, then I can’t be OK.

At some point, people who are not anti-racist are creating harm. At OAR, we’re all about reducing harm. The way we reduce harm is by working on our racism. For BIPOC, our reason for doing this work is to achieve liberation in our lifetime. For me, as a Black Latina, liberation means that I can enter a space exactly as I am and not feel afraid. It means that not only is it OK to be BIPOC, it’s celebrated.

I’m glad people are asking questions and trying to figure out how to do better. At the same time, I’m disappointed that it’s taken so long. I’m wary that it’s not going to continue when anti-racism isn’t sexy anymore.