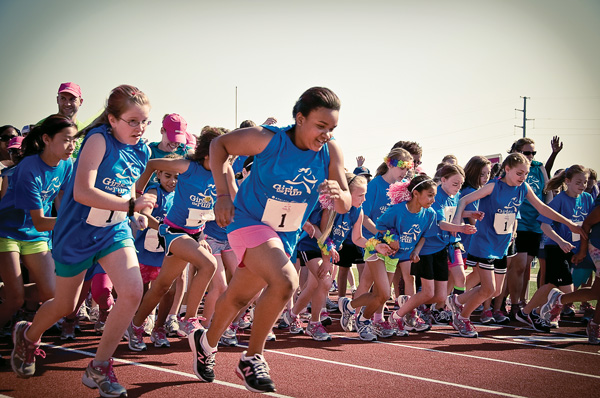 Last year, more than 50,000 runners registered for at least one of the 18 runs in the local Pacers Race Series—a string of events that included the Crystal City 5Ks and Twilighter runs, the Four Courts Four Miler, and the Clarendon Day 5K, 10K and Kids Dash. “Most of our races are shorter distances [10 miles or less] so that they can be accessible to everyone,” says Pacers race coordinator Kathy Dalby.

Adults aren’t the only ones giving running a try. This spring, 319 girls in Arlington, 33 girls in Falls Church City, and more than 1,500 girls in Fairfax County registered for Girls on the Run, a national elementary-school-based program that uses running to teach girls about health, strength of character, and respect for self and others. At the culmination of the spring session, the girls ran one of two 5K races—either in Ballston or Merrifield—where their friends, family and teachers could sign up to run alongside them. The Northern Virginia chapter of Girls on the Run is the third-largest in the nation.

In April, Falls Church fourth-grader Rheinhardt Harrison set a world record for the fastest 10-miler ever run by a 10-year-old, finishing the Cherry Blossom Ten Mile Run in the District in 1:11:24.

Cherrydale resident Ryan Shadrick Wilson would argue that running has simply become part of our shared identity. “It’s just assumed that everyone runs,” she says.

“Running is the new golf.” Shadrick Wilson serves as general counsel for Partnership for a Healthier America, a nonprofit aimed at ending childhood obesity (it was founded in conjunction with first lady Michelle Obama’s Let’s Move! campaign). She recalls being in a recent meeting on physical activity where attendees shared their personal running stories as an icebreaker.

People run for all kinds of reasons, many of them personal.

Falls Church resident Tim Rowe, 45, a former semipro soccer player, resolved to keep running after he hung up his cleats, having witnessed his father’s own health struggles. “My dad had three quadruple-bypass surgeries. It scared me to see what he went through,” says Rowe, who works in health care IT. “I have two sons now and I don’t want to do that to them. My father was a great role model for me in many ways, but he was also an example of what not to do. He really made me aware of how important it is to stay active.”

For Sarah Lee, a Lyon Village mother of two who left a career in broadcast journalism in 2011 and is now the director of public relations for Choice Hotels International in Rockville, each morning run is a race against time.

“I’m trying to defy age through strength,” says Lee, who has run 23 marathons in 19 years (she’s qualified for Boston four times, and she ran the 2011 D.C. Ragnar relay as an ultra, meaning half as many team members and twice the mileage per person).

Now 43, Lee meets up with her eight-person running group four to five times a week, sometimes as early as 4:30 a.m. “Once you start to back down, it’s sort of a slippery slope,” she says. “I have to work harder and put more thought into it now. I’ve also got to pay attention to rest and diet.”

Arlington County School Board member Noah Simon, 39, says he runs “to control my weight, clear my mind and do my best thinking. I always try to come back from my runs with one big idea.”

For the past several months, Simon has also been running in remembrance of his wife, Kedron, who passed away in December after a 15-month battle with duodenal cancer. The two met for the first time in 1998 at the Marine Corps Marathon (Simon was a runner; she, a spectator). Kedron ran the marathon the following year and they married in 2000. Running was an integral thread in their lives and their relationship for the next 13 years.

During his wife’s illness, running was a constant for Simon in an otherwise chaotic and stressful time. “Kedron knew that for my mental health and physical well-being, I needed to run,” says the Cherrydale father of two. Now the metronomic sound of his footfalls is helping to propel him through a period of impossible sadness. “It’s nice to be able to have running as a hobby,” he says. “Some people golf. Some people go to bars. I run.”

Of all the coping methods people rely on in times of grief, running is certainly one of the healthier ones. Moderate, frequent exercise is known to reduce the symptoms of depression and anxiety. McLean-based sports psychologist Jennifer Lager says that many of her clients report that running has an almost spiritual, meditative effect on them.