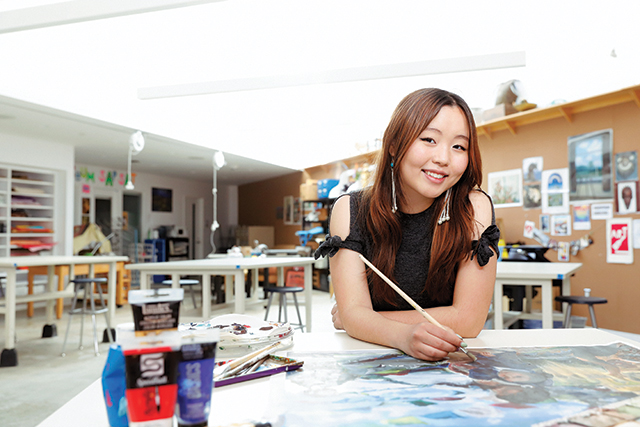 Khulan Erdenedalai was only 7 when she left Mongolia’s capital, Ulaanbaatar, and moved to Arlington, but she says she’ll never forgot the pollution that ravaged her home city.

“I’ve been pretty passionate about combating air pollution. I’ve always made artworks and films highlighting these environmental and social issues,” says the 18-year-old, whose paintings were featured in a recent exhibit, “Dreams and Nightmares,” at the Arlington Arts Center.

She intends to study environmental engineering with a possible double major in ethnicity, race and migration when she lands at Yale this fall. “I’m hoping to help protect underrepresented communities from adverse environmental effects, by designing pollution control technology, and also addressing ozone depletion and other climate change issues,” she says.

Erdenedalai already has considerable real-world experience under her belt. In 2019, she served as a natural resources and environmental technology research assistant at Virginia Tech. This spring, she completed a fellowship with PBS NewsHour, where she produced a film about Mongolia’s air pollution and making yurts more sustainable. That post came amid her involvement with Climate Cardinals, “a youth-led nonprofit that aims to make climate information accessible in over 100 languages,” she says. “I started out [last summer] by translating climate information. In 2020, I became the social media director. Now I lead a team of 40 people and help flourish partnerships with other international organizations, and I work closely with a United Nations Youth Advisory Board member.”

In addition to the numerous Scholastic Art Awards and American Visionary awards she received from The Alliance for Young Artists and Writers, Erdenedalai was named a Gates Scholar this year by the Bill & Melinda Gates Foundation. The full scholarship was given to only 300 students from this year’s pool of nearly 35,000 applicants. –Rina Rapuano