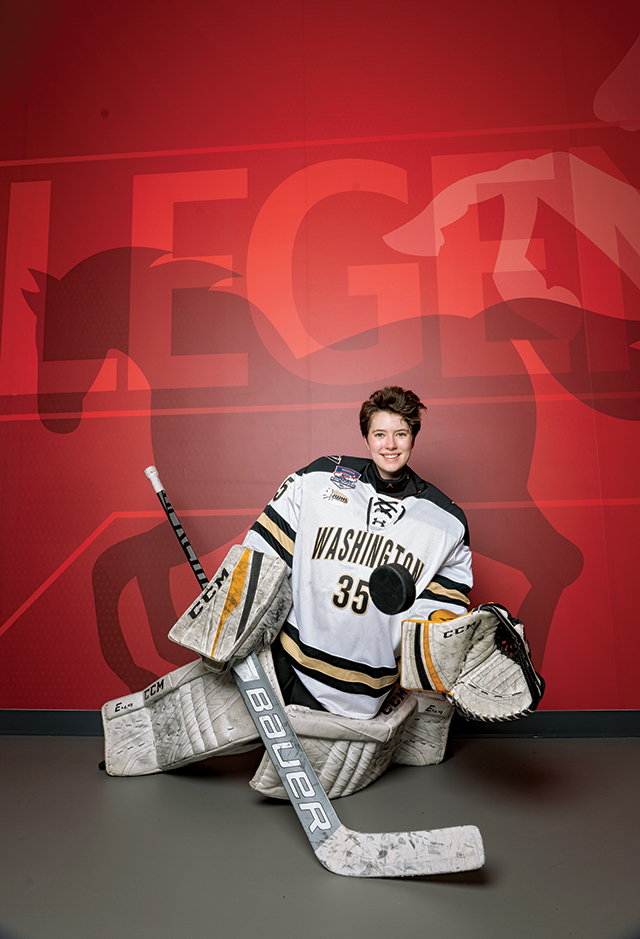 Like many Connecticut natives, Katherine Donovan’s father played ice hockey growing up. Once he had kids of his own, he signed his son up for hockey and his daughter up for figure skating. But Katherine preferred hockey.

“I had to sit at so many of my younger brother’s hockey games that I was like, well, I might as well start trying it,” says Donovan, 18. She liked the fast pace of the sport, and the fearlessness afforded by protective padding—especially in her position as goalie.

With few options for girls to play ice hockey in this area, Donovan drives from Falls Church to Rockville, Maryland, three to four times a week to practice with her team, the Washington Pride. It’s the only local Tier 1 girls team.

“As a goalie, there’s a lot of pressure on me,” she says. “I’m the last line of defense, and I spend a lot of time in the net by myself. I’ve had to learn how to manage my own anxieties and control my inner monologue. The hardest part of the game is moving on from letting in goals and staying locked in for a full 60 minutes. I have the power to change games—a timely save can motivate the team and help spur us to victory. I love knowing that I have such a huge role, that I have the power to make a difference.”

Armed with a 4.22 GPA and several college acceptances, she hasn’t yet decided where she’ll go, although she knows she wants to continue playing hockey while studying economics and Russian. For now, she’s planning to do a postgraduate year at Choate Rosemary Hall, a prep school in Connecticut.

“Whatever I end up doing, I want to travel and go to different places,” she says.

Off the ice, Donovan played guitar in the jazz band at George Mason High School and participated in the Model UN. She also helps her father coach little ones who are learning to play hockey.

“I love that they have so much fun while they’re doing it,” she says. “It’s nice to be reminded how I felt when I first started playing, because sometimes it can get a little competitive and a little crazy.”

And yet, she says, there’s an upside to that game stress. “When I play, I feel powerful. I feel unstoppable.” –Rina Rapuano