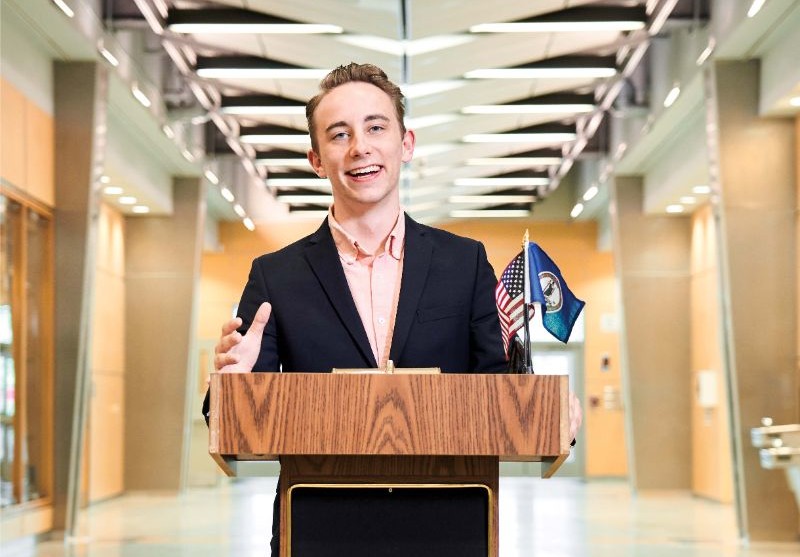 The governor had a busy spring holding a press conference, meeting with lobbyists, and vetoing and signing legislation. Then it was time to get back to high school at Bishop O’Connell.

Tommy Dannenfelser was selected as governor of this year’s Virginia Model General Assembly. He also represented the Commonwealth at the national YMCA Youth Conference on National Affairs. Both programs give students the chance to learn how government works by playing roles in the political process.

Dannenfelser, 18, lives in Arlington’s Tara-Leeway Heights neighborhood and comes by his politics genetically. His father, Marty, is a White House liaison to conservatives, and his mother, Marjorie, heads a group that supports anti-abortion candidates. He says the Model General Assembly gave him a chance to figure out his own beliefs—which he describes as right of center, falling somewhere between his conservative parents and his Bernie Sanders-loving sister.

“Learning to take issues seriously and talk about them civilly was the greatest takeaway,” he said after running the student version of the state executive branch for the annual assembly.

This fall he’ll go to the University of Virginia to study politics, philosophy and law and minor in languages. He learned Spanish, French and Latin in school and picked up Portuguese from a friend. Although he’s not Latino, Dannenfelser headed the Hispanic Heritage Club at O’Connell. He became interested in Hispanic culture doing community work, such as volunteering as an interpreter for Catholic Charities.

Looking to the future, he says he wants to go into public service, either through the military or elected office after law school. “To see how the laws we make are integral to the country made me realize the significance of law,” he says. –Tamara Lytle