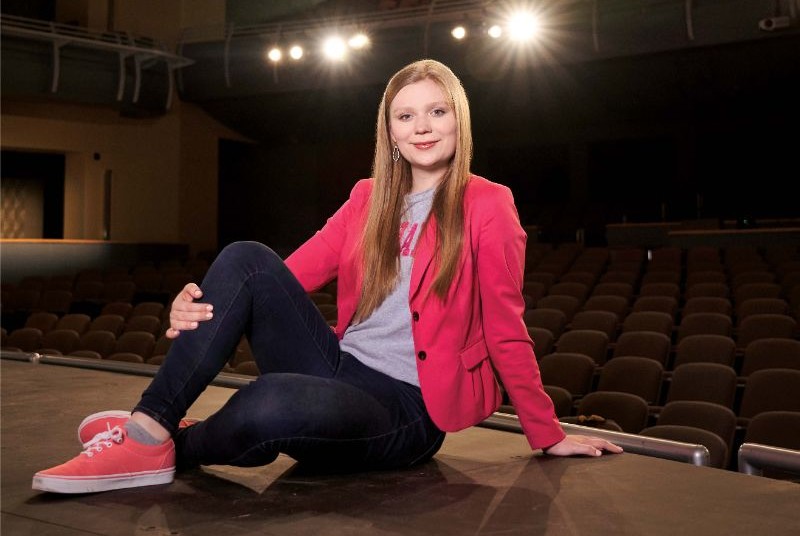 Julia Elman knows it’s an odd combination—physics and musical theater. But she managed to combine those passions at Washington-Lee in a way that seemed perfectly natural. Next year she’ll study both at Princeton.

“My brain works in numbers, not in sentences,” says the 17-year-old. When she discovered physics, “I fell in love with it. It’s math in real life and the language of the universe.”

Elman’s family lives near Yorktown, but she attended W-L so she could take International Baccalaureate and AP classes there. This summer, she’s interning at the U.S. Naval Research Lab in D.C., analyzing traces of drugs in hair samples. A high school science fair project focusing on how dyes affect the tensile strength of hair helped her win the coveted slot.

When she’s onstage, she finds “a feeling of happiness, like fitting a piece in a puzzle.”

Elman started musical theater long before physics, enrolling in summer camps at Creative Cauldron in Falls Church before she turned 4.
In 2017 she was nominated for a 2017 CAPPIE Award for her role as Berthe in Pippin. This spring, she starred as Elle Woods in the school production of Legally Blonde.

Landing that role was bittersweet for the teen, who started high school with a heavy heart because of an empty chair in choir and theater tryouts. Her friend Juliana Clarkson had died from leukemia just before their freshman year began.

Elman went on to found the Cancer Education and Action Club and raised more than $30,000 over four years for the Leukemia & Lymphoma Society’s Light the Night fundraiser—which culminates with survivors and supporters taking a nighttime walk through D.C., carrying lanterns. “It’s a [profound] moment when you see how many people have lost someone or are fighting blood cancer. It reminds me why I do this,” she says. This year she put on a talent show called Future Artists for a Cure and in seven weeks raised another $27,000 for LLS.

Elman’s had her own health struggles. In 2018 she was diagnosed with primary lymphedema, a congenital illness that causes swelling and makes dancing and wearing high heels with her costumes painful. But she has no plans to give up musical theater or her other interests.

“My head is in physics, my gut is in musical theater and my heart is in fundraising and cancer research. It makes me feel whole.” –Tamara Lytle